The mother of two and founder of Play It Forward Pittsburgh also was honored by Pittsburgh Magazine. 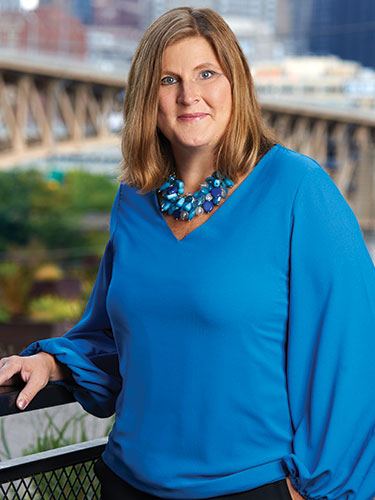 Heather Starr Fiedler, who has lived in Pittsburgh for over 25 years, has been named Pennsylvania’s 2021 Mother of the Year by AmericanMothers.org. She works as a professor at Point Park University in the School of Communications, where she serves as chair of the Department of Community Engagement and director of Wood Street Communications, an initiative to match regional nonprofits with students, She also established the first Ph.D. program for community engagement in the region.

Fiedler says she was honored to receive the award and, although aware of the nomination, never thought she would win.

“There are so many people in the city alone, much less in the whole state, that are doing such wonderful things, especially this past year during this pandemic,” Fiedler says

When asked about her proudest achievements, Fiedler first named her family. “As a mother, I’m constantly proud of the young men that my kids are growing up to be,” she says. “I’m proud that they’re really kind souls. That’s the most important thing to me.”

Her other passion is Play It Forward Pittsburgh, a nonprofit she co-founded that collects and distributes gently-used toys to children in the region. Fiedler says the pandemic almost derailed the organization’s toy drive in 2020 but despite the challenges the team provided over 2,000 families with toys.

“We worked really really hard to make it happen and had to change our entire distribution model. We made it happen. It was exhausting and thrilling but I’m so glad that we did it.”

Fiedler was recognized in October as a Pittsburgh Magazine Women & Business honoree and also founded the former site PittsburghMom.com.

“It’s really important for us to realize what a great city Pittsburgh is and the tremendous amount of really cool things there are to do here with kids. When I ran Pittsburgh Mom it was all about discovering these new things and sharing them and I still do that today because it’s just in my nature. Discovering those little hidden gems in Pittsburgh is my favorite thing to do and preach about.”

As stressful as the pandemic was, Fiedler says some of her favorite memories with her family have been created during the past 12 months.

“We slowed down and we spent time together just as a family. My kids are teenagers now, so getting that kind of undivided attention from teenagers is not an easy thing,” Fiedler jokes. “Throughout the summer last year, every single weekend, we went to a different park in the region and hiked or took our bikes on new trails. That family time that we had, just being out in nature hiking and biking with the kids before they go off and leave the nest, has been something that I’ll treasure forever.”