Meet the winner and runners up from our spring weddings issue. 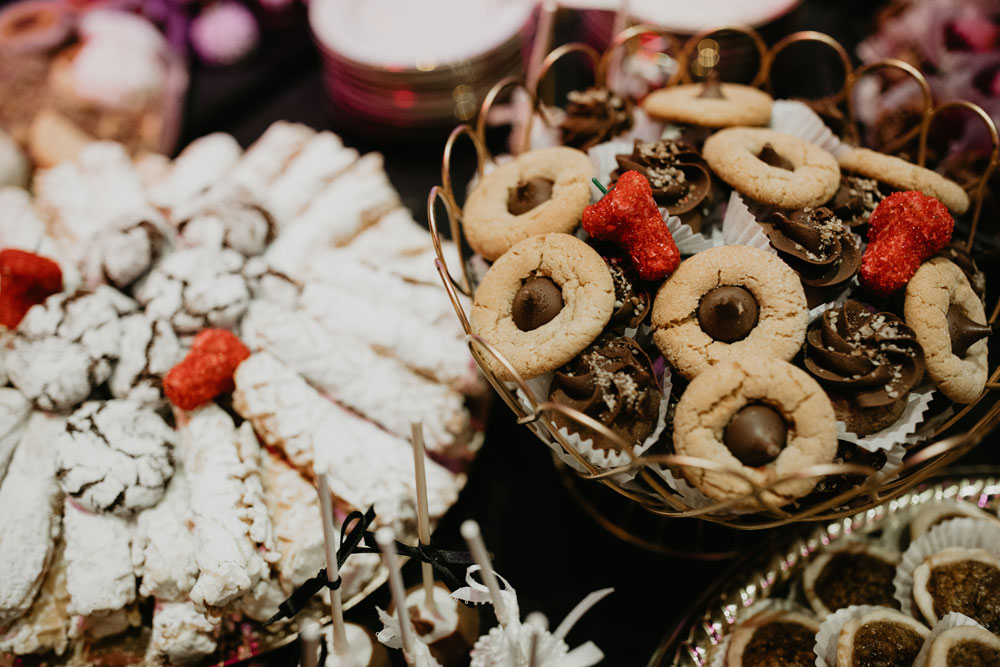 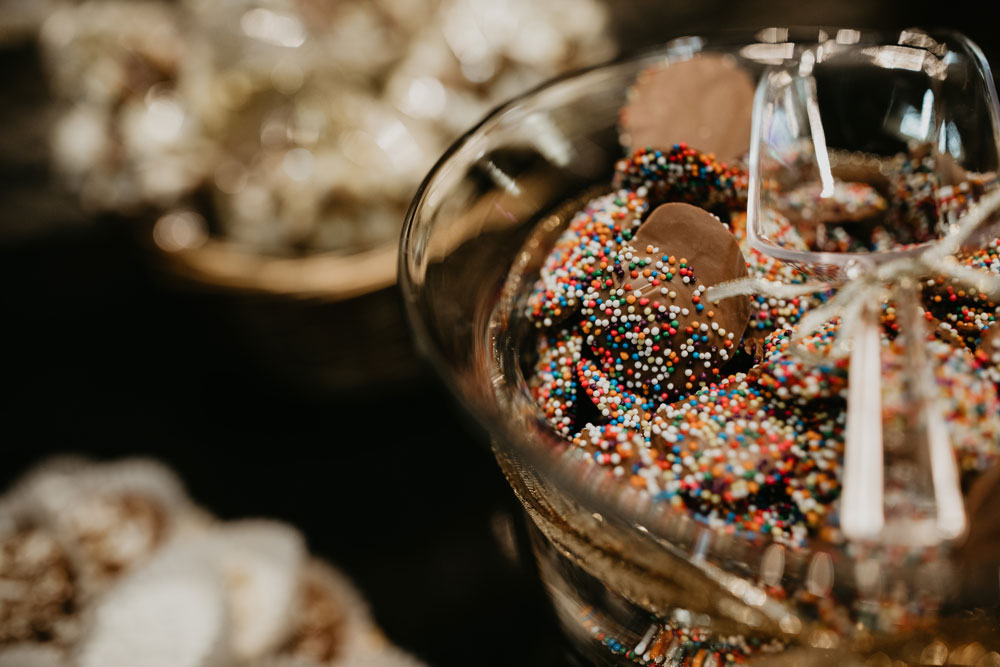 It’s not uncommon for a bride’s mother to make cookies for her daughter’s wedding. It’s less common for her to make 7,200 of them.

As the owner of Debbie’s Deluxe Cookies and Cakes based in Cecil Township, Talia Tonti’s mother, Debbie Tonti, was well-equipped for the task. But she also was thrilled by the prospect.

“She’s been doing this my entire life — making wedding cakes and doing other people’s weddings for as long as I can remember. My husband and I had been together for 14 years, so she was super excited to finally make a table for us and make it the best anyone has ever seen,” says Talia, who married Zac Albright on April 13, 2019 at J. Verno Studios on the South Side. 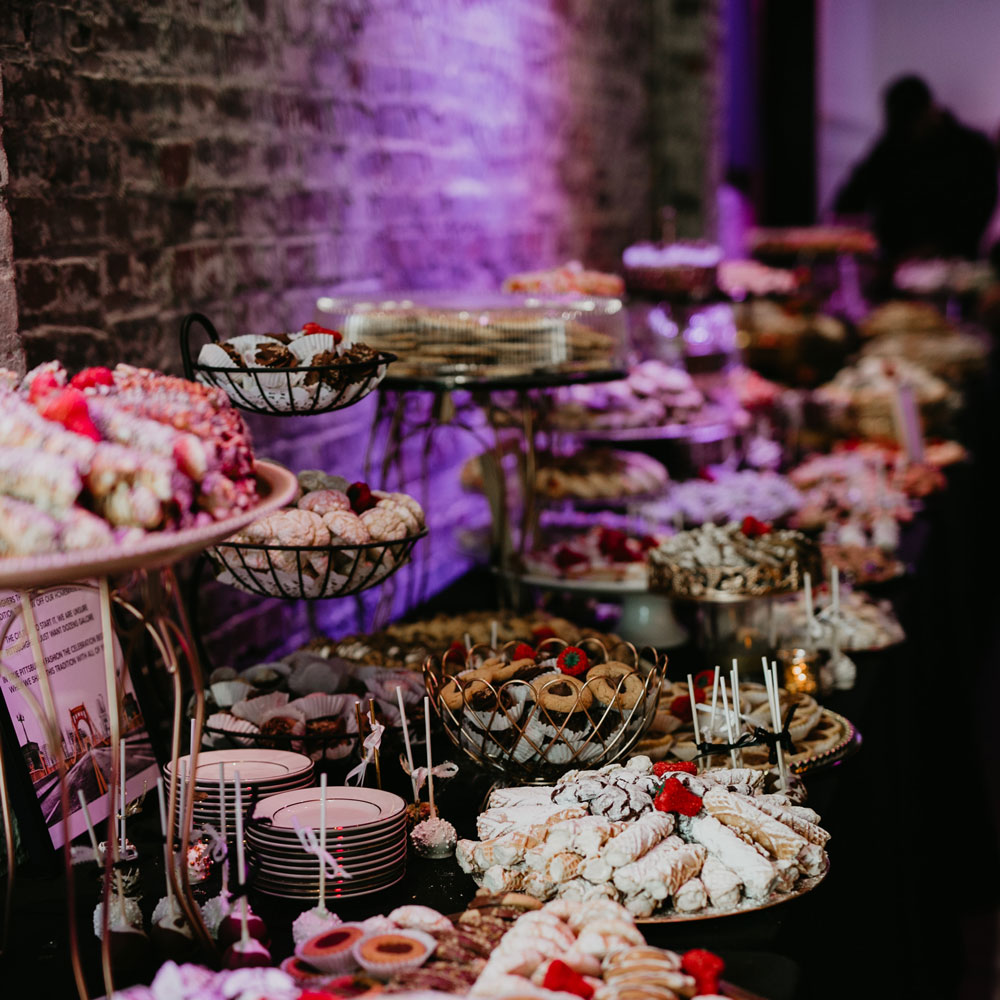 The decision process on what cookies to include on the table was simple.

“Basically, I said, ‘Whatever you want to do,’ and she took on this challenge and she put every single cookie she has ever made in the past on the table,” says Talia.

With 50 different cookie recipes in her repertoire, Debbie covered the table with a variety of options, including some that were gluten-free for Talia and a few of her guests. Talia’s favorite was her mother’s peanut butter balls.

Talia and Zac have lived in Los Angeles for 10 years so many of their guests were from California. For their West Coast guests, Talia and her mother designed a sign detailing the story of the cookie table tradition.

“They don’t have the tradition there, so no one had any idea what it was. When they showed up to the reception and saw it, they thought it was crazy,” says Talia. 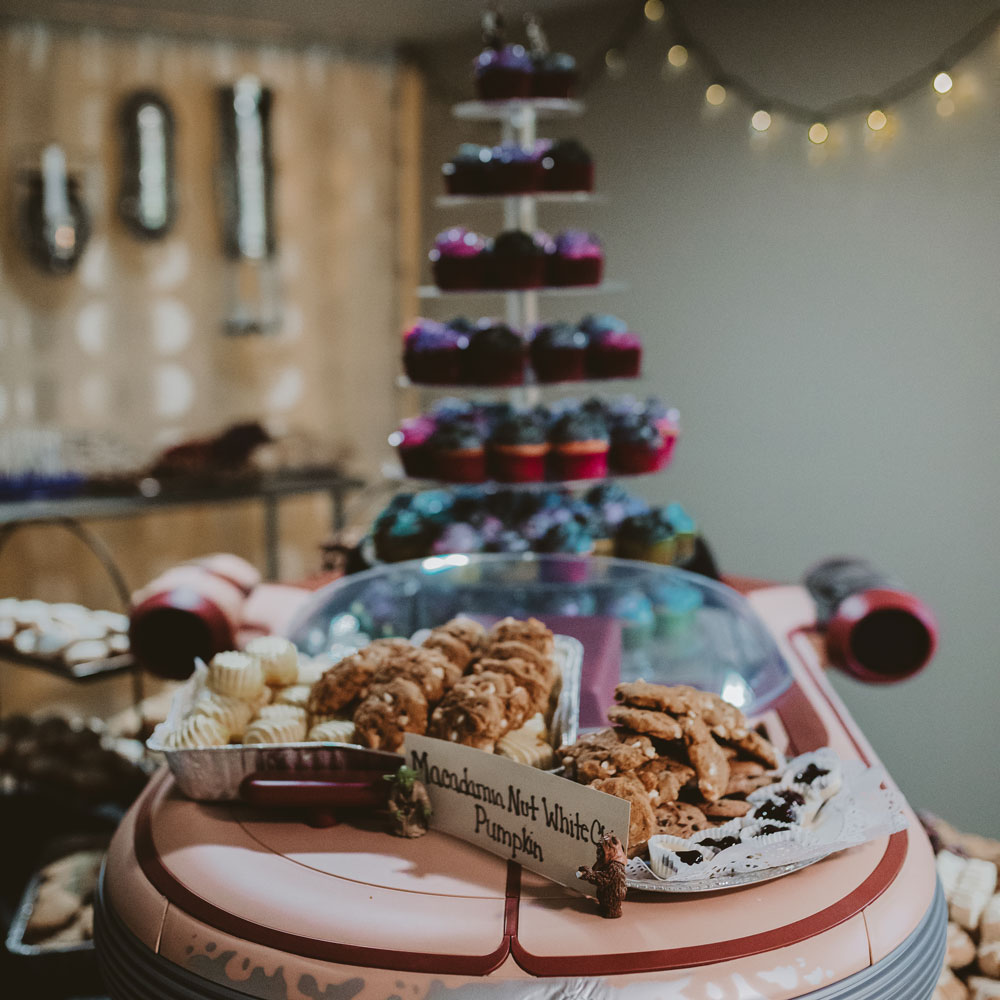 Alexa Fitting and Bryan Heim met through a mutual love for “Star Wars,” so it was only fitting for their cookie room (yes, room) to be modeled after the cantina scene from Episode 4 of the franchise, “A New Hope.” The couple tied the knot on May 4, 2019 in Bradfoodwoods Community Church, and their celebration continued in the backyard of Alexa’s childhood home where their love for the film series could be seen all around.

“We recreated the bar from cantina by scavenging old theater lights and turning them into hanging faux drink dispensers,” says Alexa. “Life-size Han and Chewy cutouts were standing at the bar while Luke Skywalker was over his land speeder.” 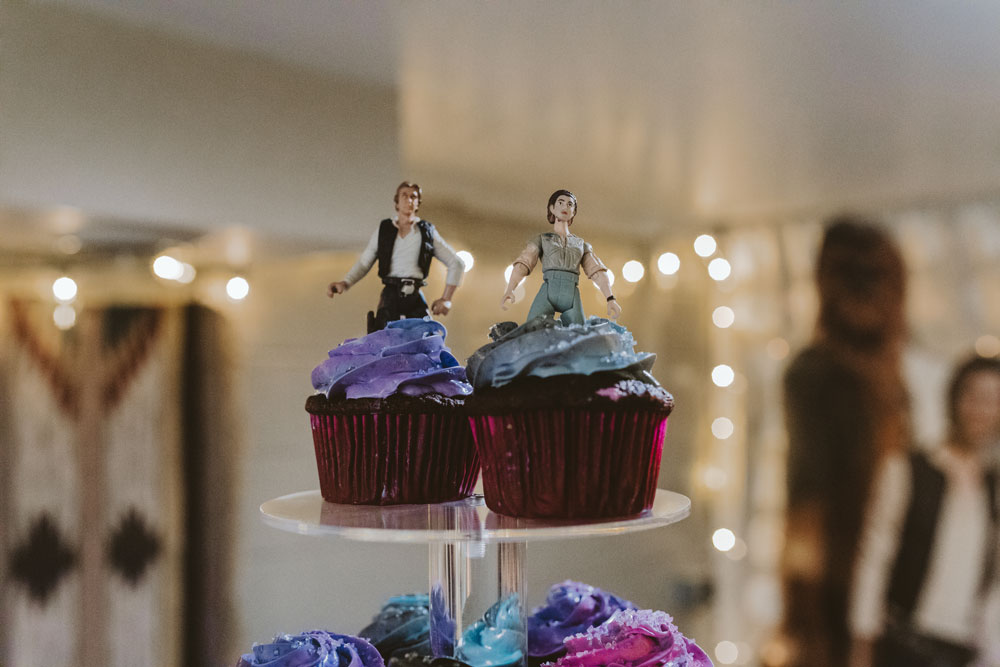 The land speeder was the centerpiece of the room topped with a tower of “galaxy glazed” cupcakes made by Alexa’s sister-in-law and the original 1980’s action figures, Han Solo and Princess Leia, standing above. Surrounding the cupcake tower was an assorted selection of cookies provided by the wedding guests.

“In typical Pittsburgh fashion, we were inundated with a huge variety of cookies, many of which were from recipes passed down for generations,” says Alexa. “One of our favorite contributions was from a non-Pittsburgher guy who had never heard of such a tradition but wanted to participate so he brought Chips Ahoy and set them on a table in the bag… Those were probably the most photographed cookie of the day.” 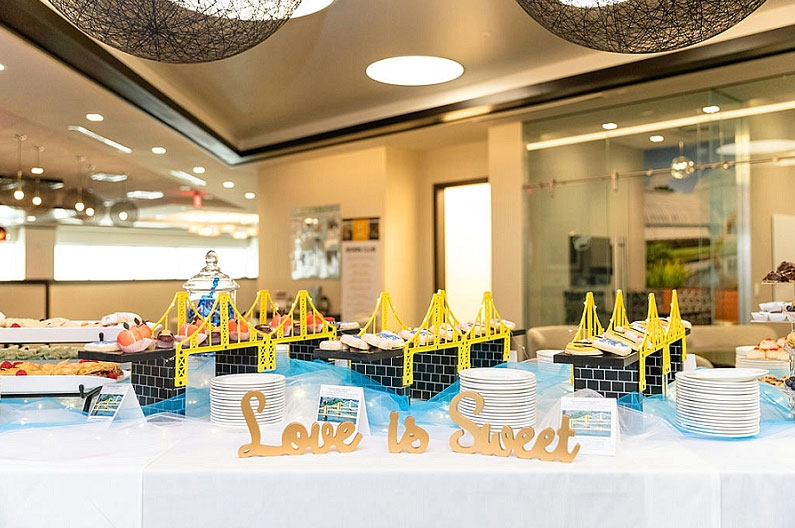 Alyssa Janosko’s mom and dad knew how important the traditional cookie table was to Alyssa and Tyler Filliben after they got married in St. Paul Cathedral in Oakland. It was a go big or go home detail for the newlyweds to share with guests from Miami, where they now live.

Alyssa and Tyler’s bridge, the 6th Street Bridge, was dedicated completely to the newlyweds. On and under the display featured personalized cookies, including a Pittsburgh Pirates cookie for Tyler’s three seasons with the Pirates’ minor league teams, New York-Penn and South Atlantic, a heart-shaped cookie to symbolize Alyssa’s career as a physician assistant in cardiology and a Mr. and Mrs. sugar cookie for the couple’s new titles. 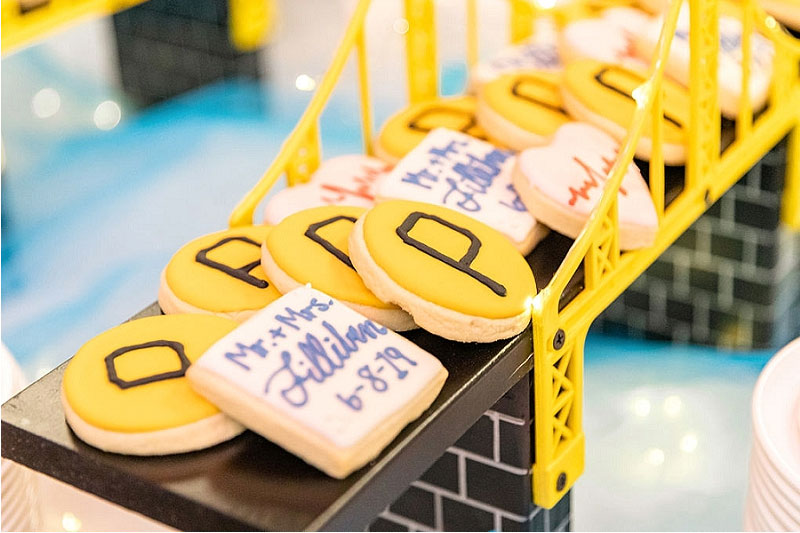 Covering the table were 32 different varieties of 1,600 cookies including lady locks, butterballs, oreo truffles, pecan tassies, thumbprints, Georgia peaches and chocolate chip. While lady locks were the must-have for Alyssa, as they are her mom’s favorite and a Pittsburgh tradition, her favorite of the night ended up being the classic chocolate chip.

“Everyone was in awe of our cookie table, but Tyler and I were the most surprised,” says Alyssa. “When we first saw the cookie table, we were in complete shock… Every time we looked a little bit closer, there was some other little thing on the table that caught our attention. We had been prepping the Miami family about the cookie table tradition so that they’d be ready for it on the wedding day, but this surpassed any expectations,” says Alyssa. 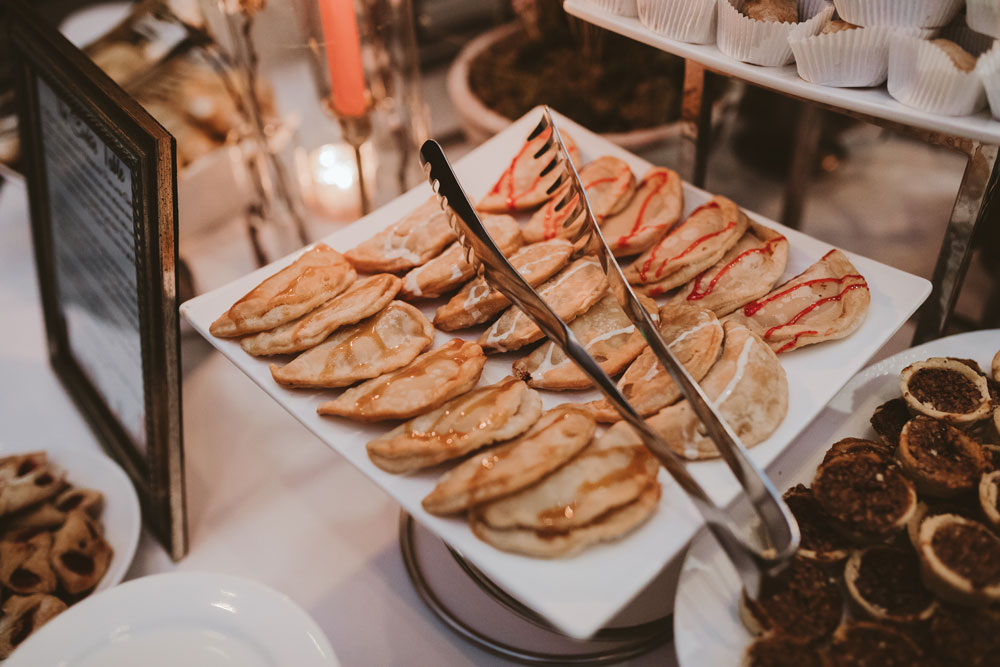 When Courtney Harriger and Jeffrey Grudzinski were planning which cookies were must-haves for their traditional cookie table they made sure to include a personal touch for Jeffrey — sweet pierogi cookies for his Polish background.

The pair said “I do” in Heinz Memorial Chapel on April 13 before heading over to Hotel Monaco for their reception. Both knew their night would not be complete without the traditional cookie table as a central piece in the reception space.

One cookie that stuck out to Courtney as her favorite of the night was the peach flavored cookie that looked like an actual peach fruit. It is a classic made by Courtney’s aunt, one of the many family members and friends that were primarily in charge of the baking for the display.

“We really wanted to bring both sides in… The cookies were really a family thing and we focused on the ones [our aunts] like to make for the Christmas exchanges… We were always baking around the holidays and with the tradition of the cookie table we just asked all of the aunts to make them stemmed off the holidays,” says Courtney. 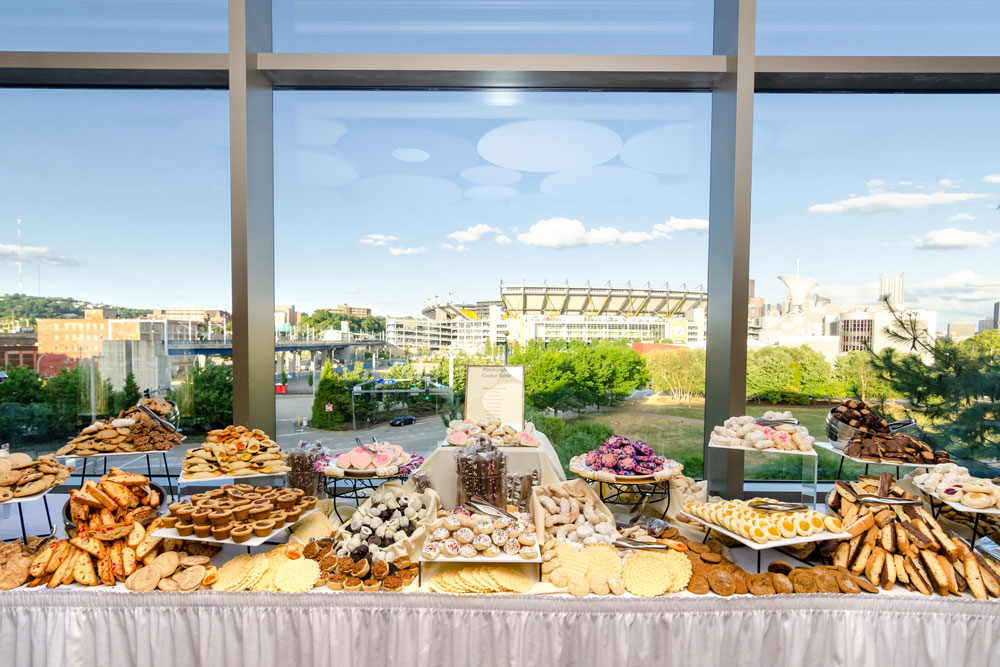 For Elizabeth Smith and Steve Ranella, Rivers Casino created the perfect photo opp for their Pittsburgh cookie table with the Pittsburgh skyline as the backdrop.

“Everyone loved [the table]. Our wedding coordinator at the Rivers Casino, Alissa, set it up to overlook the river, science center and Heinz Field. A truly Pittsburgh cookie table,” says Elizabeth.

Elizabeth and Steve’s mothers, aunts and friends worked to make all of the cookies that spread across the table. Together, they made sure the couple had all of their must-haves — buckeye balls, pizzelles, Italian wedding cookies and Oreo truffles.

The newlywed’s favorites on the table were the Twix cookies, Nutella cups and their favorite cookie from childhood: the classic chocolate chip.

“We love the history of the Pittsburgh cookie table and wanted a variety of cookies our guests could enjoy and take home to enjoy after the reception or in the morning,” says Elizabeth.