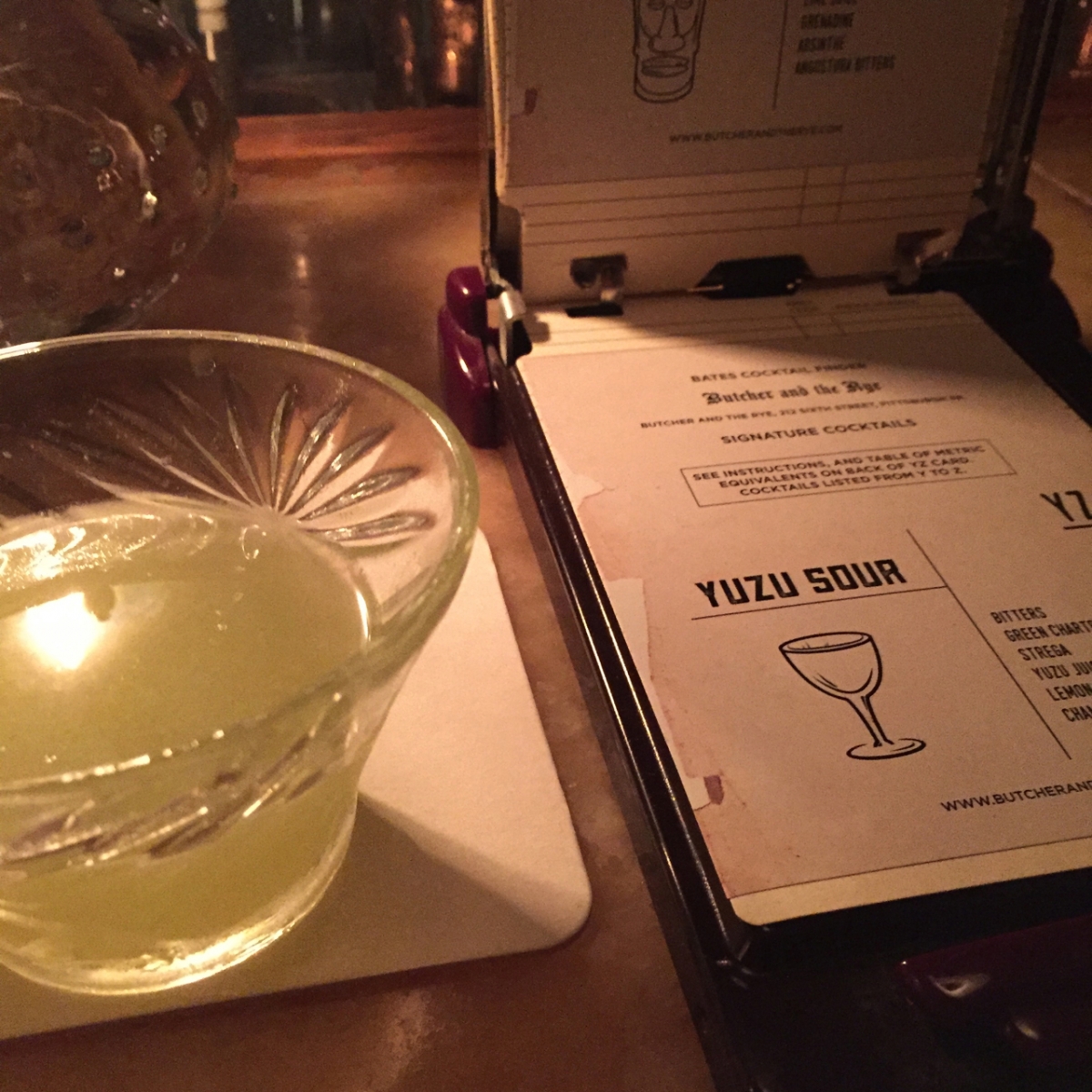 This bar team at Butcher and the Rye this week unveiled the new cocktail menu for the Rye Bar, the top-floor bar in the downtown eatery. Those menus are presented in old Bates address books. Guests are instructed to flip to a letter of their choice, press a button and reveal one classic and one Butcher original cocktail. I sampled a number of them earlier in the week and they were a reaffirmation of what makes this one of the finest bar programs in Pittsburgh.

“Our restaurant group is always working to stay ahead of the trends,” says Spencer Warren, beverage director for the Richard DeShantz Restaurant Group, which also operates Meat & Potatoes, Tako and the forthcoming Pork and Beans.

One example of that is Conqueror’s Ruin, a heady aromatic cocktail featuring the of-the-moment spirit mezcal and a soon-to-be-trending (according to Warren) tilt toward Indian spices such as turmeric and garam masala. The cocktail drinks nicely on its own, but shines brighter when paired with food.

The same goes for Valley Horseman, a bourbon cocktail inspired by the 1980s creations of cocktail legends Dale DeGroff and David Wondrich. It’s a balanced, savory cocktail that manages to incorporate both mustard powder and celery salt in a way that doesn’t offend the palate.

The tiki-inspired H Word (H here stands for Hurricane, the classic Bourbon Street booze classic) is, at $14, the most expensive cocktail on the menu. It’s also one of my favorites; a sweet-tart cocktail featuring freshly shaved ice that’s topped with bitters. 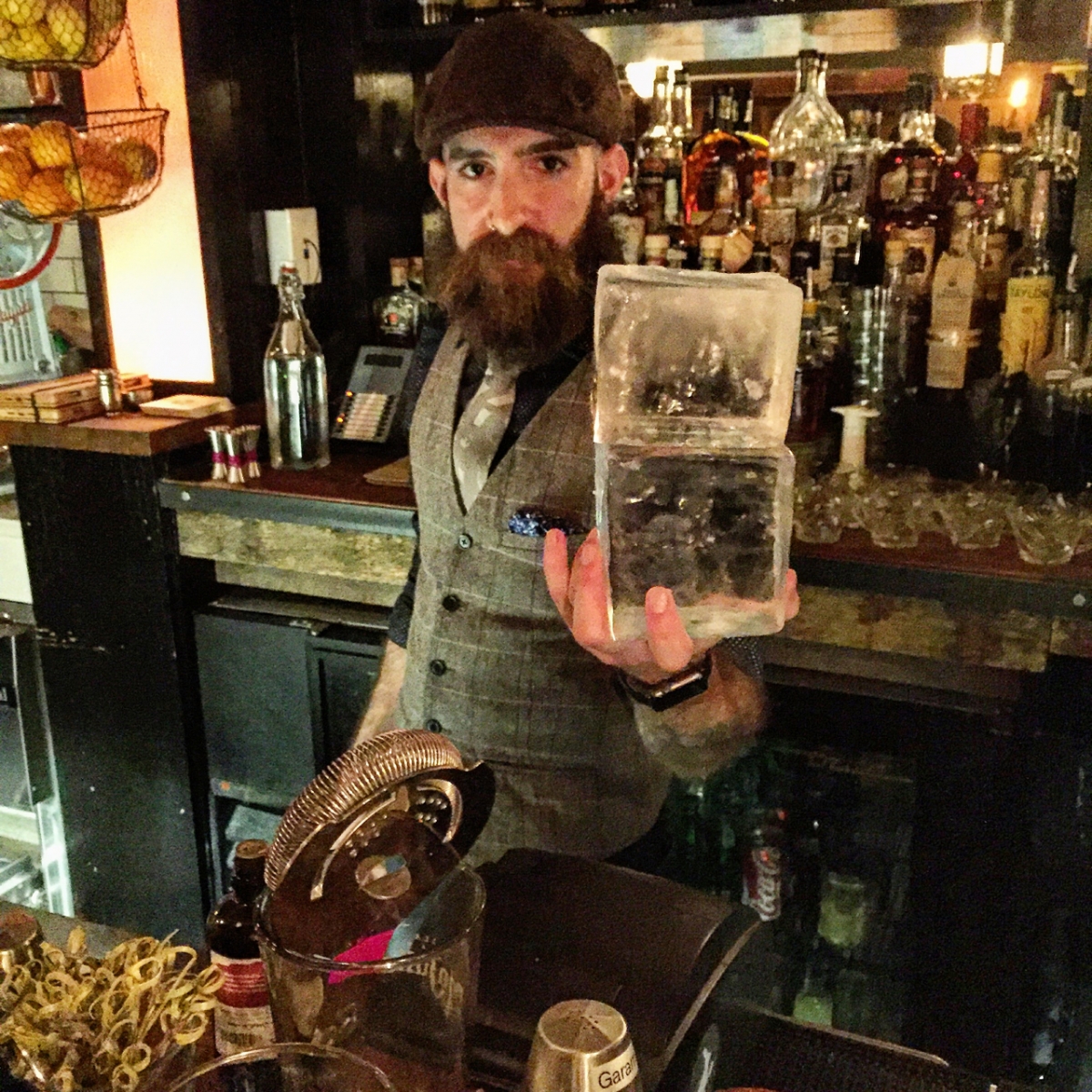 I also rather enjoyed the Yuzu Sour, a play on the terrible Melon Ball (here, green Chartreuse and Strega are significantly more elegant than the classic recipe Midori), and the Scotch-forward Apple Cort, which is stirred with a piece of jewel-like ice courtesy of Giuseppe Capolupo, who runs the bar’s ice program.

There are a total of 38 cocktails on the menu; the Butcher creations are a collaborative effort of the talented bar team. “We have the best bar staff in the city, and we wanted to show them off,” says Butcher bar manager Michael R. Anderson. 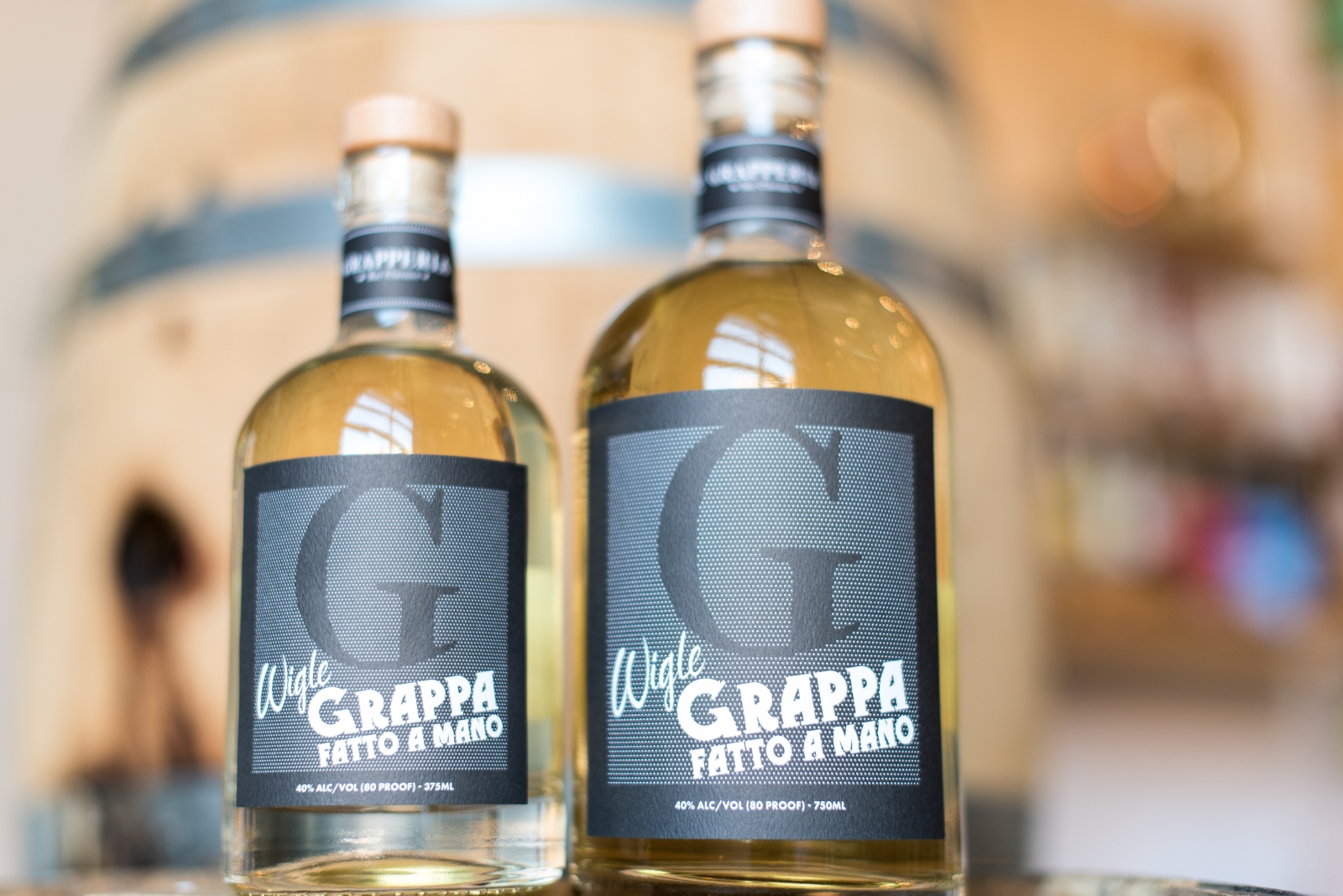 First up is a grappa called Fatto a Mano, which will hit the shelves in limited release on December 10. The product is a collaboration between Wigle, 6 Mile Cellars in Erie and Dominic Branduzzi, the owner of Piccolo Forno and The Grapperia Bar Classio in Lower Lawrenceville. Grappa, for the uninitiated, is a spirit distilled from the fermented liquid of grape skins and stems (pomace) that is the byproduct of wine production. Grappa has an unfair reputation for being miserable to drink, but carefully made grappa can be quite tasty. Happily, Wigle’s product, aged for two months in used barrels to smooth the harsh edges, falls into tasty category.

On December 16, Wigle releases Absint Minded. It’s the distillery’s take on Swiss-style (characterized by a clear color and cleaner flavor than the better-known green Absinthe Verte) absinthe. Wigle’s product is minty, with a hint of orange. No, it won’t make you hallucinate.

Then on December 18, there’s Landlocked Spiced & Oaked, a new permutation of Wigle’s honey spirit, which has previously been released as spiced or oaked, but never both at the same time. The spirit has a heady, intoxicating nose of baking spice and a sweet, burnt sugar flavor that’s balanced by over two years of barrel aging.

Finally, for something fun and a tad outlandish, Santa (Wigle distiller Ben Taylor) will deliver an entire barrel’s worth of booze to your house. He’ll conduct a tasting and then leave you with 80 bottles of whiskey and the 15-gallon barrel in which they were aged. [Price: $5,000]. 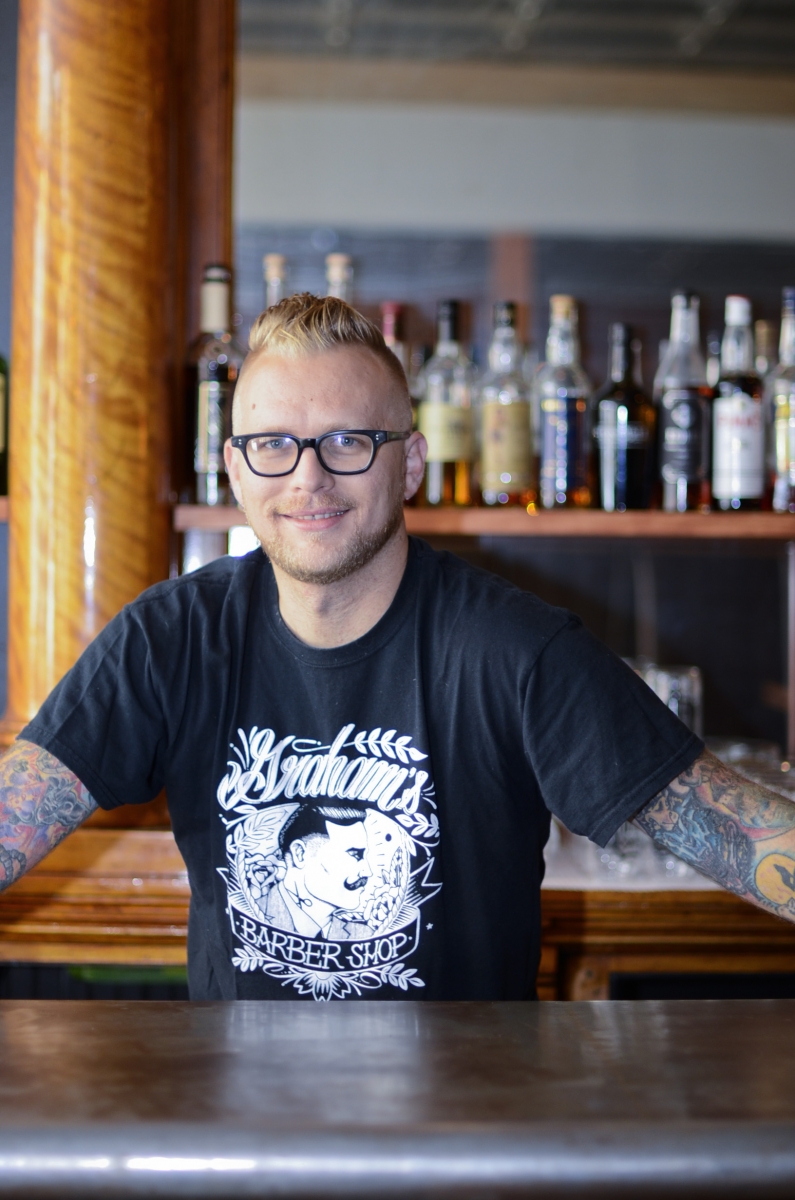 A toast to Station bar manager Chris Matrozza, who soon will be leaving the bartending world to begin a new career as a City of Pittsburgh firefighter. Matrozza has dreamed of working as a firefighter since he was a kid, and now has made his way through the rigorous and highly selective process of qualifying to realize his ambition. Many of us will miss seeing him behind the bar, but I’m thrilled for his success and happy knowing that he’ll be there to help keep us safe.