Artist and forager Sarah Banach's “Foolproof Five” illustration identifies which mushrooms are easy to identify and safe to eat. 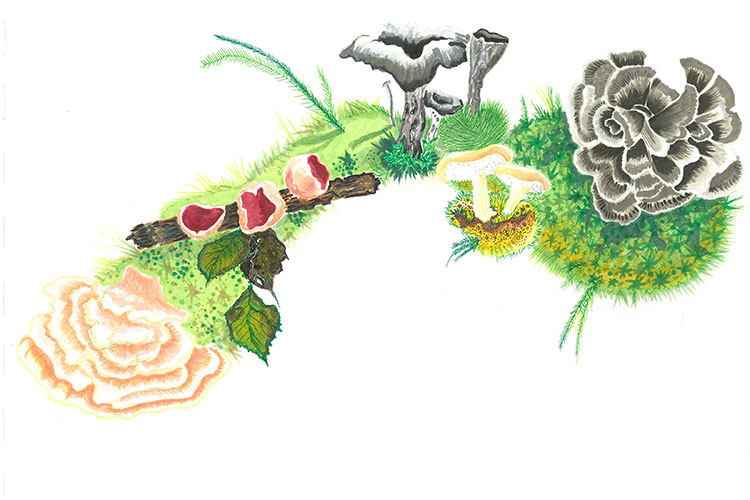 Illustration by Sarah Banach | Caption: chicken of the woods, scarlet cup, black trumpets, hedgehogs and maitake. (from left to right)

Southwestern Pennsylvania is a rich hunting ground for wild mushroom foraging. These tiny culinary gems peak out from the forest floor from early spring through late fall. Before heading out to gather a bounty of maitakes, chicken of the woods or black trumpets, there is a lot to learn about these fungi to keep yourself safe and well fed.

“The fundamental first rule of mushroom foraging is if you aren’t one hundred percent sure about an identification, don’t dare,” says Sarah Banach, a dedicated forager, teacher and artist whose fascination with mushrooms leads her to spend days foraging in the forests in and around Pittsburgh and some of her nights whimsically illustrating her finds.

An small exhibition at the former Lili Cafe in Polish Hill showed mushroom caps and mosses winking with tiny sprites while still inspiring a desire to reach out and feel something that looked life-like. Banach caught the foraging bug after seeing posts on social media of fellow foragers with their hauls of forest finds. “What got me interested was really just jealousy,” says Banach.

She soon joined the Western Pennsylvania Mushroom Club, which meets weekly for education and foraging from March through November. “It’s a great way to learn with experts on a regular basis,” she says.

Two or more identifiers attend every walk that the club ventures out on and make themselves available for questions. Over the last two and a half years, Banach feels that the club has helped her gain a lot of confidence in her own identifications.

“These mushrooms really don’t have ‘evil twins’,” says Banach. “You’d really have to miss some key points to misidentify them.”

‘Evil twins’ or toxic lookalikes are fairly common in mushrooms and sometimes failing to notice a small gill pattern on the cap or a hollow stem can be the difference between collecting an edible mushroom and a poisonous one.

Each of these varieties appear in this area and are pictured from left to right in order of their seasonal appearances.

Chicken of the Woods
Chicken of the woods are almost four season mushrooms in this region. “I have found them sometimes if there’s a warm streak in December and they’ll often pop up in the cooler months of the year,” says Banach.

This species is easy to spot because of it’s almost fluorescent orange color. It grows on dead hardwood trees, often spiraling in a double helix growth pattern on a trunk. The fruiting body (what you see above ground) has a smooth porous bottom and no gills on the underside of it’s cap.

Scarlet Cup (commonly known as scarlet elf cup)
As insinuated by it’s name, the scarlet cup is a bright, blood red. It starts to pop up in April and May and grows on bass wood. “It’s a particular treat if you’re out looking for morels [which comes out in early to mid spring]. You often stumble upon scarlet cups,” says Banach.

The cup is completely smooth. This mushroom has a low flavor profile but add a texture and pop of color to dishes. Banach loves to prepare it in fried rice and ramen.

Black Trumpet
Black trumpets appear once the weather starts to warm and humidity heightens, typically in July and August and have a unique bell shape. This species has “false gills,” which are ripples that appear below the surface but lack texture. It has a sweet and earthy aroma but lack a distinct flavor.

It has teeth on the underside that hang from underneath the cup and features a bright yellow-orange top. This species is found with black trumpets in July and August, often growing on and around the roots beech and oak trees. Sweet tooth mushrooms have a sweeter, earthy flavor when cooked than other species.

​Maitake (Hen of the Woods)
These enormous, avian-looking mushrooms grow at the base of oak and beech trees. The smooth fronds at the edges fan like a hen’s tail. Banach favors them for cooking because of their mild umami flavor.