Le Virtu Returns to Stagioni on May 1

The 49-ingredient soup is a culinary representation of the transition from winter to spring. 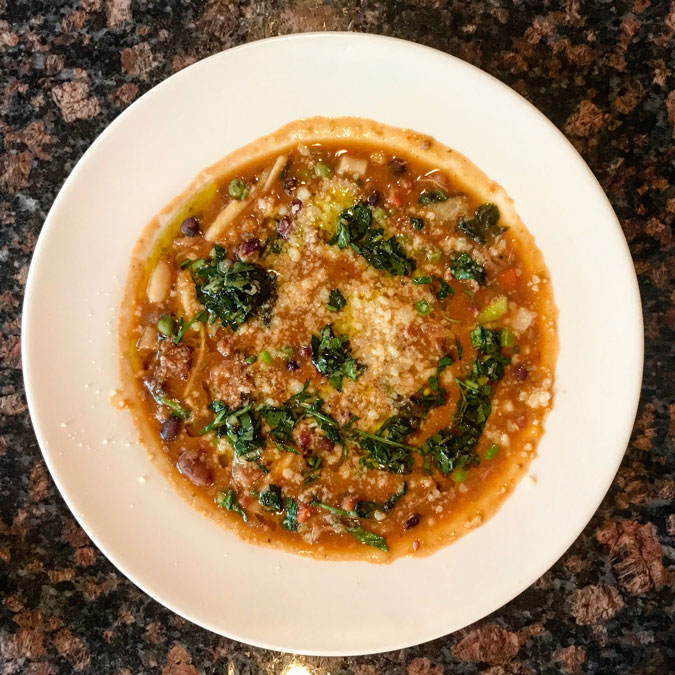 May 1 is a notable day: it’s the age-old spring festival May Day, it’s International Workers’ Day and it’s my birthday. It’s also the traditional day to serve Le Virtu, the 49-ingredient soup from Italy’s Abruzzo region that celebrates the transition from winter into spring.

In Pittsburgh, the place to go for a bowl is Stagioni on the South Side. Executive Chef/Co-Owner Stephen Felder first prepared it five years ago, entering it the South Side soup contest. “We thought it was so unique and had an interesting story behind it, and it had a family connection,” says Stagioni co-owner Cara DelSignore, whose family is from Abruzzo.

Although Le Virtu didn’t win the contest that year, it won hearts and minds, and, DelSignore says, “Steven thought the process was so interesting that we decided to put it on the menu.”

Felder spends about five days preparing the soup, which traditionally is cooked in seven pots. It’s a complicated process that involves making rich chicken stock as well as a broth from various pig parts including feet and ears. There’s a pot of pulses such as beans, chickpeas, peas and lentils and another with vegetables such as endive, leek, celery, carrots, fennel and chard; Felder adds a western Pa. touch with the inclusion of ramps. There are meaty bites of meatballs, bacon and ham, herbs such as sage, thyme, borage, parsley and basil, mushrooms and various shapes of pasta, both dried and fresh. They all end up in a single serving vessel after Felder mixes the multiple pots in a prescribed order.

The result is a rich and complex bowl of soup that feels indulgent and stick-to-your-ribs, brightened by the promise of springtime. It’s my favorite birthday ritual, and it should become part of your spring transition, too. Just don’t wait too long as Felder prepares a limited amount of the soup — it’ll hit the menu on Tuesday and likely will be gone by Thursday or Friday.