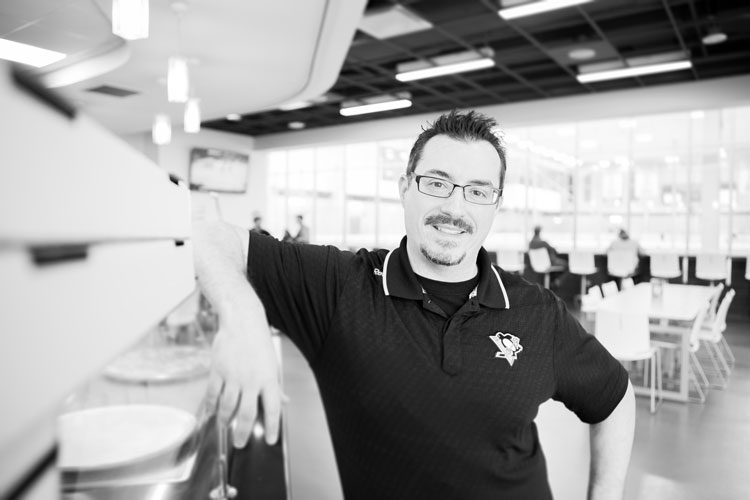 Mark Collins first was drawn to restaurant kitchens when was a kid. “Everyone has that story of how their mom would cook all the time. My parents were the opposite. They would eat out all the time. That’s what sparked my interest,” he says, adding, “I love the atmosphere, and I love trying new things all the time.”

Now, the Charleroi High School graduate is Director of Dining at the UPMC Lemieux Sports Complex in Cranberry Township. His portfolio includes overseeing — in conjunction with the facility’s executive chef, Geoff Straub — the feeding requirements of the Stanley Cup champion Pittsburgh Penguins. He also ensures that visitors to the complex, who can number more than 1,000 on a busy weekend, have something tasty yet nutritious to eat at the complex cafe, The Training Table.

His position is part of a diverse culinary career that started in chain restaurants such as Cracker Barrel, Denny’s and McDonald’s; Collins says that by the time he was 18, he was managing eight branches of the hamburger chain.

“What you learn from that is structure. It’s something you wouldn’t find at many small restaurants. To take that and learn from it was a big deal,” he says.

Of course, it also helps to learn a thing or two about cooking if you want to be a chef. Collins graduated from the International Culinary Academy (later, Le Cordon Bleu) in 1998, working as a cater-waiter for Bob Sendall’s All in Good Taste Productions while he was in school. “I still look back and say that’s some of the most amazing food I’ve ever had in my life. To do that stuff off-site and not in the comforts of your own kitchen was impressive,” Collins says. 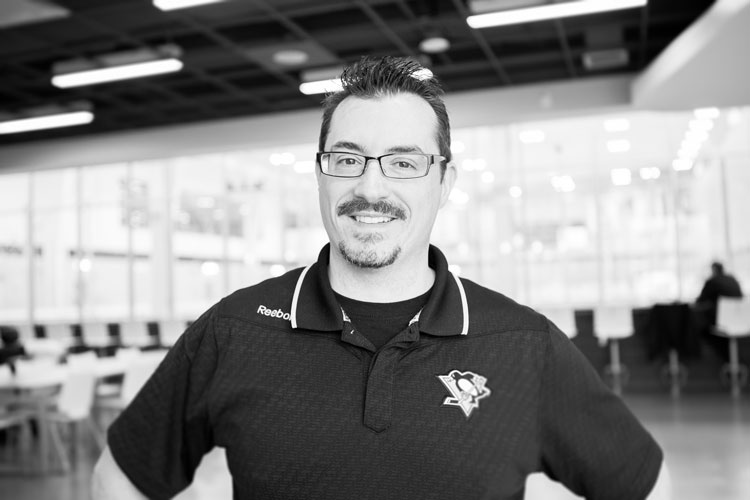 After he graduated, Collins worked as a line cook for local culinary legend Toni Pais at Baum Vivant. In 2000, he landed a job at Le Pommier, a much-lauded French restaurant on the South Side, and became the restaurant’s executive chef in 2004.

An interest in family superseded an interest in fine dining, and when Le Pommier closed in 2010, Collins decided to get a job in corporate food service instead of pursuing another restaurant gig. “I wanted a position where I could utilize my talents, make a good living and be at home with my kids,” he says.

And although he sometimes misses the flexibility to follow a whim and create a dish on the fly as well as having direct relationships with small farms, Collins says he is pretty stoked to spend his time feeding the Penguins (and others).

“This is a one-of-a-kind facility,” he says.

Directions: Slice the onion in half lengthwise against the grain. Sauté the onions with 2 tablespoons of oil over medium heat for 20-30 minutes. Stir the onions occasionally. When the sides of the pan look dry and brown, hit it with just a bit of water to loosen the fond  (the brown bits stuck to the bottom)from the pan. Continue until the onions are medium-brown color. Sauté the shallots with 1 tablespoon of oil in another pan until soft and translucent, about 5-7 minutes. Add the leeks and continue to cook for another 5 minutes. Allow everything to cool down to room temp. Preheat oven to 350F.

For the crust, combine the flour, egg and water in a food processor and blend until it comes together. While the machine is running, add the butter pieces bit by bit until a ball forms. Remove from the machine and gently knead until everything comes together. Wrap it up and let it rest for at least 20 minutes. While the dough is resting, whip the 4 eggs until completely smooth (helps to ensure a fluffy texture for the custard) and add the heavy cream, gruyere, onion mix. Season with the salt, pepper and nutmeg.

Roll out dough until it is about 1 inch larger in diameter than the pan. Carefully transfer the dough to the pan. Dock the dough with a fork a few times. Chill in the fridge for about 10 minutes, and then bake for about 5-7 minutes. Pour in the filling, and continue to bake for about 30 minutes. Reduce the temp to 300F and bake for another 15 more minutes.