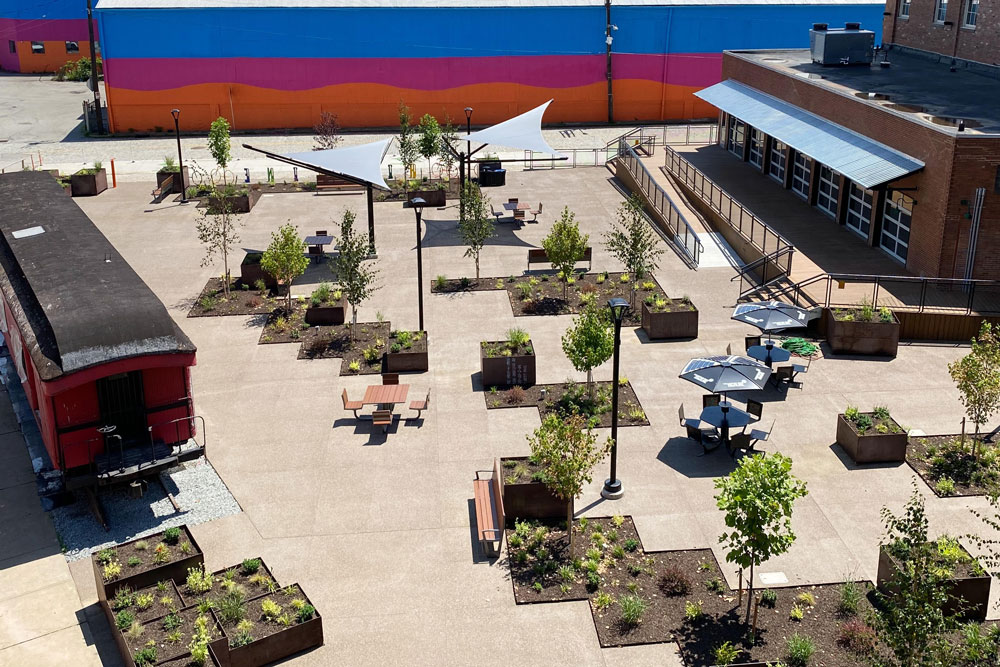 A new autumn beer garden recently opened in Pittsburgh. Lagerlands Socially Distant Beer Garden, a collaboration between Hop Culture Magazine, Cinderlands Beer Co. and De Fer Coffee and Tea, kicked off Sept. 11 at the new The Highline on the South Side. The family- and dog-friendly outdoor venue features a mix of beer, cocktails, coffee, food and entertainment.

Cinderlands products anchor the beer offerings, but event organizer and Hop Culture Magazine founder Kenny Gould says that he’s also tapping into the deep network of brewers featured in his beer and lifestyle magazine. “I was able to call up some cool beer folk throughout the country and have them send in some product you can’t typically find in Pittsburgh,” he says.

Asheville’s Dssolver Brewery, for example, is the opening weekend featured brewery. De Fer rounds out the beverage menu with a selection of cocktails and coffee.

As per current Pennsylvania law, anyone purchasing alcohol must also buy food. Burgh’ers Brewing Company’s menu includes hamburgers, grilled cheese sandwiches and Impossible burgers. On select evenings, movies will be projected on a 20-foot screen, and there will be live jazz music on other evenings.

Gould says he, Cinderlands co-owner Jamie Warren and head brewer Paul Schneider mused last summer about organizing a beer garden by one of Pittsburgh’s rivers. “Our spaces by the rivers aren’t taken advantage of in any significant way. That’s changing, but there is still a long way to go,” Gould says.

Hop Culture typically throws beer festivals throughout the country, including big outdoor fests during the summer. However, Gould says, “A festival doesn’t make much sense at this time. The energy around a festival is pretty frenetic. That’s not a safe or responsible thing to do right now.”

So rather than throw a big party, he worked to set up a space that reflects the physically distant measures necessary to protect public health in social spaces. To that end, there is a limit of 100 people in the garden at any time and reservations are required for two-hour seating blocks; there is a $5 per person reservation fee that can be applied to the final check. Lagerlands runs Fridays, Saturdays and Sundays, rain or shine, through Nov. 1.

“We’ll get back to live events when it’s safe to throw them. For now, we want to offer a relaxed, fun space where you can enjoy the fall with your friends and family in a safe way,” Gould says.