Kingfly Spirits Will Open Next Month in the Strip District

Blake Ragghianti plans to elevate the art of distilling limoncello, grappa and other Italian spirits. 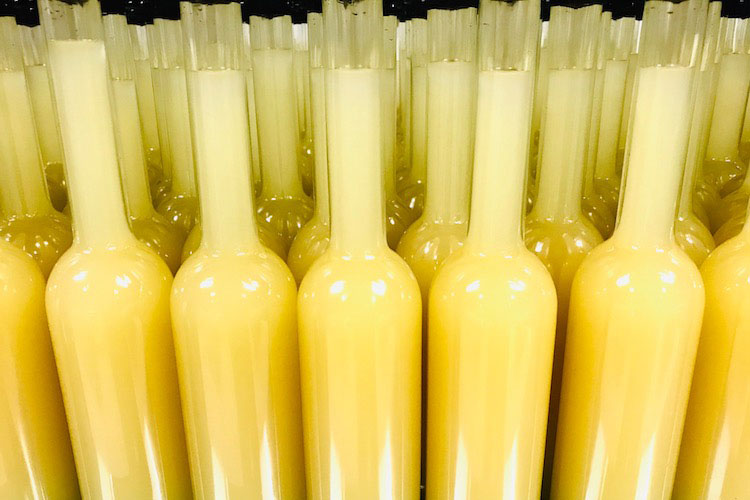 For Blake Ragghianti, distilling is a tether to family history.

The former Carnegie Mellon University music graduate spent time writing music, running a music nonprofit and captaining yachts before he felt himself called back to Pittsburgh and family. After years of being away, Ragghanti wanted to establish a connection to his family history so he started to explore his Italian heritage. He reconnected with extended family in Luca, Italy, bringing home their recipe for limoncello. From there, he developed interests in grappa, amari and other spirits and began to distill them at home. He wanted to share this part of the past in a way that combined history and craftsmanship.

Now, after years of perfecting his recipes, he and his business partner Mark Willson are a month away from opening Kingfly Spirits in the Strip District.

Ragghianti first started distilling 10 years ago on an old pressure cooker his father had built when he was in the army to make raisin brandy. While it’s possible to find well-made imported limoncello or grappa, these spirits have suffered from a bad reputation as being too rough or too sweet, often because of home distillation methods or a lack of attention from the distiller. Ragghianti wanted to make refined spirits that let their core ingredients shine. “Grappa has a bad rap. Probably from the '50s after the war when a lot of Italian Americans were making it in their garages. To be frank, it was rot gut,” says Ragghianti.

For his spirits, Ragghianti imports ingredients such as lemons from Sorrento and rose petals and herbs from California. To make his limoncello, he combines a variety of botanicals to add subtly to the lemon flavors. “Making alcohol is a simple science. Anyone can make it. But to transform that into something that has different notes into it, that fascinates me,” he says.

Ragghianti’s limoncello is delicately floral, with a mellow sweetness that banishes memories of saccharine limoncellos that are more similar to candy than liqueur. Subtle herbaceous notes add depth to the profile and makes the idea of having more than one appealing.

When Ragghianti started looking for investors to help him open a distillery, Wlillson, his friend and fellow sailor, took an interest in the project. Kingfly’s space is a former barn and lumber mill built in around 1900. Willson and Ragghianti have worked to retain the feeling of the original building, with warm lighting, comfortable furniture and high ceilings that make it easy to imagine a hay loft above you. “We really wanted to honor the history of the building,” says Ragghianti.

The still sits in the center of the room, and Ragghianti is passionate about giving guests the full experience of his spirits from still to glass. He plans to invite guests to assist in distilling tasks if they have an interest.

Willson and Ragghianti are set to open Kingfly to the public Feb. 2. Ragghianti plans to start with limoncello, silver rum and spiced rum, and grow its portfolio from there. “I felt strongly about starting with limoncello because it’s what started me on this path,” he says.