The Sakura Project board members, volunteers and architects have been busy planting hundreds of trees since 2009. 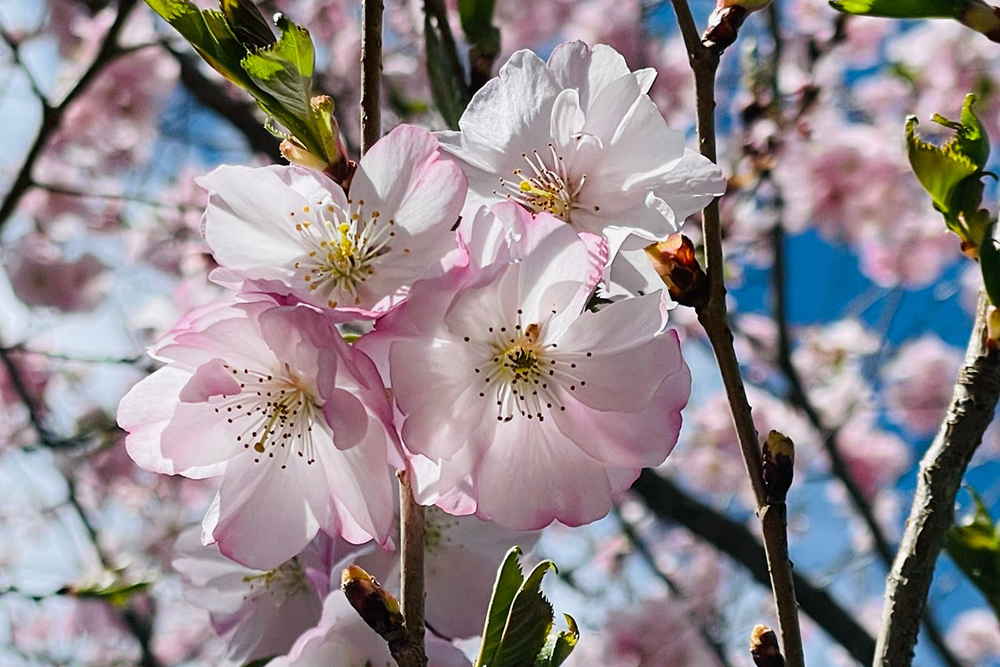 The nonprofit has been creating groves of Japanese cherry trees around Marshall Lake in the park since 2009, all with the hope that the region would one day have mature, blossoming trees like those that delight all ages in Japan. That time has come, according to Sakura Project members Fumio Yasuzawa and Carol Tenny.

They were joined recently at the Harmony Shelter by Kary Arimoto and Rick Mercer, the landscape architects who have been working on the project. They say North Park was the natural choice for a project like this.

“When we came here, we all stood at the top of that slope and we looked down toward the boat house and the lake and we couldn’t imagine a better place,” Arimoto says.

There are almost two dozen groves of a couple hundred trees, all peppered around the 65-acre Marshall Lake right off of Pearce Mill Road. While the trees may all look similar to the untrained eye, there are various types throughout the groves, including Accolade cherry, weeping cherry, Yoshino cherry, Akebono cherry and Kwanzan cherry.

There are also some non-cherry trees such as black gum, eastern white pine and American hornbeams. As of spring 2022, 413 trees have been planted, a little more than half of which are sakura trees.

Yasuzawa came to the U.S. in 1975, and in the early aughts, the Sakura Project was his idea. It was something that he says started off as a dream and, thanks to the help of volunteers over the years, became a reality. Even when the COVID-19 pandemic curtailed the efforts of the once-ample volunteers, the board — about six people — have been maintaining the trees mostly on their own for the last few years.

For them, it’s a labor of love.

“It’s an outreach to all kinds of communities. I think a thing that’s also really valuable is that it’s an expression of international friendship,” said Tenny, who grew up in Japan. “That’s something that’s really to be treasured.”

Arimoto and Mercer were at Chatham University in the landscape architecture program as second careerists when they got involved, along with their third partner Ron Block. Their architecture firm, Arimoto+Mercer, has mostly focused on residential work, as well as a project in Afghanistan that got tabled after a bombing in Kabul. But the work they’ve done in North Park boasts both longevity and size.

“This has been our longest lived and largest project,” Mercer says. “It’s nice to see it appreciated.”

Sakura Project members met some resistance at first because park officials were used to the landscape being mostly grass and thus easy to mow and maintain. Sakura trees, on the other hand, need to be planted and mulched, and require that fences be erected and repaired to protect them from wildlife. (Mercer says deer and beavers are the organization’s primary foes.) But now, mostly everyone is on board.

“The park’s people have also said that lots of volunteer groups show up and they do their thing for a couple years and they go away. The Sakura Project group has been consistent, stayed involved, kept their promises,” Mercer says.

The Sakura Project’s promises come in the form of healthy trees. Most of the trees you see around the lake were indeed planted by Sakura Project volunteers in the last decade or so, and many of them will get bigger and bloom brighter as they mature.

But the trees aren’t just there to look pretty; many of them are imbued with deep meaning.

“That lone oak tree on the slope, that was the memorial tree for Fukushima,” Arimoto says, gesturing across the way, beyond a children’s playground, to a sturdy oak standing on a hill.

There are other groves representing other memorials, including one for the victims of the 2018 mass shooting at Tree of Life in Squirrel Hill, and even other places like Saitama, Pittsburgh’s sister city in Japan.

“There’s a lot of memories tied up in these,” Arimoto adds. “We have a nephew who was only 22 when he passed away, so that pine tree across the lake is Paul’s. He had leukemia. [The tree] is growing so strong.”

But individual trees can sometimes die — or be lunch for hungry wildlife. Other factors, such as drought or excessive rain, can cause the trees to wither, too. By planting the trees in groves, the organization is ensuring that the important things some trees represent are never truly lost.

“Each tree has its memory within the grove, so it doesn’t feel like your tree died,” she says. “It’s just like people. You have a memory within a group of people.”

The sakura trees usually bloom around the end of April — a couple weeks after the famous cherry blossoms dazzle Washington, D.C. Tenny says that because they have so many different varieties of trees, the peak blooming season is spread out and can sometimes last up to a month.

“Okame is first, accolade is second, then yoshino, then weeping cherries … and Kwanzan are the last,” Yasuzawa adds. The earliest blooms began just over a week ago, so there’s still time to get out and see them in action.

The Kwanzan trees were a bit of a happy accident — the Sakura Project ordered yoshino cherries but when they arrived, they were actually Kwanzan — a heavy tree that they worried might not be appropriate for the park.

“But then, when they bloom last, it’s like fireworks,” Arimoto says.

Having multiple types of trees means that Pittsburghers can experience a wide range of various blooms, unlike in D.C. where most of the sakura trees are yoshino cherries.

Members of the Sakura Project often meet in the park to educate guests about the cherry blossom blooming season. The general response, the group says, has been positive.

Families gather in intentional clearings within each grove to eat lunch and spend time together — all in the spirit of a Japanese tradition called hanami, which literally translates to “flower viewing.” This tradition of celebrating the beautiful but ephemeral sakura blossoms dates back to ancient Japan, and many people who gather to look at and photograph the cherry blossom trees in North Park may be celebrating it without even realizing it.

“We said we’d know things were a success the first time we saw people with their blanket and their bento box, so we made the groves specifically so you can have a space in the middle,” Arimoto says. “It looks kind of random, but it’s actually not as random as it looks.”

For Tenny, the grove marks an important connection between cultures — something that effortlessly spans the more than 6,000 miles between Pittsburgh and Japan.

“In Japan as a child, I remember going out and looking at the cherries and if you look up, it’s like the whole world,” she says. “That’s the feeling we want to get with the groves.”