The plant-based meat alternative from Impossible Foods is a significant improvement on its initial offering. 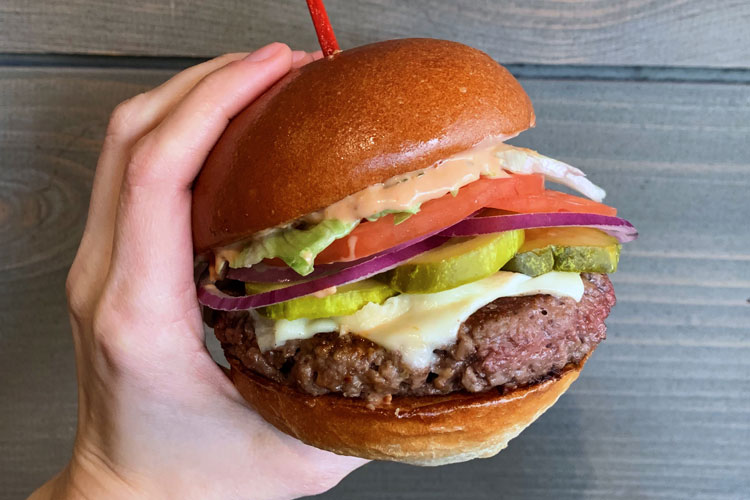 The Impossible Burger made a big splash with its 2016 debut at David Chang’s Momofuku Nishi in New York. A year later, the plant-based meat first appeared in Pittsburgh at the locally owned hamburger chain Burgatory; its availability has since expanded to more than 30 restaurants throughout the region.

Version 1.0 of Impossible Foods’ meat alternative proved to be a big hit both nationally and locally. Since its introduction, Burgatory has sold nearly 45,000 Impossible Burgers; Burgh’ers Brewing, which has locations in Lawrenceville and Harmony, has sold more than 6,000. However, the initial version of the Impossible Burger wasn’t without its flaws.

To begin with, 1.0 was significantly higher in saturated fat (a standard 4 oz. serving packed in 70 percent of what we’re supposed to have in a day) and sodium than a similar serving of 80/20 ground beef. On top of that, the texture of the vegan patty was grainier and more crumbly than a hamburger fashioned from ground beef from a cow. Most importantly, the flavor, while beefy, didn’t quite compare to that of a dreamy, beef-based burger. When I wrote about the Impossible Burger’s Pittsburgh introduction, I said, “All-in-all, you probably could pass this off as a beef burger if you didn’t tell someone it was lab-created ‘meat,’ but, if they were paying attention, they likely would sense that something was slightly amiss.”

Released in January and now available at all Burgatory locations (and in the next few weeks everywhere the first version was sold, as well as at area grocery stores), the plant-based alternative moves significantly closer to serving as a worthy pastured-meat replacement — or at least a semi-frequent substitute.

Kliman says that the Impossible Foods team went through approximately 850 iterations of the new formulation before landing on the current version, a process that includes breaking things down to the molecular level to examine proteins, fats, amino acids and and other meat components, and to figure out how to make them function the same way with plant-based ingredients. “This change came together because we understand from a food science perspective how the ingredients function together and work as a system. When you change them together you can get the most out of ingredients,” she says.

Some of the changes include using sunflower oil in addition to the coconut oil found in 1.0, a modification that helps reduce saturated fat by 40 percent; the new formulation also has 30 percent less sodium than the first iteration. Soy protein, more bioaccessible than wheat protein, is used; the change makes for better texture and a gluten-free patty. And methylcellulose, a plant-based binder, further improves texture both with moisture retention and mouthfeel.

“You can tell a huge difference in the product. It has a more of what you would consider a typical protein texture. It doesn't fall apart as much,” says Burgatory Executive Chef Vince Piconi.

It’s a significant improvement over the first Impossible Burger. I tried one at Burgatory and was especially impressed with the texture, which ate more like beef than any plant-based meat I’ve had. The uncanny divide in flavor is still there, but it’s not nearly as noticeable or lingering as it was in 1.0; dressed with American cheese, Iceberg lettuce, dill pickles, red onion and garlic mayo, it tasted better than a low-grade fast food burger. Still, I’d be curious to see it mixed with beef — say 75 percent Impossible and 25 percent cow — just to see how that tastes.

This is first of what Kliman says will be ongoing improvements to the Impossible Burger, as well as the cusp of more plant-based meats to come from Impossible Foods and other companies. “It’s extremely exciting and motivating. You hear so many bad things in the news about what’s going on in the world, and to contribute to what might be an entire paradigm shift in the way we interact with the Earth is an amazing opportunity,” she says.

That’s a thought echoed by Piconi. “There are so many more possibilities with what we can do with this,” he says.

Welcome, meat eaters, to what might be the dawn of our plant-based future.