The beam is one of 21 that form the foundation of the new Fern Hollow Bridge. 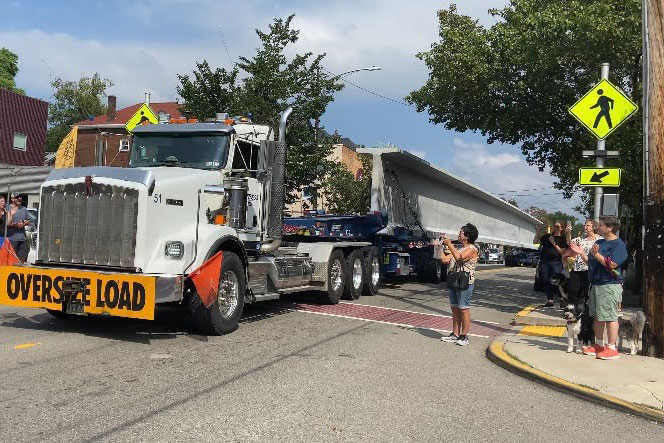 PHOTOS AND VIDEO BY VIRGINIA LINN

The first two of the last seven beams for the reconstruction of the Fern Hollow Bridge arrived this morning in a dramatic back-up truck delivery on South Braddock Avenue through Regent Square, which drew scores of people along the route to cheer on the construction workers.

The first massive superload truck reached the Regent Square business district at about 10:40 a.m. and both deliveries were through before 11. They drove to the intersection of Forbes Avenue, where a mammoth crane is putting them into place to complete the foundation of the span. Fourteen beams were placed earlier on the Squirrel Hill side of the bridge.

The delivery trucks have to drive backward up South Braddock because using the inbound exit ramp at Edgewood/Swissvale would involve too sharp a right turn for a truck carrying such massive cargo. It backed up the straighter ramp that carries traffic from South Braddock to the inbound 1-376 entrance. 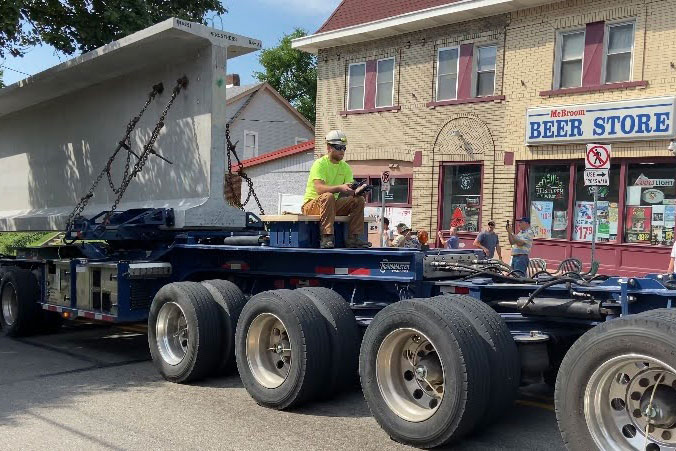 According to the Post-Gazette, the beams are carried by the truck cab on one end and a trailer attached at the far end, which has its own engine and steering mechanism. The truck driver can steer the trailer remotely from the cab. There’s also someone on the street speaking with the driver via radio to ensure things go to plan.

Two beams a day are expected to be delivered Friday, and Monday, with the remaining one arriving on Tuesday, Aug. 16 — bringing the total to 21 beams for the new bridge, according to a PennDOT release. 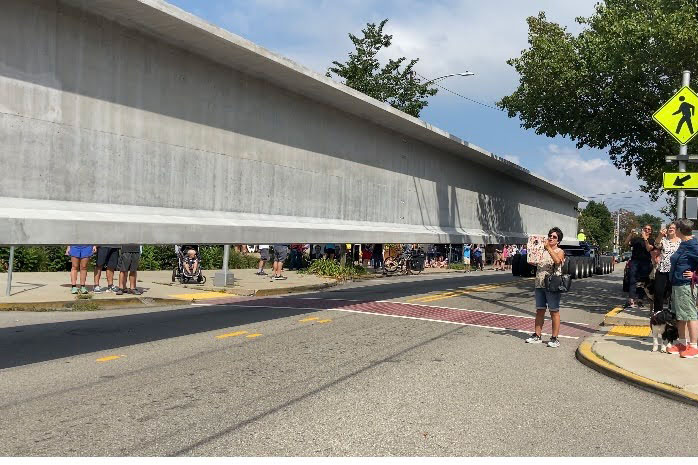 The prestressed concrete beams are approximately 150 feet long, 8 feet high and 4 feet wide. Each beam weighs a whopping 100 tons. If you stood a beam on its end, it would be roughly as tall as a 14-16 story building.

Like everything these days, bridges don’t come cheap; $25.3 million in federal funds were set aside for the project just days after it collapsed on Jan. 28. This funding, from the Bipartisan Infrastructure Law, will pay for the new bridge and won’t take away any funding from other projects. 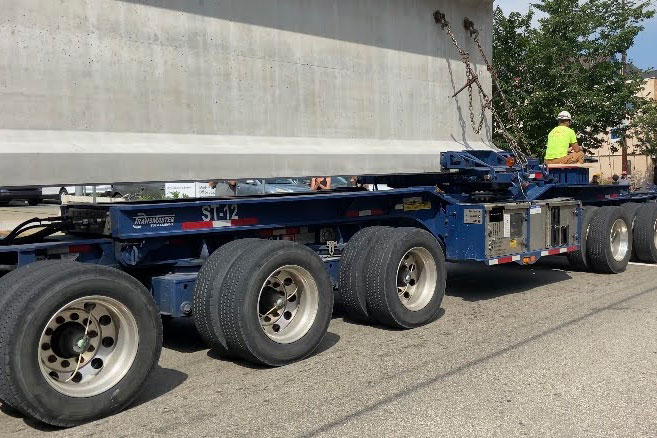 The beams are made by PennStress, a division of the MacInnis Group LLC., in Roaring Spring, Pennsylvania in Blair County. Each of the beams takes 24 hours to make, and then they embark on a 3.5-hour trip to the city.

PennDOT doesn’t yet have a timeline for completion, but it has warned of traffic disruptions along the Parkway East and South Braddock Avenues on Aug. 12, 15 and 16 as superloads carry beams to their new homes. The following ramps will close to traffic during the deliveries: