Birthday parties, Easter egg hunts and fun activities are still able to happen, even in the midst of a pandemic, with a little creativity. 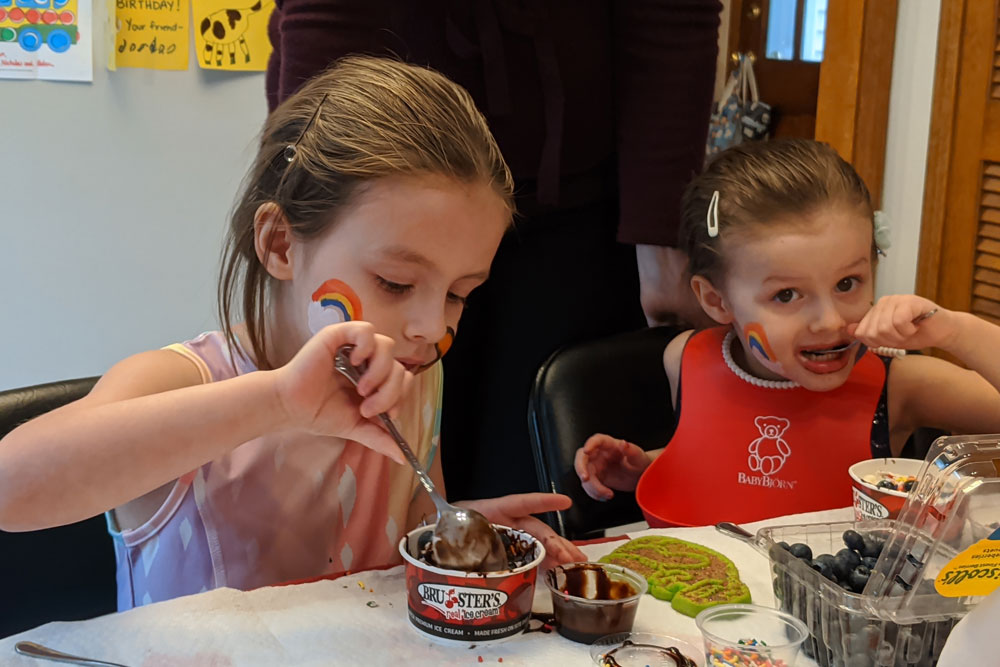 Trying to keep some semblance of normalcy during a pandemic is hard, but parents of small children face an additional challenge of trying to explain why certain special activities such as birthday parties and Easter egg hunts aren’t happening.

But it turns out, they can still happen, they just may look a little different.

In the week leading up to Easter, several communities are organizing touch-free Easter egg hunts by encouraging residents to decorate and hang paper eggs in their windows, on their doors or anywhere people can spot them as they walk by.

“As you walk around the neighborhood through the week, you can ‘hunt’ for eggs,” according to an email from Edgewood Borough. “This event is for ALL AGES, and we welcome our neighboring communities to participate!”

The borough even offered a website for free printable egg templates and reminded anyone out walking to limit their group to immediate family and leave 6 feet of space between anyone they may pass. 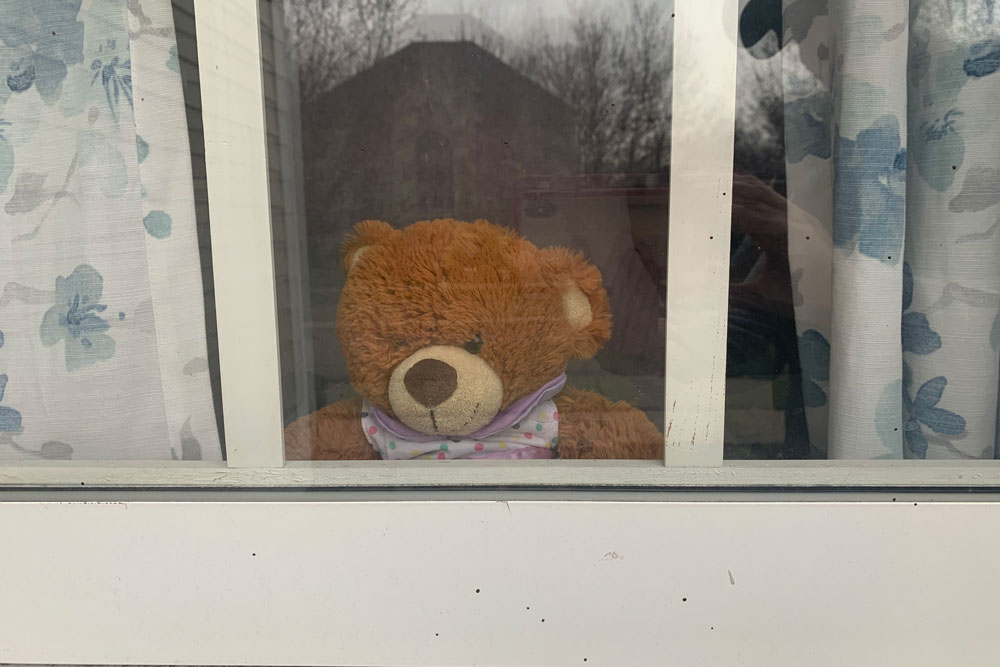 Some caregivers have even found a way to make simple walks more entertaining for kids. In some neighborhoods, residents are using social media or community apps such as Nextdoor to arrange for touch-free teddy bear scavenger hunts.

In this scenario, neighbors add a teddy bear or a drawing to a window or two of their homes. Walkers old and young can search for the bears as they pass by the houses. In some cases, neighbors are adding a new teddy bear to a window each day to keep things interesting.

For extra credit, you could also print or draw a teddy bear “bingo” card and have your kids mark an X each time they spot a bear. At the end, tally the results — and maybe have the kids draw their favorite bear.

Even birthday parties have gone virtual, although they may take a bit more organization.

Liz Huber, who lives in the North Hills, had already been planning her daughter’s March 30 birthday for weeks before the stay-in-place order was issued. She discovered through social media that ice cream shops in other parts of the country were offering to-go kits so that kids could make their own sundaes along with the birthday kid as part of a virtual party.

“Parents could go and pick it up, and it’s already been paid for so it’s minimal contact, and it’s something all the kids can do together,” Huber says. 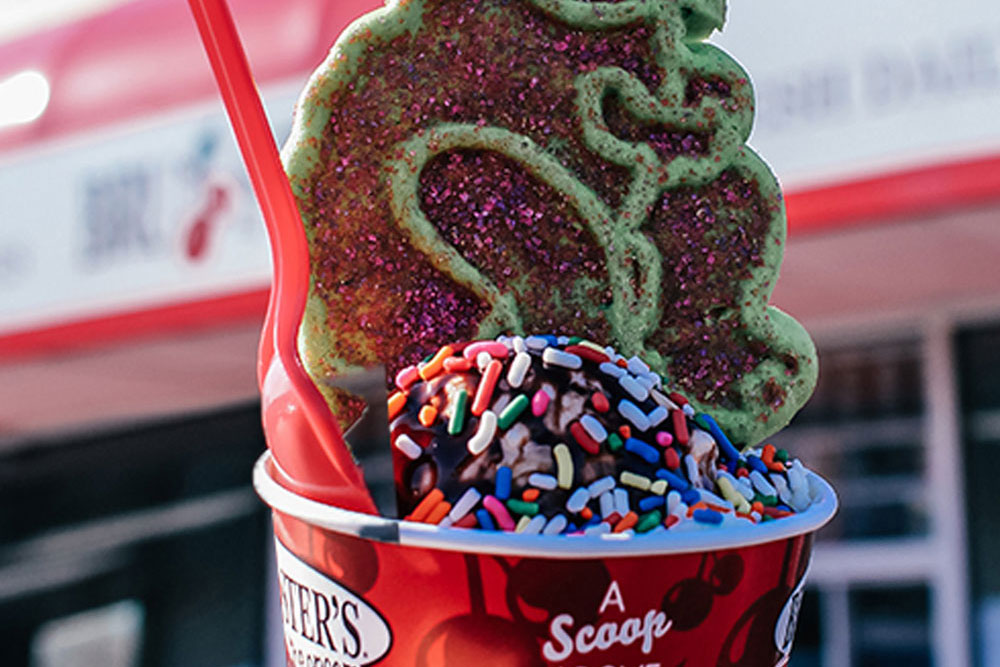 She contacted her local Bruster’s Ice Cream shop in Ingomar, owned by Mary Mann and her husband, John, and Mary was immediately on board.

Mann says she chose the Bruster’s dino sundae, which includes a dinosaur sugar cookie, a scoop of vanilla ice cream, a small cup of chocolate syrup and a cup of sprinkles because it’s easy for kids to assemble. Other Bruster’s locations (the company is based in Bridgewater, Beaver County), which are all take-out only at the moment, have the option of adopting the to-go kit.

“This is a time that none of us are used to. We’re totally all out of our comfort zone here,” Mann says. “I’m just here trying to make everyone happy.”

Even after the pandemic, Mann says she’ll continue to offer the to-go kits in case anyone wants one, such as grandparents who want to interact with out-of-town grandchildren over Skype. 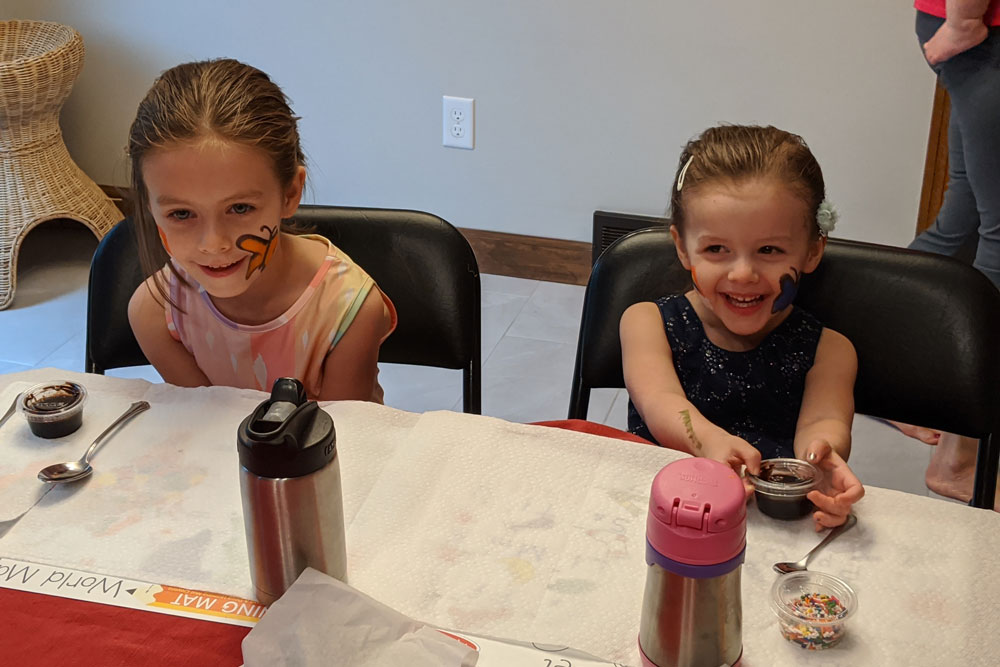 Huber says her daughter, Isabella, who turned 6, was disappointed they had to postpone the in-person party, but she was a trouper. Huber incorporated some of the activities she had originally planned on, such as a magician, into the virtual party, conducted via Zoom.

“They don’t understand [the situation] exactly, and we want to make their birthday special, and they still want to see their friends,” Huber says.

Isabella’s dad conducted a magic trick, her friends and little sister made their ice cream sundaes, they read a birthday book, sang “Happy Birthday” and ended with a dance party.

It was all as interactive as possible, which is one reason why Huber says she liked the sundae idea in the first place — everyone could participate even if they weren’t together.

Huber also asked friends and family to send birthday cards for Isabella to hang on their wall.

“How often do kids get things in the mail?” she says. “Every day she is so excited.”

Categories: Hot Reads, The 412, Things To Do