How to Get In and Out of Pittsburgh on Marathon Weekend

Stay up to date on road closures and parking restrictions, which could create a major headache in Oakland — the University of Pittsburgh’s commencement is on the same day. 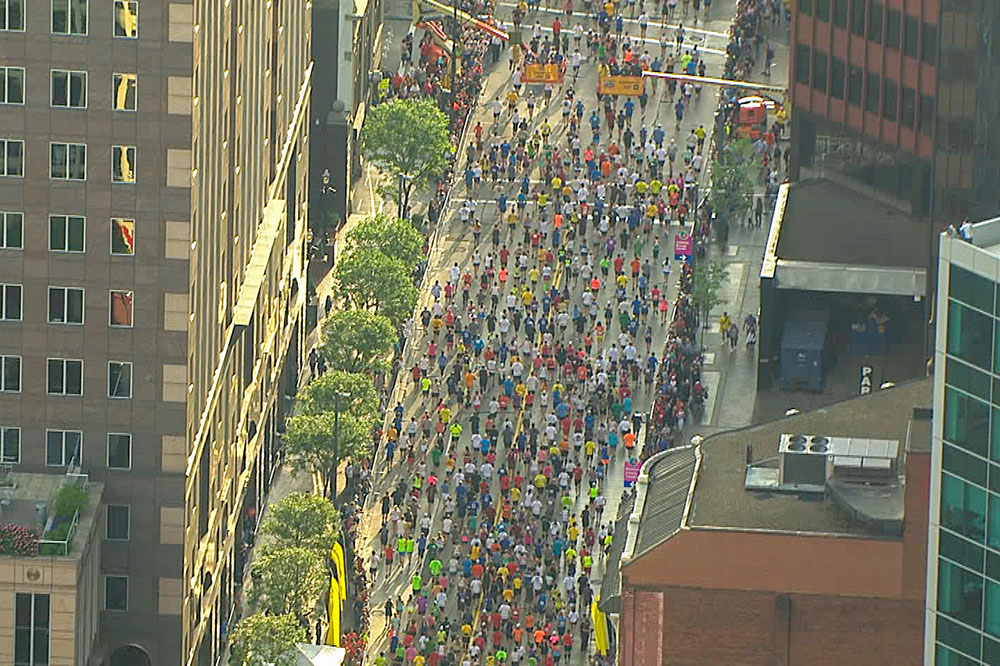 If you’re planning on running — or walking — any of the Pittsburgh Marathon races this weekend, you might want to consider leaving the car at home in favor of alternative transportation methods.

Earlier this week, the city announced road closures related to the marathon, which will be held on site for the first time after COVID-19 canceled the annual in-person race in 2020 and 2021 (It was offered virtually in those years). More than 30,000 people will participate in one or more of the weekend’s events, and tens of thousands of others will watch from the sidelines. Because it’s such a major event, the city says residents should be aware of preparations that include road closures, parking restrictions and enforced towing.

The marathon begins Downtown and weaves through 26.2 miles of various city neighborhoods in all directions, including the East End, West End, South Side and the North Side. The city has spent months notifying the residents who will be affected, and signs have been posted to signify the impending closures. Cars that are parked along the route will be towed starting at 11 p.m. on Saturday, April 30.

“Residents along the route should not wait until the last minute to move their vehicles,” said Public Safety Director Lee Schmidt in a statement. He adds that if someone’s vehicle is towed, Public Safety will help direct its owner to its location.

Downtown road closures are slated to begin Friday at noon on the Boulevard of the Allies between Wood and Stanwix streets. This road will be closed until the conclusion of the final race on Sunday.

Additional road closures will occur Saturday on the North Shore and Downtown for the 5K and Kids Marathon, but parking will still be available on the North Shore; the new 5K courses will allow its parking lots to remain open and accessible.

Sunday — the day of the half and full marathons and relays — will see the most traffic disruptions, with closures beginning along the marathon route as early as 1:30 a.m. on Sunday. Many major throughways will be temporarily restricted, including parts of Liberty Avenue, East Carson Street and Commonwealth Place.

The road closures are likely to create a unique headache in Oakland for those attending the University of Pittsburgh’s commencement ceremony, which will start at 2 p.m. in the Petersen Events Center.

Pitt has also compiled a guide to travel routes and parking for anyone who might be affected by the marathon-associated road closures. Its shuttle service will be running, too, but nevertheless, the university advises those attending most of its events that day to allow extra time for travel.

In other parts of the city, the Crosstown 576 ramp will also be closed in places; you will be unable to exit into Downtown or Uptown on Sunday, and you won’t be able to enter onto 576 southbound at the Seventh Avenue ramp.

A “pink zone” Downtown will also be completely closed to traffic from 5:30 to 9:30 a.m. on Sunday. This area encompasses PPG Place, PNC Plaza, Market Square, Point Park College and surrounding streets. If you are going to be in that area and may need to leave during that time, consider parking your car outside of the area so you can exit with ease.

Port Authority bus routes will be running all weekend, though some bus lines may have modified stops because of the closures. Marathon organizers suggest using the T when possible; Pittsburgh’s subway system is free within Downtown and the North Shore, so it could make for a handy alternative to trying to drive around the road closures in those areas. The city also has multiple other alternative transit options, including POGOH bikes, Spin scooters and Scoobi mopeds.

Folks who have to get in or out of the city by car should use the app ParkPGH to find real-time information on parking facilities during race weekend.

For a full list of closures and restrictions, check out these resources on the Pittsburgh Marathon website.