How He Makes the Mundane Sound Magical 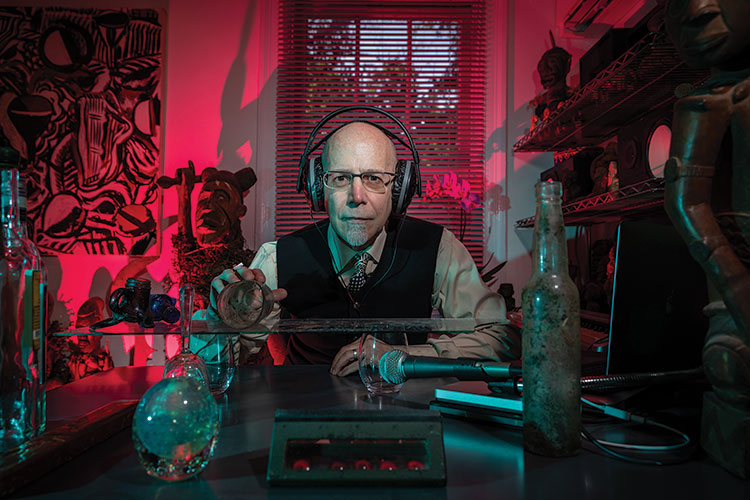 The cyclical thrumming of a pot lid wobbling in its base. The susurrus of paper against paper. A wad of tape. A bird.

These are the sounds of everyday life — potentially forgotten or unnoticed and often unheard. Unless you’re R. Weis. If you’re R. Weis, these sounds are the key to unlocking the mystery of the mundane.

Weis is an experimental sound artist who has spent the last three decades sampling and manipulating the humdrum of daily life into extraordinary compositions. His source materials range from Tupperware to squeak toys to his friend’s African grey parrot.

“I try not to make anything perfect,” says Weis. “In the early days, I was trying to make the perfect sample. Now that’s not interesting to me. The messy samples are the interesting ones, because they have all kinds of things going on in them that you don’t discover until you hear them slowed down or you hear them again and again — and you realize, oh, there’s a musical pattern in there.”

Robert Weis was a weirdo who outgrew the Pittsburgh weirdo scene in the early 1980s. A Jeannette native, he relocated to New York in 1982 and entrenched himself in the avant-garde of pre-Giuliani Manhattan. At the time, he was writing poetry and monologues; he eventually swapped those autobiographical pieces for experiments in sonic manipulation.

He lived and worked in New York for 16 years, then a few in California, building a composition based on the structure of DNA and scoring pieces to accompany choreography and art installations. In 2003, he composed “Dog Choir,” his first canine collaboration, for an exhibition in Paris.  “Dog Choir” prompted a realization: when listeners could easily contextualize the source of his samples, they understood his compositions more easily.

This revelation led Weis from the esoteric to the commonplace. He returned to Pittsburgh in 2006 and released three albums of compositions made from the familiar; one features sounds heard in his former Mexican War Streets home (he now lives in the northern suburbs), while another features the singing of the aforementioned parrot alongside the thunking of a dropped paperback.

Weis’ newest project, “Glass in Your Ear,” narrows that focus to just one source: glass. Inspired by a yard cleanup, the often hypnotic EP is composed of sounds made from shards being tossed against one another as well as a glass bell with a glass tongue. The glass can sound as if it’s growling, but it can also sound like an interstellar message from extraterrestrials. It can be staccato and percussive, or almost feral.

“The sounds point me in a direction. You can change the sounds a little bit here and there … I have to follow what the sounds will give me. Sometimes they give me something pretty … for the most part it’s intellectual.”

Weis doesn’t perform live. He likens his compositions to paintings, coming together slowly, with time and consideration adding depth. “It’s not something that I do spontaneously. It’s something that gets built up and layered and assembled over time … This is what I’ve been doing for 30 years, and I want to explore it as deeply as I can and put out the best quality work that I can.”

This article appears in the August 2019 issue of Pittsburgh Magazine.
Categories: Community Feature