The farm with the unusual name produces varieties of about 350 pounds of mushrooms a week. 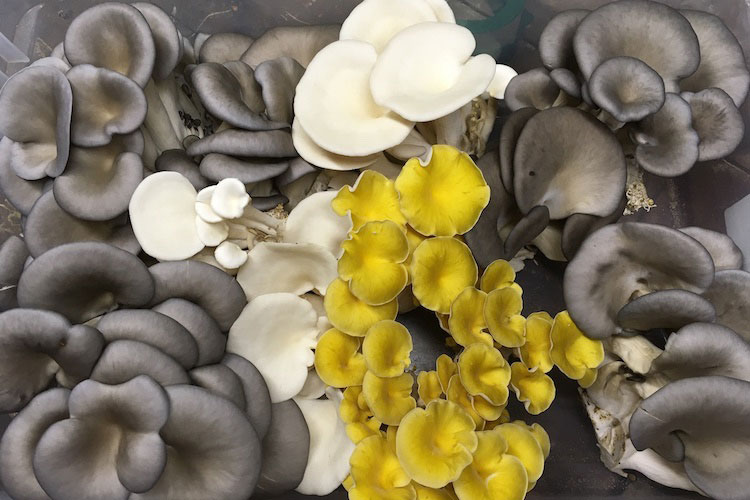 A few months ago, artfully arranged boxes of mushrooms began showing up in the kitchen at Bar Marco, where I work. Delicate oysters, perky Speckled Chestnut and King Trumpet mushrooms would arrive every Wednesday with Kerri and Mike Stoltz, the owners of Fat Caps, a mushroom farm they run from their home in Duncansville.

The Stoltzs started Fat Caps in May 2018. It was a steep learning curve as fluctuations in temperature and humidity affect growth and different varieties prefer unique growing conditions. “We had a huge failure rate for the first couple months,” says Mike Stoltz.

New to mushroom cultivation, the couple turned to books and YouTube to help answer their questions. Soon they were growing enough to take to farmers markets. A year later, Fats Caps produces around 350 pounds of mushrooms a week. Their business now is exclusively sales to restaurants; Talia, DiAnoia’s Eatery, Rolling Rock Club and handful of others in the region are their clientele. They hope to continue to expand the business, but, Stolz says, “It’s just as hard as getting an appointment with God [to get chefs to talk to them]. We want to try growing new and funky varieties for people to try.”

The Stoltzs’ 30-by-50 foot basement serves as their growing room and is hermetically sealed with negative pressure to keep spores from permeating the house. From the start of growth, most of the varieties are ready to harvest within four to 10 weeks. “We see the profit almost immediately,” says Stoltz.

Fat Caps currently grows Blue, Elm, Snow, Golden and Italian Oyster mushrooms as well as Speckled Chestnut, Beech and King Trumpets. The couple are also attempting to grow Lion’s Mane mushrooms, which have been used for centuries in Asia as medicine and are now being researched by Western medicine for their potential in treating neurological disorders, particularly multiple sclerosis.  “We heard they are great for MS, so we immediately wanted to try them,” says Stoltz.

The Stoltzs began farming after Kerri’s 2006 MS diagnosis. The medications she was on gave her severe mood swings, affecting her marriage and quality of life. She and Mike decided to try to treat her symptoms with a diet of whole, non-processed foods. “When I brought up going off my medications and trying a holistic approach, the doctor showed me the door,” says Kerri Stoltz.

They started raising chickens and vegetables, and eventually pigs and rabbits. Within a few years, Kerri’s condition had improved (she says she now takes no medications) but the farm became too much work.

Fat Caps has been a way the Stotlzs to have a farm that is less labor intensive while still focusing on healthy foods. The name reflects who the couple is as well as whatthey grow.

“Neither Mike or I are skinny people. I always wanted call us Two Fat Farmers but when we started the mushrooms we went with Fat Caps. I had to get ‘fat’ in there,” says Stoltz.