Cody Sabol has made a name for himself speed painting Pittsburgh athletes. His latest endeavor has him painting cleats for the Steelers. 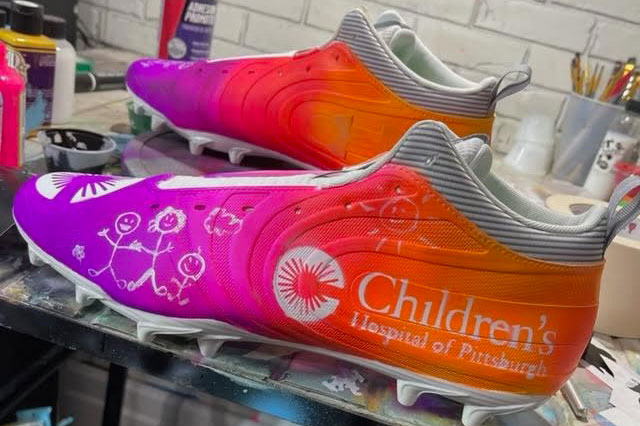 As the Steelers football season draws to a close, a busy few months for Cody Sabol are wrapping up as well. Sabol, while not a player, has made his own mark on Heinz Field this year, one that can’t be measured in completed passes or touchdowns, but in brightly colored painted cleats.

The Steelers took to Heinz Field during Week 13 in early December wearing customized cleats Sabol created for My Cause My Cleats, a yearly campaign started by the NFL to raise awareness for causes and charities chosen by players. At the end of the game, players auctioned off their cleats to raise money for their respective charities.

This year’s cleats are just a fraction of Sabol’s portfolio, which includes dozens of other cleats he’s painted for Steelers and Pirates players as well as portraits requested by some of Pittsburgh’s most notable athletes, including Penguins Mario Lemieux and Sidney Crosby. But in his TikTok bio, he’s humble, describing his occupation with one word: “finger painter.”

“Part of it’s poking fun at myself. I try not to take myself too seriously, but in a healthy way I think,” he says.

Technically, Sabol’s self-proclaimed title is true; he’s known for speed painting the portraits of celebrities and athletes in under 15 minutes by using his hands instead of a paintbrush. He also speed paints in front of audiences, wearing black pants covered with bright paint stains and finishing each painting with a one-of-a-kind signature: his own handprint stamped in the corner of the canvas. Most recently, he did a live speed-painting of Dan Marino and Kenny Pickett at the Peach Bowl as well as one of Ben Roethlisberger at Monday night’s football game against the Cleveland Browns at Heinz Field.

Sabol, 26, started painting while in college and rose to prominence in the Pittsburgh art scene — and sports scene— shortly thereafter.

“From an early age I just loved trying to replicate what was in front of me in the real world, you know, like ‘how close can I get this to look like the real thing?’”

Sabol pursued a degree in biblical studies and preaching ministry at Kentucky Christian University, where he also played quarterback and linebacker on the football team. While there, he drew Pittsburgh athletes during his free time as a way to “break up the monotony of football and studying.”

By the end of college, Sabol, who mostly drew with colored pencils and graphite, taught himself how to speed paint portraits.  His big break came in the summer of 2017 when he painted Phil Kessel, a former penguin who played for the USA Hockey Team at the 2014 Sochi Olympics, in just 12 minutes. Sabol made the painting as a goof, calling it “The Pittsburgh Mona Lisa.”

But when the painting took off on social media and was picked up by NHL.com it was no joke — Sabol was invited to speed paint on the NHL Network and was also featured on WTAE-TV. The attention led to gigs painting at charity events for the Pirates’ Josh Harrison event and the Steelers’ Cam Heyward, and his name spread to other Pittsburgh athletes through word of mouth.

“You do something for an athlete and then one more reaches out and they’re like ‘Oh can I get this?’ and we just keep that train rolling for quite a while,” he says.

Then a preacher at The Bible Chapel in the South Hills and Robinson, Sabol left the ministry to pursue art full time. By the fall of 2018, he had been asked to create art for Vance McDonald, Antonio Brown and Sidney Crosby.

Crosby “was the first one where I was like ‘Oh my gosh, this is big-time,’” Sabol says. “I  remember drawing him on some loose-leaf paper when he was drafted when I was like 10 years old.”

Still, Sabol, who was never formally trained, had difficulty considering himself an artist. He developed his skills as he went, each project teaching him “100 things on the fly.”

“I remember feeling completely out of my league. It was kind of this fake it until you make it mentality because I was really insecure about my skill level as an artist,” he says.

Painting cleats was uncharted territory for Sabol until former Pirates pitcher Trevor Williams asked the artist if he could make him a custom pair.

“I should have said no but I said ‘Yeah, of course, all the time,’” Sabol says.

Similar to his other artistic endeavors, he learned as he went.

One pair of cleats led to several more for former Pirates Jameson Taillon, Josh Harrison and Chad Kuhl, but not without a few mishaps along the way — like when he used the wrong kind of paint on a pair of cleats for Steeler Vance McDonald.

The Steelers “played in Los Angeles and the paint melted on the way there. It was a disaster,” Sabol says.

Still, McDonald, who Sabol says is “so kind,” asked him to paint another pair of cleats the following year.

“Each one of the Steelers is a different personality — good personalities,” Sabol says.

Sabol did his best to capture the players’ personalities for My Cause My Cleats.

“I look at it as a unique opportunity to help these guys express themselves,” Sabol says. “When I see Trey Edmunds wear the mental health awareness cleats I know why he chose that because we talked about it a little bit.”

One pair of cleats takes at least 6 hours to paint — though Sabol says he’s made a pair for Roethlisberger that took 25 hours — so Sabol recruited the help of Vinnie Candelore, a local artist and friend he shares a studio with, to help out for My Cause My Cleats. 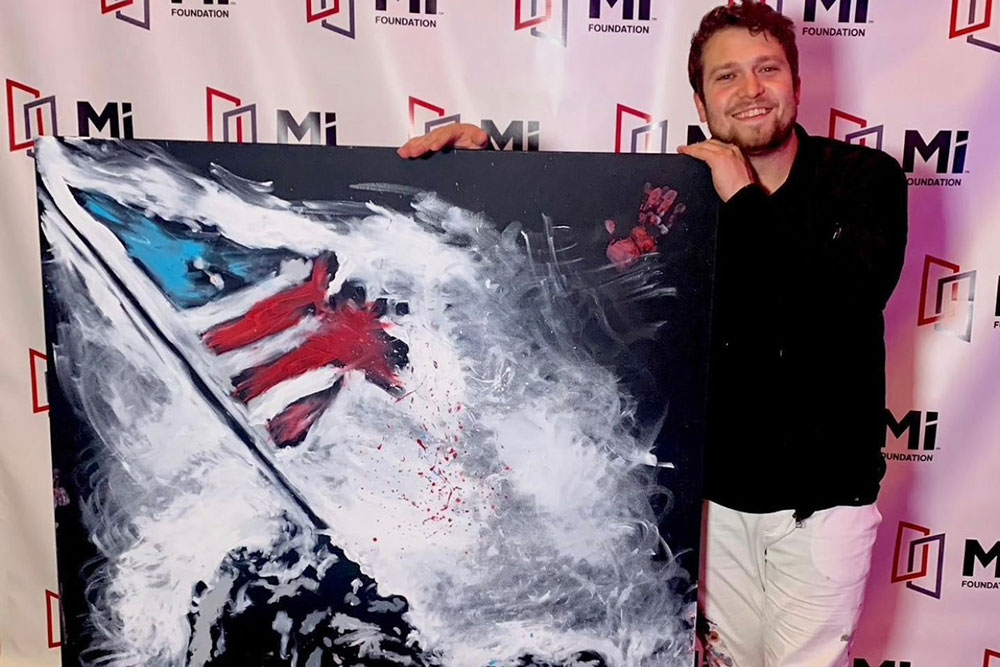 When he’s not picking up cleats from Steelers equipment managers or Pittsburgh athletes about their customized artwork, Sabol spends his days live painting at charity events, where his work is often auctioned off. This past October, he painted Raising the Flag on Iwo Jima upside down in front of a live audience before turning the iconic scene from World War II right side up.

“It’s funny because it just looks like blobs of paint and then you flip it over and hope it looks like something,” Sabol says.

Not only did it look like the real thing, it was auctioned off for $42,000 dollars for the MI Charitable Foundation. This is just one of his few pieces with a big price; last fall two other paintings were auctioned off for charity at over $40,000 each with a couple of others going for over $25,000 each.

“Sometimes it feels like a dream. You can’t believe somebody loves your stuff that much they would buy it or auction it off that much, but also I get so impressed with how much people want to help,” says Sabol, who is married with two children.

He thanks Pittsburgh for his overwhelmingly successful career. “I don’t think I could have done this in any other city.”