Columnist Chris Fennimore recounts his New Year’s Eve food traditions — and why each item tells a story — in our new feature: Home COOKING. 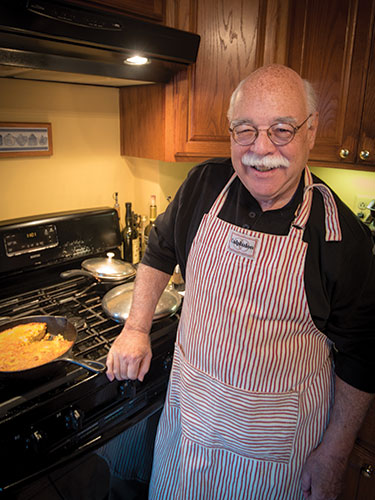 But food traditions don’t have religious or geographical requirements; they are completely adaptive and adoptable. And that is why I celebrate every New Year with a delectable and hopefully “lucky” batch of southern-style black-eyed peas.

My family, like so many others, has their share of food traditions: For example, we eat nothing made of wheat on the Feast of Santa Lucia (Dec. 13) to honor and commemorate the miraculous appearance of a shipment of grain to the starving people of Palermo in the 17th century. It is the only day of the year where Italians don’t have any bread and pasta on the table. Arancini, meat-filled rice balls, are a common substitute, as are lupini and fava beans.

Christmas Eve dining is restricted to a variety of fish dishes; seven in some families, but as many as 13 in others. Part of that tradition was religious because the Eve of Christmas was designated as a day of abstinence by the Catholic Church until the 20th Century. By then, the tradition was more compelling than the rule, although many families today continue the observance.

Eating cream puffs on the Feast of St. Joseph (March 19) was another tradition. This was also my father’s name day, and we children probably thought the tradition came from how much Dad enjoyed these sumptuous treats. Some people refer to the dish as “Sfingi Di San Giuseppi;”  this loosely translates to “The balls of Saint Joseph” and was the cause of much adolescent giggling.

The list goes on and on, and it changes for every family. But back to the black-eyed peas.

When Dad signed up for the Army in World War II, he was sent to New Orleans for training in the Air/Sea Rescue Division. He and my mother had just married and she followed him there, staying in the home of a local family with the hopes of seeing him while he was on leave.

She taught her hosts how to make spaghetti, and in return they taught her the way around southern favorites such as cornbread and black-eyed peas.

The rest is history.

During the next 50-plus years of their marriage, Mom never failed to have a delicious bowl of the beans to serve with our New Year’s dinner. And if their marriage is any indicator, the beans did their magic.

The idea is that the little mottled peas represent coins or money, and so you wanted to eat as many as possible to ensure a prosperous New Year. I have added a monetary extension to the dish with the addition of some “folding money” in the form of leaves of collard greens.

Here’s to good luck — and a Happy New Year! 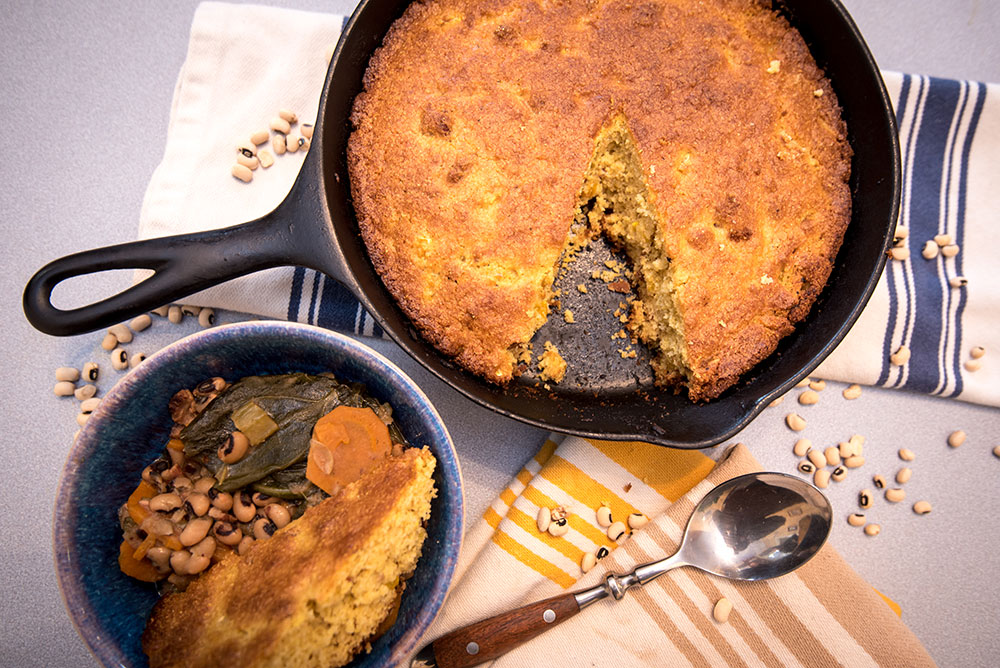 2 cups of black-eyed peas, sorted to remove any stones and washed

Salt and pepper to taste

Starting in a cold pan, fry the bacon over medium heat until crispy. Remove to a paper towel to drain. Add the onion, celery and green pepper to the pan and saute until the onion begins to brown. Add the stock and the peas. Bring to a boil, then reduce to a simmer. Cover partially and continue to cook for 20-30 minutes until the peas are tender. Add the collard greens and carrot slices and simmer until they are tender. Serve with Louisiana Hot Sauce and cornbread (see below).

(Here’s another “lucky” recipe for wealth in the New Year as corn bread symbolizes gold.)

Preheat the oven to 400 degrees. Put bacon slices into a cold, 10-inch cast iron skillet over medium heat. Cook, turning frequently, until crispy. Remove the bacon. Mix together the dry ingredients. Beat the egg and buttermilk. Add the bacon grease from the pan to the milk mixture and then mix with the dry ingredients. Fold in the crumbled bacon and frozen corn and pour into the skillet. Bake 20-30 minutes until a dark golden brown (and a toothpick inserted into the center comes out clean).

A lifelong home cook with a big Italian-American family, Chris Fennimore was the longtime program director, as well as the popular “cooking guy,” at WQED. In 1993, he began producing and hosting the series “QED Cooks,” which won a James Beard Award and an Emmy. He has produced, contributed to and edited more than 100 community cookbooks in WQED’s “America’s Homecooking Series.”

This article appears in the January 2023 issue of Pittsburgh Magazine.
Categories: Home Cooking