A legendary local name in fine dining and the culinary savvy to back it up arrive in Highland Park with Joseph Tambellini Restaurant. 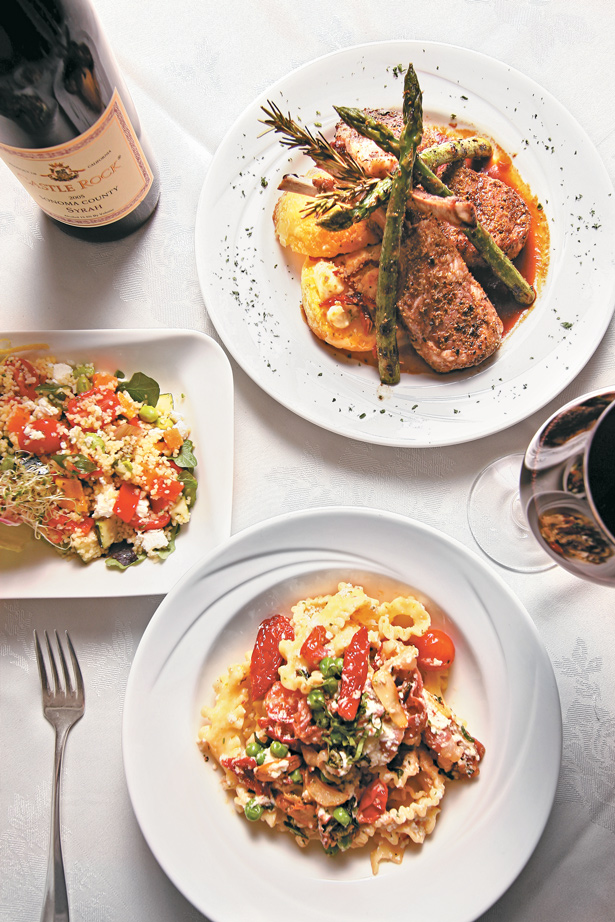 Tennis shoes, not family legacy, were the initial stimulus for the Joseph Tambellini story.

On Aug. 26, 1979, 11-year-old Joe Tambellini was a bit nervous as he approached his father, Robert, to request a new pair of tennis shoes–leather Pro Keds. After he blurted out the price tag, $40, he remembers his Dad’s exact words:

“To work I went, and to work I stayed,” roars Joe.  “It gave me heart, and it gave me a backbone. Of course, he [Dad] could have given me the moon, and at the time, I was slightly miffed.”

But Joe earned his shoes and eventually his stripes. For six years, he washed dishes, peeled carrots and onions, and ran up and down the steps of the busy restaurant, Robert Tambellini’s on Liberty Avenue, owned by his father and Uncle Joe.

“I had to come up the ranks, and though some kids thought I had it easy, I actually had to work harder. I could never call off.  I had to cover. But I found that I loved it, loved every moment of it.”

And so a boy became a chef, in a family of chefs.  Joe continued to pay his dues, moving on for a year to Louis Tambellini’s on Route 51, followed by a private catering job,  then stints as a chef at Primetime Sports Bar, Carmassi’s Tuscany Grill and Bravo Franco.

At the next plateau in his career, he refined his diverse culinary experiences, blending them into his own unique style during seven full-throttle years at Franco’s Trattoria as executive chef, becoming a talented gourmet with a name and a following.

And then a swanky little French restaurant, Laforêt, at the top of its game provided the perfect allure for Joe and his wife, Melissa, to venture out on their own without losing career momentum. “I was nervous about leaving such an awesome job [at Franco’s Trattoria], but I didn’t want to wake up 70 years old saying, ‘Coulda, shoulda, woulda.’” And so, at age 39, he launched Joseph Tambellini Restaurant.

The restaurant seems to be inserted into Bryant Street with a touch of the irrational.  It’s housed in an old brick four-square painted white with black trim. The restaurant’s exterior reminds me of the backdrop scenery from a contemporary Sarah Ruhl play. If you’re heading west on Bryant Street, Lou Iezzi’s Auto Body juts out just far enough to initially obstruct the view. “I thought we were looking for olive oil, not motor oil,” joked my husband, Brad, straining for a glimpse of the demure domicile, which suddenly appears as if in its own little world.

And if you’re wondering why the interior still retains Laforêt’s well-manicured French-restaurant décor, that’s because Joe and Melissa are renting with an option to buy. They have added a third-floor party room, a retreat-cum-surreal ski lodge that features a pitched wooden cathedral ceiling with furtive angles.

Tambellini is modest and hard-working. He also has a great sense of humor: “God’s done all the hard work; I’m just tryin’ not to screw it up on the way to the table.”  He also has a way with kids and loves what he does. Respect for ingredients and methods is second-nature. Customers are welcome to rap on the kitchen door, and kids know that Joe will let them help him build his famous wild and rampant dream desserts in the shiny cucina.

“I like to do old standbys to accommodate the part of local Pittsburgh that calls for them”—the marsalas, piccatas, parmesan. But there is subtle fire in what he has tagged  “refined classical cuisine,” a mixture of the great Italian standards and creative, seasonal dishes modified by innovative sauces and fillings lightened up to perfectly compliment a dish. A pasta course between salad and entrée has returned.  And a suggestion: At least share a meatball, even if you’re having scallops.

If you’re ravenous, the antipasti rustico eclipses all other choices, with a delicious proscuitto from Pennsylvania Macaroni. “I want to squeeze it when I buy it,” he says.  A smaller leg is drier and gives a better flavor when sliced down. Crab balls with twin sauces are a house favorite–think jumbo lump crab, romano-style, drizzled with a duo: sweet-and-sour and honey mustard.

Go lightly on the thick-cut Mediterra Italian bread and herby dipping oil.  Soup or salad is included, and here is a nice little touch: Dinner salads change frequently. With heirloom summer tomatoes around the bend, generous soft coins of quivering fresh mozzarella laid over freshly sliced tomato with some couscous and diced vegetables on the side should be perfect. Like butta.

The fish comes across the turnpike from Samuel and Sons in Philly, which I hear about more and more these days.  An order can be placed until 11 p.m. for the next day.  The U-10 scallops are amazing, sautéd and served with jumbo shrimp, shaved garlic and white wine; or try them in a dish called Seafood Melissa, a melange of shrimp, scallops, a lump crab cake and a featured fish. That allows for a creative turn with anything from skatefish to Thai snapper in a simple but classy citrus beurre blanc. The dish is a tribute to Joe’s wife and partner, who Tambellini says gets far too little credit for having jumped careers (she was a devoted social worker for 20 years) to take over the front of the house.  Her way with people glows, and though Joe still pals around the floor on a busy night, he explains, “When I have to, I can just cook.”
These spring days, a domestic lamb chop is rubbed with wild-fennel pollen, sea salt and fresh black pepper, preserving the inherent flavor and standing up to any I’ve tasted lately. A fat and happy double-cut, parmesan-crusted pork chop with hot and sweet peppers is succulent. Also good are chateau-cut (center only) filets with shallots, garlic and mushrooms bursting with bold red wine.

Regulars often stump servers when they ask for an “FOJ,” an inside joke that now stands for “friend of Joe” portion.
Pasta in an Italian/Pittsburgh restaurant is a touchy item in an overcrowded field, and it requires a superior product, including some born-again shapes and flavors.  All must be pitch-perfect al dente. Tambellini’s tagliolini and trenne noodles are fresh and hand-made. 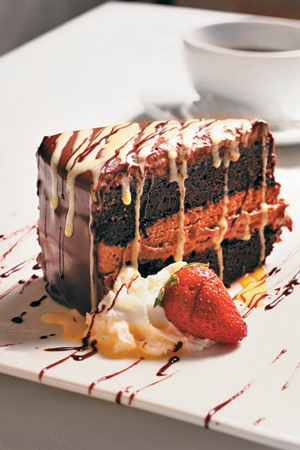 I love the trenne with shrimp arrabbiata, a spicy tomato-basil sauce that first  infuses extra-virgin olive oil with toasted pepper seeds and fresh herbs, then adds caramelized red onion. The oil, which eventually obtains a greenish-reddish hue, holds the flavor, leaving a hint of sweet onion at the front palate and a smooth finish. The shrimp is Venezuelan, if Tambellini can get it, simply because he thinks it is the sweetest.

By dessert, portions were not yet a blur. Word on the street is that a decade of too much panna cotta and overextended traditional trends has made diners and chefs equally cynical about dessert. Not so at Tambellini. Currently “deep” into dessert, Joe has been experimenting with different twists on traditional themes: banana-nut-bread pudding that uses Belgian waffles, pineapple creme brulee and coconut gelato. The cannoli, pecan ball and a flourless, Callebaut-chocolate cake are outstanding. And the only thing Tambellini doesn’t make is just as memorable—the now-famous butterscotch pound cake, created by one Mrs. Poundcake (a.k.a. Diane Brown of Wilkinsburg).

This article appears in the May 2008 issue of Pittsburgh Magazine.
Categories: Restaurant Reviews