AS OF JULY 9, PITTSBURGHERS CAN RENT AND RIDE ELECTRIC SPIN SCOOTERS UP TO 15 MILES PER HOUR ON CITY STREETS | PHOTOS BY KAITLYN NUEBEL

By now, you’ve probably seen several people darting around Pittsburgh by way of bright orange scooters. And if you haven’t, you will soon — the city is working to increase the number of electric Spin Scooters to 1,000 in the coming months.

The recent fleet of rentable Spin Scooters is part of Move PGH, a two-year program stemming from the Pittsburgh Mobility Collective, a collaboration between the city and several transportation services.

Officially launched July 9, Move PGH aims to make navigating Pittsburgh more affordable and easier for everyone, especially those without a car. The program is the first in the country to provide real-time information about multiple modes of transportation — Port Authority buses, Spin Scooters, Healthy Ride bikes, Waze Carpool services, Zipcar and Scoobis — through just one app: Transit.

Anyone 18 years and older can locate available Spin Scooters in Pittsburgh by downloading the Transit App for free; they can rent them for a starting fee of $1 plus 39 cents per minute. Riders with low incomes can apply for cheaper rates through the Spin Access program.

Once a payment option has been entered and the scooter is unlocked, riders can lift the scooter’s kickstand and roam around the city like they would on any non-electric scooter. For a boost, they can press a button next to the right handlebar with their thumb, which can increase their speed up to 15 miles per hour.

Each scooter has two brakes–one by the left handlebar that functions similarly to a bike brake, and one covering the back wheel, which riders can press down on with their foot.

A week after the city made Spin Scooters available to the public, Lolly Walsh, director of Move PGH, said there have been some “growing pains.”

“The past week we have been … dealing with various concerns of residents and just working to ensure that people have the knowledge to both ride safely and carefully and considerately, and also to park the scooters in a way that doesn’t obstruct the sidewalk or make anything more complicated for the rest of the users of our city streets,” Walsh says.

The scooters, which are only permitted on Pittsburgh streets with speed limits less than 25 mph and in bike lanes, must be parked in legal parking areas or next to bike racks. But some users have overlooked this rule. As of Friday morning, Walsh says there have been about four complaints regarding electric scooters, which have come through Twitter and Spin’s emergency number. 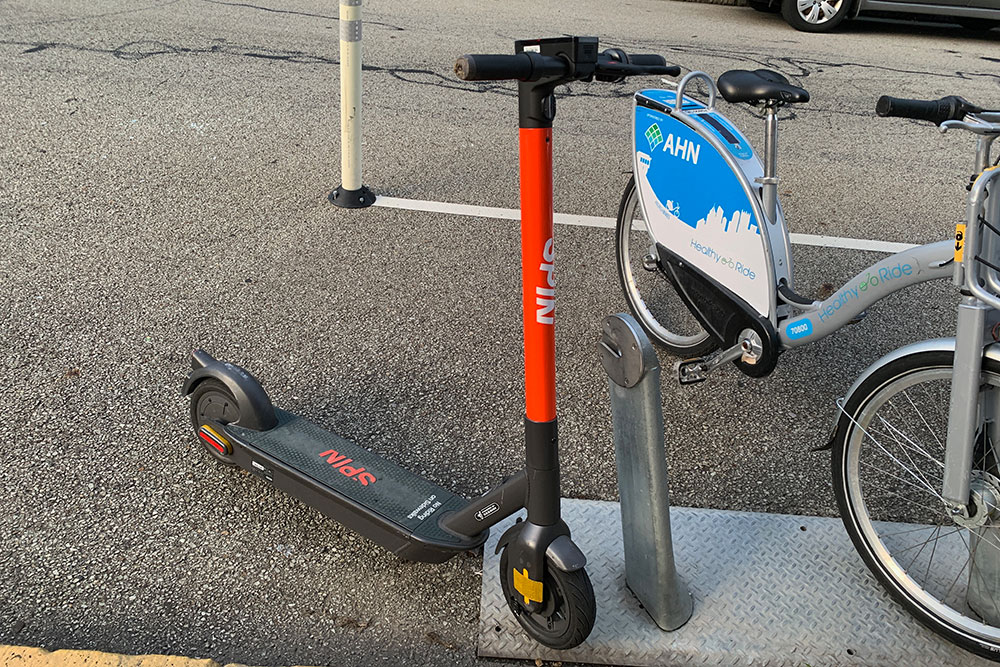 One complaint on Twitter involved four Spin Scooters left in a bike lane — a risk to bikers who might not see them until it is too late. Another complaint came through the city’s acting director of transportation, who called Walsh about a set of scooters that needed to be moved. Walsh then called Spin, who she says had them removed within a half-hour.

Good morning, @BikePGH @PghDOMI @ridespin. While commuting to work this morning, I ran into four of these scooters parked in the protected bike lane at Penn & 16th. Will this be the norm since the city signed the deal with these scooter companies? I almost collided with them. pic.twitter.com/yyiIVxRpey

“We have to ensure that all users of the scooters are aware of how they can park them,” Walsh says. “This has been one of the largest concerns all along.”

To make designated spaces for scooters, Move PGH has contracted with Landforce, a construction and land maintenance organization to install over 100 “scooter corrals” at the end of streets. The corrals, smaller than a parking space, will serve as a designated place for scooters and bikes that users can find through the Transit app.

Walsh says the plan is to have the land corrals in by August, specifically in areas with dense pedestrian activity. In the meantime, guidelines will be reinforced with temporary signs, though she doesn’t think this will be nearly as effective as implementing scooter corrals.

“As far as we’ve heard from all these other companies, nothing like [a scooter corral] exists,” Walsh says. “Multiple cities have very little interaction with the actual city government to define how these should be deployed, and Pittsburgh has approached this in a completely different way.” 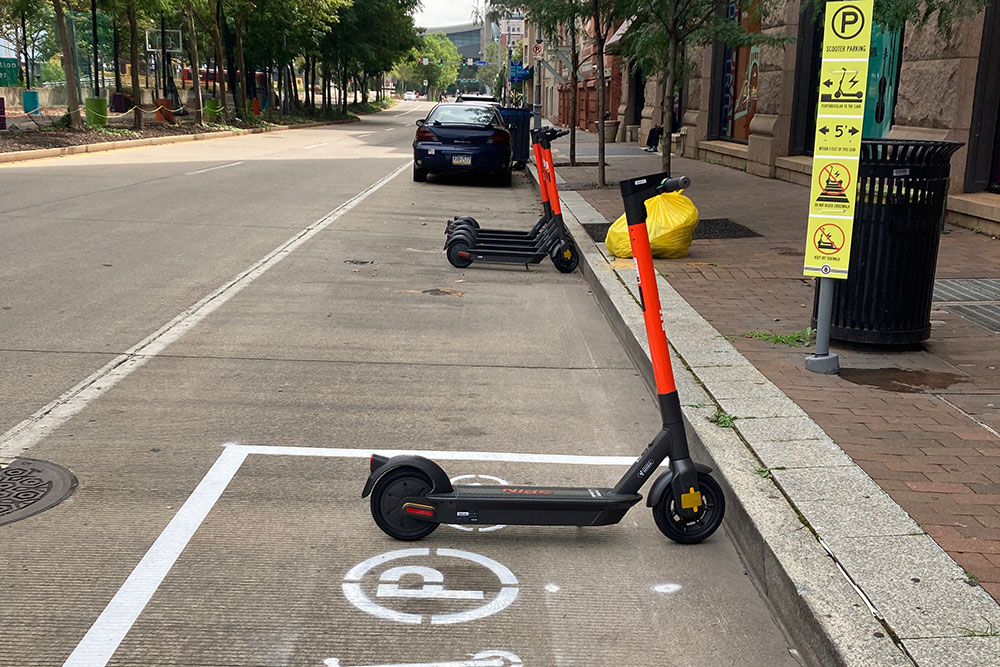 Aside from scooter corrals, the main place to park Spin Scooters is at one of the 16 “mobility hubs” already installed throughout the city. Specific locations for mobility hubs, which have been placed in neighborhoods ranging from the North Side to East Liberty, can be found on the Transit app. According to Walsh, each of these hubs will have charging stations for scooters, real-time transit info and will coordinate with other transportation services at nearby hubs.

In total, Move PGH plans to install at least 50 mobility hubs throughout the city, though doing so depends on several factors including zoning restrictions and community approval. While Walsh didn’t give a specific timeline for when additional hubs will be finished, she said 10 of them are currently in the final stages of completion.

Regardless of where the scooters end up in Pittsburgh, Spin, which is hiring a local workforce, will return them to mobility hubs at the end of each day to ensure they are charged and ready to go for the next day’s commuters.

“At the beginning of every day, all of the spaces where the mobility hubs are, are filled,” Walsh says. “So if you’re counting on one there, you can find it.”