Walk through the light, airy lobby of downtown’s new Fairmont Pittsburgh hotel, and you will feel rejuvenated. Take pleasure in the dramatic high ceilings, the streaming natural light and the cool, contemporary furnishings, including a wide, low copper fireplace, which creates a sleek, horizontal line of flame. Then ascend a grand marble staircase to arrive at Habitat, the hotel’s fine-dining restaurant.

If Habitat were a person, it would be an architect—educated, environmentally conscious and brimming with sleek design.

The mod restaurant specializes in transforming local ingredients into global cuisine. And save room for dessert because Habitat’s offerings are a real highlight.

To understand Habitat’s ethos, you need to understand the corporate-wide goals of Toronto-based Fairmont Hotels & Resorts: Providing sustainable tourism encompasses a myriad of initiatives, such as energy and water conservation, waste-management improvements and educational outreach to guests and the local community regarding environmental issues.

Consistent with Fairmont’s goals, Habitat’s commitment to “green” and “local” is truly impressive. In addition to various recycling and energy-saving practices, Habitat has made a commitment to sourcing ingredients that are, to the greatest extent possible, locally sourced within a 100-mile radius of the hotel, organic and sustainable. Although this may be common among smaller independent restaurants, in a hotel, it’s almost revolutionary. 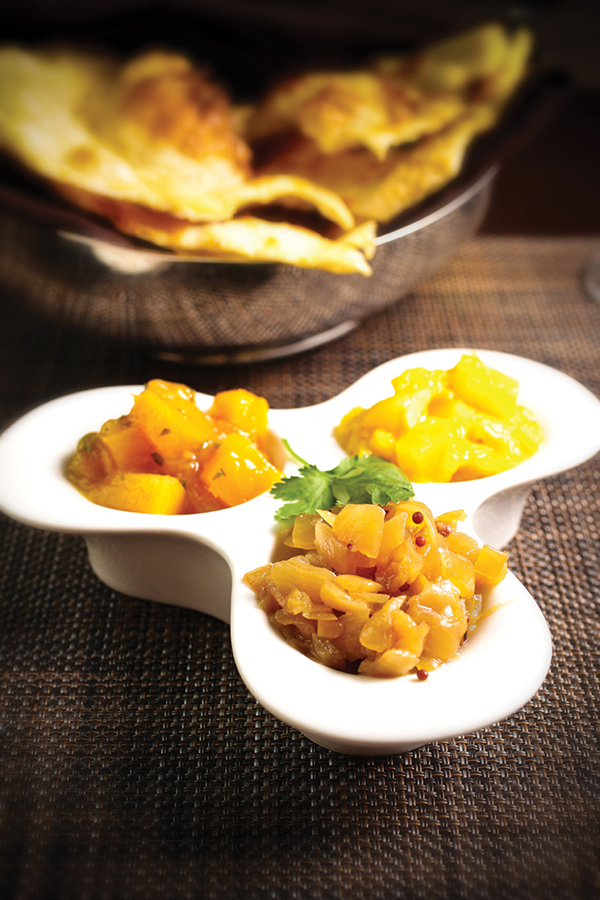 Achieving that standard of commitment takes a lot of flexibility as executive chef Andrew Morrison will attest. Unlike most hotels, which offer roughly the same menu day in and day out, the Fairmont must contend with the uncertainties related to the availability of ingredients. That drives Habitat’s menu, not the other way around.

Like the hotel in general, Habitat is designed with American recycled materials and furnishings. Across from the dynamic, open kitchen is a special tall table for 12, carved by Pittsburgh’s Tadao Arimoto; it’s available for common dining or private parties. The other tables, dark and polished, are set with bamboo placemats and bone-colored curvaceous dishware.

Mod colors—orange, brown and pale blue—constitute Habitat’s palette and can be seen on wall surfaces, carpet and furnishings. Even the servers’ attire—orange shirts, brown vests and pants and blue striped ties—complements the decor, and the space is bathed in light via tall glass windows.

A first glance at the dinner menu, with such categories as Small Plates, Wok, Tandoor, Sides, Larger Plates and Grill, tells you that the menu stretches from West to East. Helping make some of those choices as authentic as possible, Habitat’s kitchen features a large wok station and a tandoor oven, a cylindrical structure made of clay that can be heated as high as 900 degrees Farenheit; it’s typically used in the Middle East, India and other parts of Asia.

Although small, the menu is diverse, ranging from a simple steak to lobster lo mein to chicken tikka masala (chicken roasted in creamy, lightly spiced tomato sauce, a popular dish in England and India).

If you have any questions, the very capable and professional servers will help you navigate the menu.

Take advantage of the opportunity to eat fresh tandoor-baked naan bread, featured on the Small Plates menu and served with three very fresh—but not spicy—homemade chutneys, which rotate daily: a possible lineup is tomato, onion and banana-apple. Although the Indian-inspired dishes at Habitat are good, they’re under-spiced. That’s probably because this is a high-end hotel and not an Indian restaurant.

Two other great finds under Small Plates are the fresh tuna and avocado spring rolls ($12). At first glance, the dish seems simple enough as to risk blandness. Instead, these rolls offer a lightly fried wrapper filled with a delightful, velvety filling of tuna, avocado and ginger, and they’re served with a tasty sesame-chili dipping sauce. Also recommended is the yellow lentil broth ($9), which builds on a lentil base and curried broth with three or four littleneck clams and Portuguese sausage.

The Larger Plates are less memorable than the Small Plates. The Elysian Fields lamb ($28) features large chunks of high-quality lamb with a very nice tamarind and green-chili glaze—not the least bit spicy, but mellow and flavorful. The lamb seemed to have been coated with the glaze at the end of cooking and would have been better off braised in the sauce. 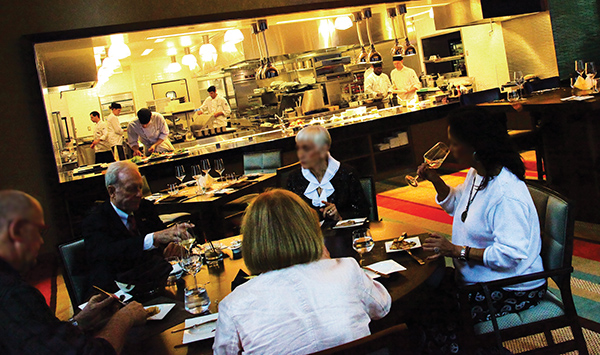 The popular miso-glazed salmon with baby bok choy ($24) provided a lovely piece of fish with a very sweet teriyaki glaze. It was pan-seared then baked and served with pickled shiitake mushrooms. On one visit, all the entrées were oversalted, but that’s an easy problem to fix.

You’ll find the dinner menu echoed in the lunch menu, but it’s generally lighter fare earlier in the day. A smart, business-friendly option is the Executive Express Lunch, which allows you to order a sampling of soup, sandwich, salad and dessert (low $20s) that arrives all at once without a long wait. An excellent lunch choice is the jumbo lump crab cake ($16). True to the way Pittsburghers like it, this dish comprises a loosely held mound of fresh white crab with a very mild and well-paired lemon Dijon sauce.

The desserts at Habitat are intensely flavorful, delicate, perfectly proportioned and cleanly plated. In fact, they are so outstanding that I’d go to Habitat just to eat dessert. Pastry chef Naomi Gallego hails from the Four Seasons in Austin, Texas, and, according to chef Morrison, is a passionate and talented chef who competes nationally in pastry competitions.

There’s the candied-lemon dessert ($7), a lemon-lover’s delight: a whole lemon rind poached in sugar for several days and filled with delightfully light layers of buttery cake, lemon-curd mousse and meringue. 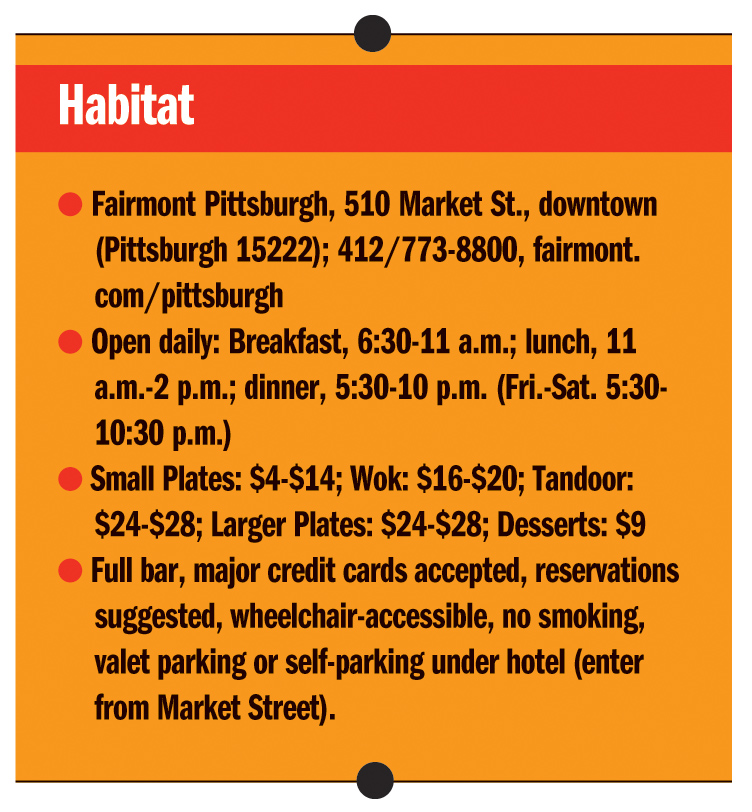 Habitat’s coffee comes from the nearby Nicholas Coffee, which was established in 1919 and is Pittsburgh’s oldest coffee roaster. The java is respectable, and the service is pleasing. A tiny complaint—the coffee cups are rectangular rather than round, making sipping challenging. The iced tea came with cane-sugar syrup, a nice touch.

The competence of Habitat reflects the stature and experience of chef Morrison, who, although raised in Cheshire, England, has 20 years of culinary experience in the United States. He’s worked in Los Angeles, Washington, D.C., New York, Seattle and Miami and, most recently, was executive sous chef at the five-diamond, five-star award-winning Four Seasons hotel in Atlanta. Morrison, who moved here with his family when he became executive chef at the Fairmont, already has great enthusiasm for Pittsburgh, citing a “great feel” and an appreciation for the museums, parks and amenities.

Isn’t it great to have a large hotel chain roll up its sleeves and show the care and attention needed to make its Pittsburgh hotel a true reflection of the city and its environment? Morrison and Habitat are welcome additions to our downtown culinary scene.

This article appears in the July 2010 issue of Pittsburgh Magazine.
Categories: Restaurant Reviews