The McKees Rocks music venue offers more options for concertgoers than most nearby halls. 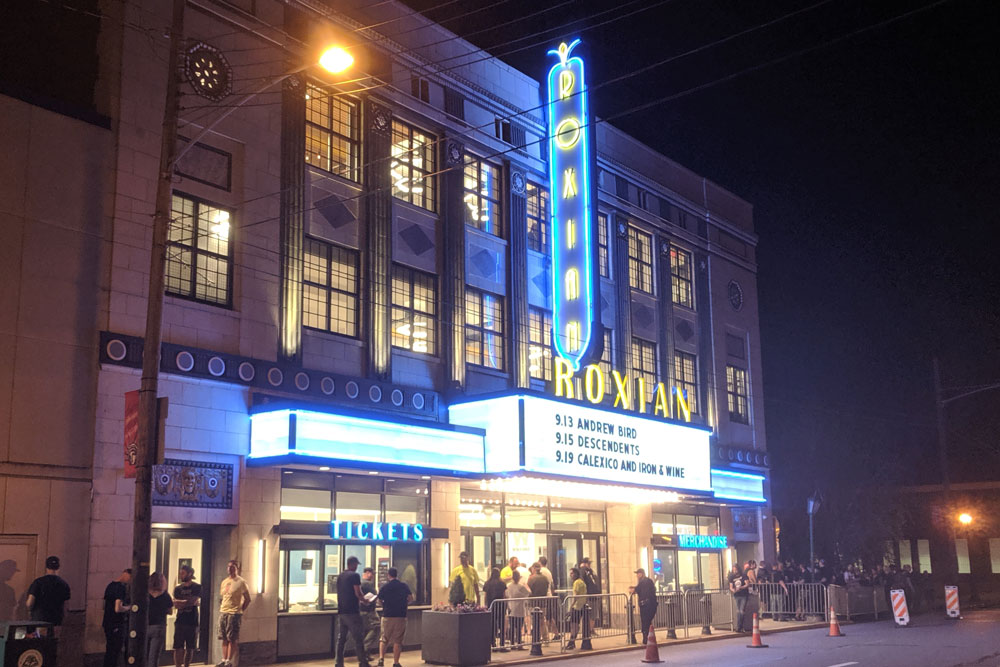 The Roxian Theater cuts an impressive figure, with a marquee that puts every other facade in (or around) town to shame.

Hints of art deco and ’80s flair shine into the night on Chartiers Avenue in McKees Rocks, fundamentally changing the tenor of the riverfront borough. It’s still the Rocks. But, even more than previous (notable) development along the main drag, the Roxian makes it a destination.

I visited the theater for the first time this Sunday night, taking in an incredibly rare local gig from punk godfathers Descendents. It was the first area stop by the massively influential outfit in more than 20 years; so sparse are their appearances that every other Pittsburgh venue they’ve played no longer exists (Metropol, the Electric Banana and I.C. Light Amphitheatre for a Warped Tour date).

Combine that rarity with Pittsburgh’s growing reputation as a repository for dedicated fans of old-school punk (that’s a post for another day), and this show easily sold out the Roxian’s 1,400-plus capacity. I walked into the venue wondering if that was simply too many people to leave room for a good time; I was pleasantly surprised that the well-designed venue is more than up to the task.

As soon as I was inside, everything was convenient and amenable. There are multiple outposts for water and beer throughout the building; I never waited for a drink. The place was undoubtedly packed, but I never felt crammed in without anywhere to go. And while the volume was perhaps a bit more skull-shaking than it needed to be, the sound quality was high.

As the band blasted through 37 songs in 80 minutes — which is only possible when some of your best-known songs are mere seconds long, such as the crowd-pleasing, 35-second “Coffee Mug” — I explored the three-tiered venue.

Other local halls have multiple seating levels; Stage AE’s indoor venue has luxury boxes and a small GA section on its second tier, and Mr. Smalls offers access to two balconies as a premium add-on. But the Roxian actually provides ample room and access to each tier, not just a few select seats. At the stage level, there’s a sizable pit for the diehard fans; behind that, a bar-style area on the same plane as the stage. One floor above, a sizable tier of seating not dissimilar from the upper level of the Byham. On a third tier, there’s another bar area with a selection of seating and standing area. (This offers the best view but also has the most limited capacity.)

The venue isn’t perfect; a low ceiling in the downstairs bar area makes for a cacophonous environment, where the music and the din of nearby conversations are both deafening. I arrived long after the worst of the security line, but I’d imagine it gets pretty unwieldy for those who’d like to get in right around door time (admittedly, this is a problem all around town as of late).

And a better parking solution is desperately needed. The website lists a lot behind the building as well as spaces at a former Eat’n Park down the street; both of those filled instantly, leading hundreds of cars worth of fans to invade a nearby supermarket parking lot and hope for the best. If the Roxian is going to let 1,400 people in, they should probably come up with at least half that many official, sanctioned parking spaces. For now: Uber in and out.

Those quibbles aside, however, it’s a generally excellent addition to the landscape — one that is rapidly becoming an embarrassment of riches. There are high-quality venues I genuinely enjoy visiting in Millvale, McKees Rocks and on the North Shore. There are far more concerts I’d like to attend than I possibly have time for.

If we built a zipline to and from Star Lake, things would be perfect.