This successful, people-pleasing Italian restaurant in Shadyside, friendly and flavorful, won't rest on its laurels (or sunflowers).

Just a few months after Girasole celebrated its 10th anniversary in April, readers of Pittsburgh magazine voted it the No. 1 Italian (non-chain) restaurant in the region. What better time than now to investigate the secrets to Girasole’s success and to learn what’s planned for the future?

This small restaurant off Shadyside’s Walnut Street offers hearty food in a friendly, upbeat setting. Girasole means "sunflower" in Italian, and it’s also close to the surname of the restaurant’s owners, who are at the core of the success of their enterprise. Their constant presence, care and welcoming personalities make customers feel at home.

At almost any time of day, you will be greeted and seated by owner Jimmy Gerasole, who opened the restaurant in 2000 with his wife, Patti.  Although he had a background in retail, Jimmy always wanted to open a restaurant.  In 2000, son Gino, who worked at Viaggio Restaurant at the time, found the restaurant’s Shadyside space for his parents; he then encouraged them to open the restaurant and came on board as a manager.  Gino’s wife, Jennifer, joined them as Girasole’s opening chef and continues as executive chef to this day. Jimmy and Patti’s other son, Vito, is also an integral part of the restaurant as director of wines, floor manager and a server; he is joined by his wife, Vicki, who occasionally helps out as a server.

Wine and nonalcoholic drinks, major credit cards accepted, no reservations (call to get on waiting list), not wheelchair-accessible, no smoking, street parking.

Patti gives special credit to daughter-in-law Jennifer Gerasole: "We think the world of her, and we’re lucky to have her both as a daughter-in-law and as our executive chef; she is a very talented chef." Jennifer, a graduate of the former Pennsylvania Institute of Culinary Arts (now Le Cordon Bleu Institute of Culinary Arts in Pittsburgh) establishes the menu and oversees food service and catering. In turn, she credits Chris Corimski, an International Culinary Academy (now also merged into Le Cordon Bleu) graduate who has worked at Girasole for 10 years, with the quality of the day-to-day cooking. Corimski, who has worked in many Pittsburgh restaurants—among them are Casbah and the now-defunct Le Perroquet—reiterates that it is the consistent quality of the food that keeps customers coming back for more. Patti also gives credit to other "wonderful" longtime employees who work hard to meet the needs of customers.

In addition to family, a second key component to Girasole’s success is that the restaurant serves plentiful portions of simple food that tastes good. Currently, the dinner menu is divided into primi (first course), pasta and risotto.  In addition, there is one daily special from each of these categories: pollo, pesce and carne. The base menu changes four times a year according to the season.

Upon first glance, the prices might seem high for casual dining, but, in truth, the portions are so large that you are paying for two meals—the one you eat at the restaurant and the leftover meal you take home.

A wine list, which features exclusive Italian wines, accompanies the food selections. They’re available by the glass (about three reds and three whites ranging from $8.75 to $10 per glass) or by the bottle (about 25 choices widely ranging from $26 to $250).

Located on Copeland Street in a below-ground space that feels like a grotto, Girasole features an interior of stone walls, wooden accents, copper-topped tables, dried sunflowers and paintings of mostly Italian scenes. During warm months, outdoor seating is available on the front patio.

The atmosphere here is usually bustling, loud and often crowded. A word of advice: Although the restaurant does not take reservations, you may call ahead to put your name on a wait list; that’s a wise move for peak hours.

Servers squeeze between the tables, delivering large plates of food generated in a surprisingly small kitchen in the back of the restaurant. Service is quick and attentive, although on two visits, new courses were served before the plates from the previous course were cleared. As in many restaurants, the service is more competent when the restaurant is less crowded. 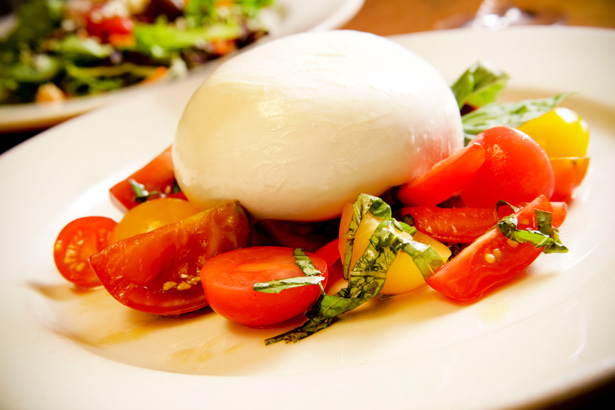 A standout appetizer (available seasonally) is the burrata ($9.95), which stars fresh mozzarella cheese made with cream. The outside is firm, but the inside is creamy and almost liquid like a melted brie. A delicious assortment of baby heirloom tomatoes nicely tossed in simple olive-oil vinaigrette complements the burrata.

Each table is provided with a basket of good-quality Breadworks Italian bread, which is accompanied by butter packets and an olive-oil and balsamic-vinegar carafe.

One of Girasole’s most popular dishes for lunch and dinner is the excellent house salad. It’s built on a heap of mixed greens, which are topped with cherry tomatoes, shredded carrots, shaved red onions, Kalamata olives, garbanzo beans, gorgonzola and, of course, sunflower seeds. All ingredients are tossed in the right amount of tangy homemade vinaigrette. Add grilled chicken or sautéd shrimp for a complete, healthful meal.

The pasta dishes, which come in large portions, are flavorful and sometimes very rich. The decadent spinach and ricotta ravioli ($15.95) features large, thick-skinned ravioli filled with ricotta and a minimal hint of spinach; it’s topped with a very rich cream sauce punctuated by chunks of tomato.

A disappointing dish is the torcia, a torch-shaped pasta in a white-wine sauce with rapini, fennel, white beans and miniature meatballs ($17.95). The ingredients are promising, but the dish is more pasta than toppings, and the torcia are soggy from the broth.

The potato gnocchi ($14.95) in marinara sauce is respectable. Both the gnocchi and marinara sauce are a bit run-of-the-mill, but the dish is enhanced by small pieces of fresh mozzarella. The parmesan grated on top by servers at the table adds a nice touch.

In the fall menu, the most popular pasta is the pumpkin ravioli ($17.95) in sage-cream sauce; customers start calling in August in anticipation of its arrival. This dish was not on the menu when I dined, but it’s definitely something to try.

For non-pasta dishes, choose among the daily chicken, seafood or meat specials. Girasole has a flair with chicken, frequently offering specials ($20 range) that consist of a sautéd chicken breast combined with any number of Mediterranean ingredients such as pasta, feta or greens.

Daily seafood offerings tend to veer away from traditional Italian fare but often with success. One sea-scallop special ($23.95) features six large, perfectly cooked sautéd scallops on a bed of broccoli, pine nuts and red peppers—a light and colorful dish with a nice contrast of flavors and textures. Unfortunately, I was unable to catch chef Corimski’s popular signature meat special, osso bucco served alongside traditional risotto with saffron and basil-lemon gremolata—available the last weekend of every month.

Several people inside and outside of the restaurant staff make the homemade desserts. The Italian rum cake is the best dessert that I sampled; although, it does not in any way resemble a traditional Italian rum cake (a layer cake soaked with rum). It’s a piece of buttery bundt cake with caramelized-nut topping sitting on a pool of a little too-thick crème anglaise.

Similarly good is the coconut cake, consisting of a large piece of white cake filled with coconut pastry crème and crowned with whipped topping and coconut. The tiramisù is the weakest dessert I tried—it was soaking wet. It’s just as well: You may already be too full for dessert.

What’s next for Girasole? The family plans to capitalize on the food’s popularity by offering catering services; they’ve already started catering weddings and other events-miraculously doing so out of the existing tiny restaurant kitchen. The Gerasoles intend to add a catering kitchen at a separate location to pursue this new line of business.

This article appears in the September 2010 issue of Pittsburgh Magazine.
Categories: From the Magazine, Restaurant Reviews