For this Swimmer, the Sky is the Limit

Duquesne senior Madelyn Hoying has already competed as an elite swimmer and founded a nonprofit. Her next step may be straight up. 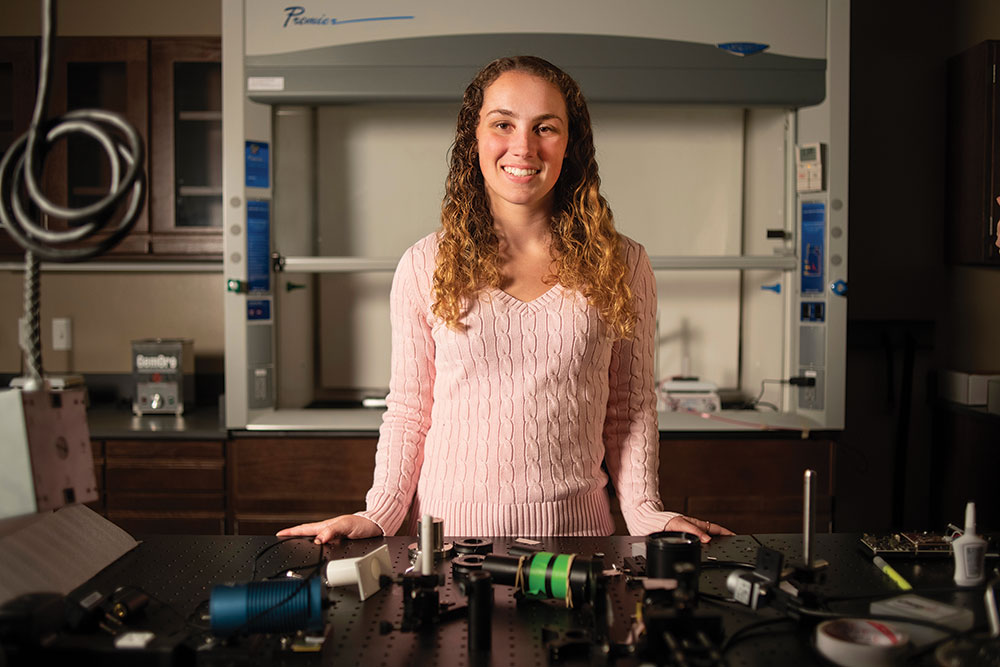 Madelyn Hoying has not yet earned her undergraduate degree, yet her resume already includes a double major and roles as a Division I swimmer and CEO of a nonprofit. With that kind of success, where did she turn for an internship?

A senior at Duquesne University, Hoying is studying biomedical engineering and physics — and she has her sights set firmly on the stars.

“I want to be an astronaut,” Hoying says.

She came to college to do medical research; her grandmother had pancreatic cancer, and Hoying wanted to help discover and develop new treatments. But as she studied, she fell in love with physics.

“That, then, kind of spirals into working with NASA and getting interested in space,” she says.

Hoying spent the spring semester of her sophomore year at NASA’s Langley Research Center in Virginia working in laser science.

“I was developing a solid-state laser to do remote sensing,” Hoying says. “The application of it would be … to see what the different compositions are of things that are far away in space.”

Hoying says a lot of people ask how swimming factors into her pursuits — if that time would be better spent focusing on research instead of a competitive sport. But Hoying says the sport is a great way to prepare for the rigors of astronaut training.

“It’s the closest you can get to no gravity on Earth. Clearly, I know how to control my movements in that kind of environment,” she says. “[Swimming] also helps with the athletic requirements that come with it, because to be an astronaut, you have to be very healthy and fit.”

Besides, she says, “Astronauts train underwater. A lot of their training on Earth is done in a big pool.”

In addition to training as a swimmer and keeping up with research, Hoying is also the founder and CEO of FosterRec, a nonprofit that helps foster children get involved in athletics in her home state of Michigan. The organization, which Hoying founded alongside other Duquesne student athletes, began in 2017 and gained official nonprofit status last spring.

“My family is a foster family in Detroit. I wanted to make sure that the kids that we have in our foster home can still get all of these opportunities that I’ve gotten and have access to them,” she says. “The state doesn’t necessarily fund extracurriculars, so we’re looking to get sponsorships to get those kids involved in athletics.”

The benefits of sports, Hoying says, are vital for kids growing up in foster settings. “I know the team-building skills, the character development, discipline, everything — they’re so important for success later in life.”