A new exhibit, "Gathered Locally", showcases the vast amount of talent in Pittsburgh. 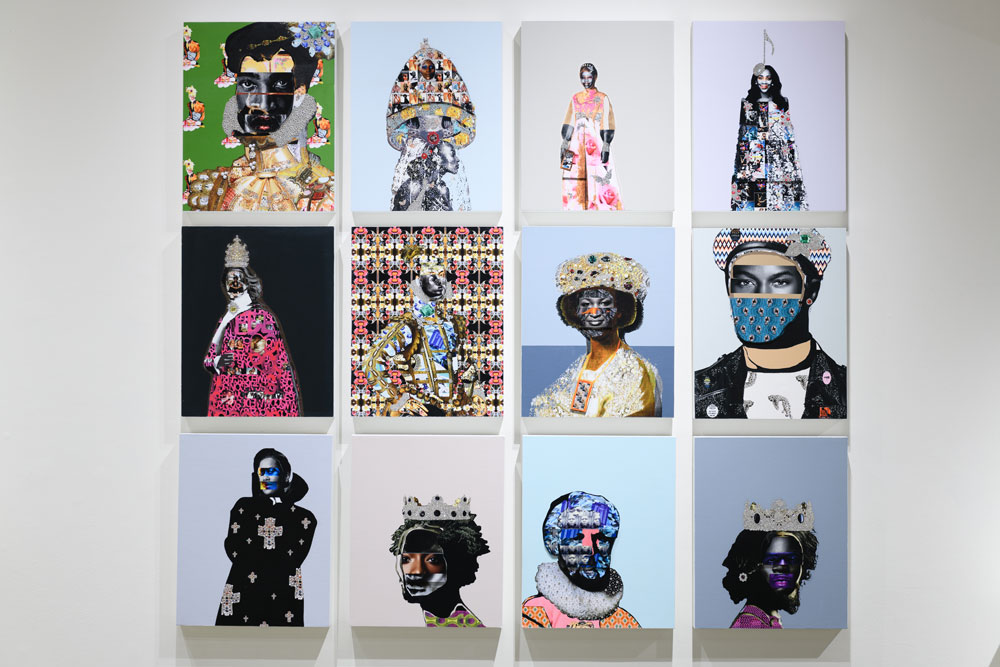 When Kathleen Mulcahy and Ron Desmett began meeting with investors to fund their idea for the Pittsburgh Glass Center, people often asked them: “But who will come?”

As it turns out, hundreds of thousands.

Since its inception 20 years ago, the Pittsburgh Glass Center in Friendship has attracted 50 artists to live in Pittsburgh and work in glass and more than 100 artists-in-residence to teach in the studios — as well as more than 375,000 visitors who have viewed exhibitions, taken classes or workshops or rented the studios and equipment.

“I told them, I literally said: ‘If we build it, they will come,’” says Mulcahy.

“I look now and I think, I’ve met so many people just on the street, anywhere, who have been to the glass center, who have taken a class there or watched a demonstration, been to the openings — it’s touched everybody.” 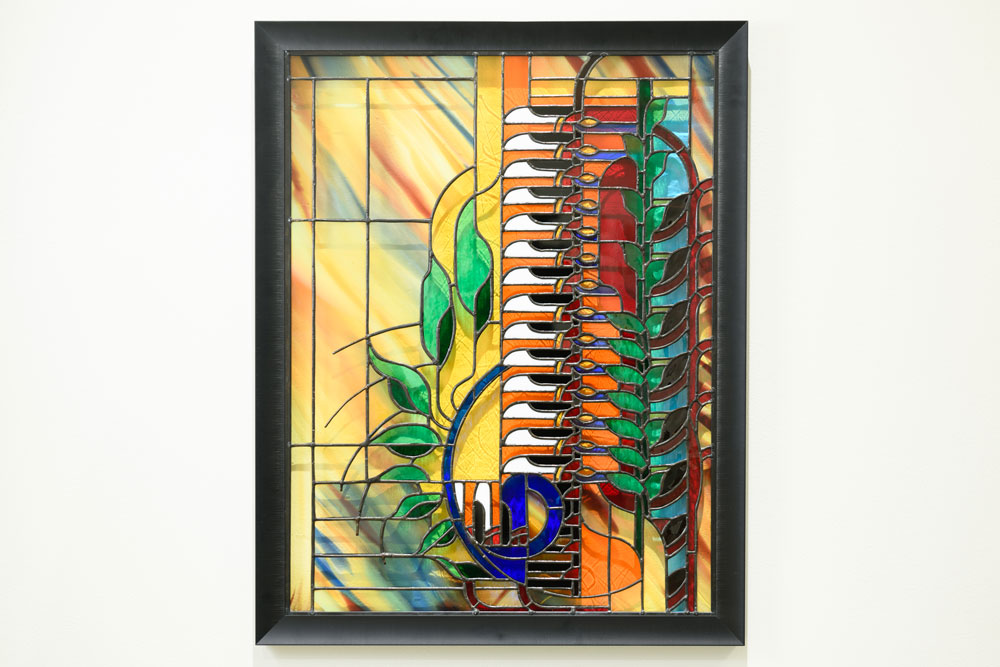 “THE INSTRUMENT” BY ROCKY KINDELBERGER

Those artists who have moved to Pittsburgh to work here, who work on staff at the glass center or have simply taken classes there are featured in “Gathered Locally,” a show with about 70 pieces in mediums from photography to jewelry to sculpture.

“The range of technique and the level of virtuosity in a number of the pieces are amazing,” says Mulcahy, who has a piece of her own, “Anna’s Wheel”, in the show.

Other featured artists include Guyana-born Gavin Benjamin, a board member at the center whose piece, “Heads of State,” incorporates photography and appropriated images.

“Untitled Chandelier” by Dan Buchanan, who came to Pittsburgh after being displaced from New Orleans when Hurricane Katrina hit, features scenes of steelworkers surrounding the lightbulbs. 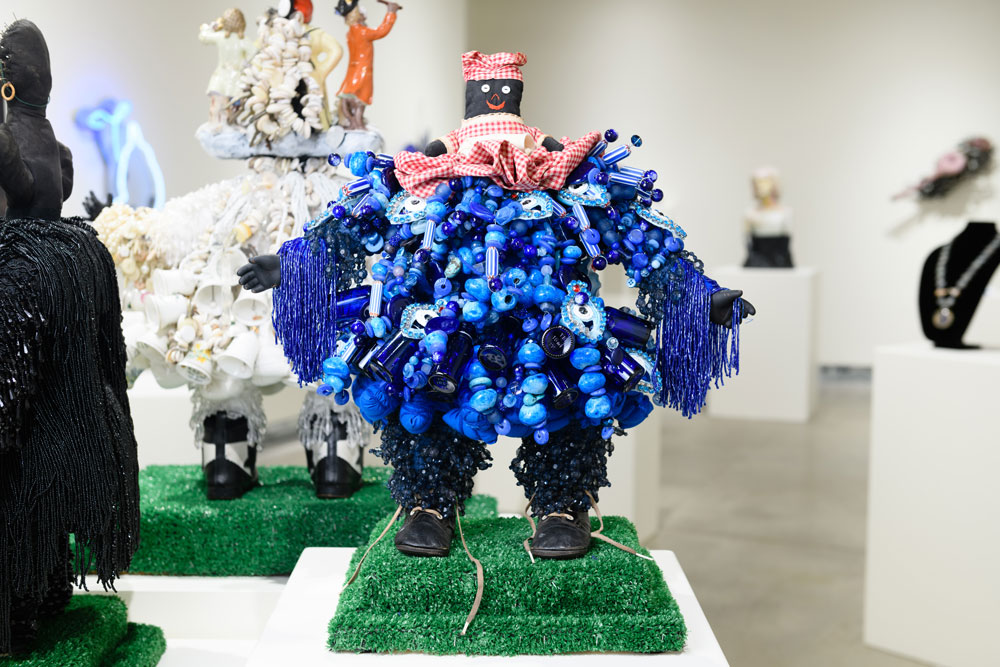 “RED, WHITE AND BLUE AND (BLACK) OR, THE BLUEST SIGH” BY VANESSA GERMAN

Heather McElwee, the Randi & L. Van V. Dauler Jr. Executive Director of Pittsburgh Glass Center, says rather than selecting and curating pieces for the show, they allowed artists who have worked at the glass center in some capacity to submit their own choices.

The result is a great variety, she says.

“All of this represents all of the things you can do,” she says.

Mulcahy, who came to Pittsburgh in 1976 to teach at Carnegie Mellon University, where she connected with Desmett, an MFA student at the time, says their goal was to bring talent here and retain talent that was already here.

“When I first started talking about the glass center and what it could be for the city, I looked around, and there weren’t other quality organizations where artists could go,” she says.

“So I think that kind of stuck in the back of my mind as I was teaching, that we gather them here, they come to a great university, but where do they go? What do we have for them here? How can we keep that talent here?” 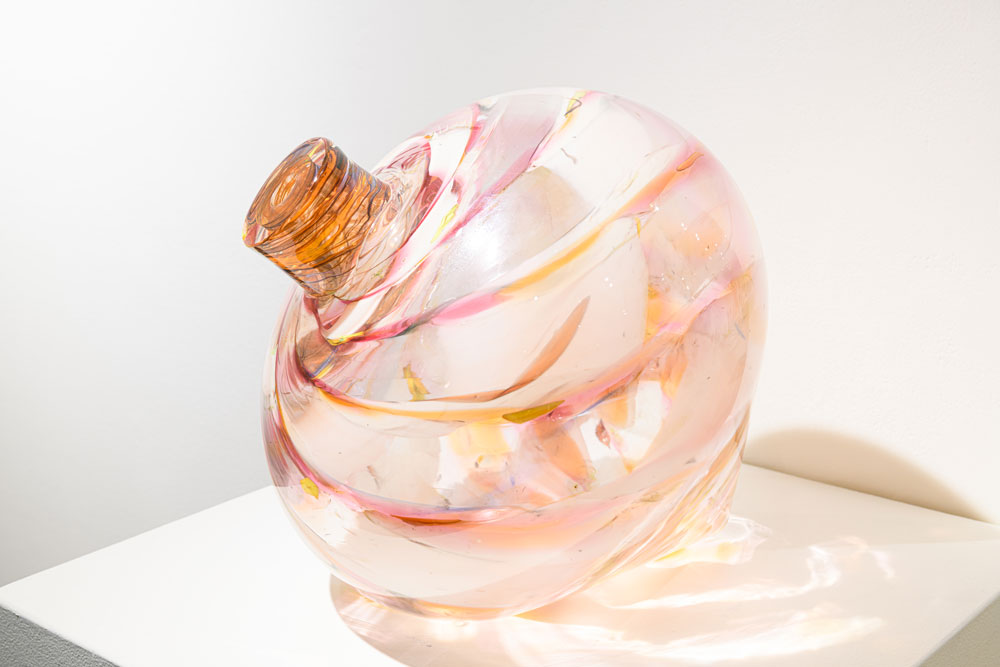 Mulcahy says the center likely ranks among the top four glass centers in the country alongside Pilchuck Glass School in Washington state, the Corning Museum of Glass in Corning, N.Y., and UrbanGlass in New York City.

“When you look at excellent schools and professional access all year long, I think the glass center is right up there,” she says.

“I remember so many people apologizing for Pittsburgh, that it just couldn’t happen here, and I thought, why? Because I came here and right from the beginning I thought it was such a beautiful city and a great place to make art.” 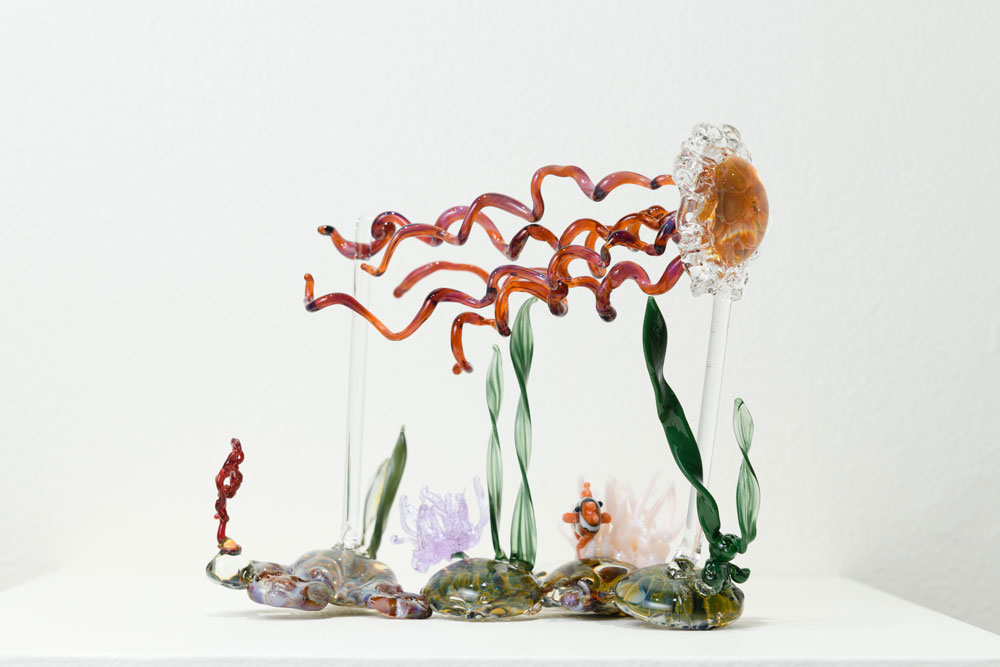 This article appears in the December 2021 issue of Pittsburgh Magazine.
Categories: Arts & Entertainment, Things To Do