Forty chimes have been installed in the new Tower of Voices, that stands sentry over the park’s entrance. 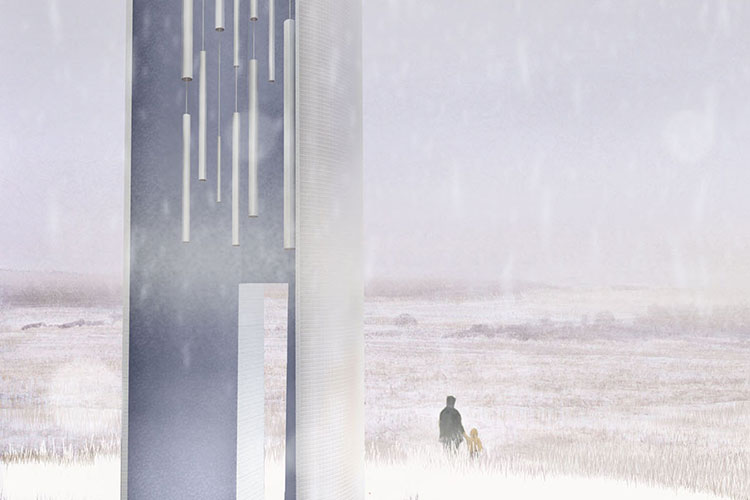 Officially, the Flight 93 National Memorial in Stonycreek Township is a National Park; signs referencing the Department of the Interior flank the entrances, and uniformed park rangers are on hand to guide guests. In practice, however, the 2,200-acre territory is a multifaceted tribute to the 33 passengers and seven crew members who died on Sept. 11, 2001, following a courageous attempt to reclaim control of the plane from its hijackers.

Forty marble panels comprise the Wall of Names, each inscribed with the name of a single person. Forty groves in the heart of the memorial contain 40 trees each. And, as of this month, 40 chimes have been installed in the new Tower of Voices, a dramatic and memorable monument that stands sentry over the park’s entrance.

“It’s the memory of these people, through these ephemeral voices from the chimes, activated by the wind,” says architect Paul Murdoch; his firm’s design was chosen from more than 1,000 concepts to design the memorial. “I think it’s meant to be a very personal and intimate experience.”

Each chime on the 10-story tower, which will be dedicated in a ceremony on Sept. 9, produces a slightly different tone. As wind passes through, an ever-changing soundscape can be heard; the effect is particularly dramatic when standing within the tower itself.

“A lot of the last memories of the passengers and the crew members were through their voices on phone calls, before the crash,” Murdoch says. “We thought we wanted to do something in the memorial with sound.

“We hope that it’s a place of reflection, a contemplative sort of place — listening to these chimes and the changes that they’re making.”