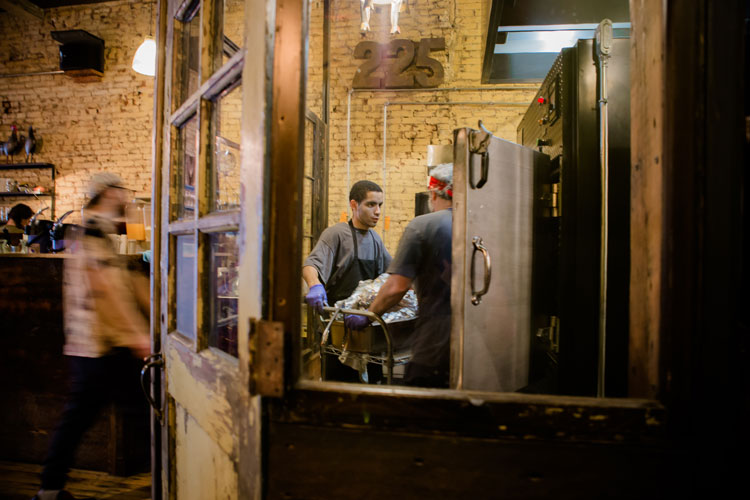 Since reopening earlier this year in Lawrenceville, SMOKE barbeque taqueria has emerged as a go-to restaurant for locals seeking flavorful food at a decent price.

When Nelda Carranco and Jeff Petruso moved SMOKE from Homestead to a bigger space in Lawrenceville this year, they expanded the menu and added ample seating. In the process, the couple metamorphosed their popular eatery from a chill lunch counter into a restaurant. And it’s a very good restaurant, too. 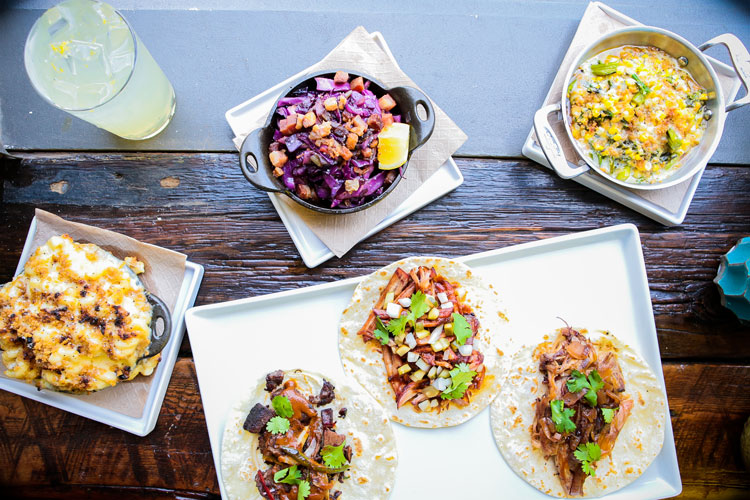 Tacos dominate the menu. Neither traditional nor chef-driven, the flavors largely are reflective of the American Southwest or competition-worthy barbecue. They’re served wrapped in aluminum foil as if you might want to hustle them over to a nearby bar. You could, of course, get them to go, but the farmhouse-meets-factory wood, brick-and-metal décor, a best-in-town soundtrack of classic rock and ’90s hip-hop and a lively, if sometimes loud, atmosphere are enough to make me want to stick around and eat them here.

Many of my favorite tacos (brisket, pork, ribs) begin with meat smoked overnight in a gorgeous Oyler Pit. Of all of the new additions to the Lawrenceville location, the smoker is the grandest and most important. I often find myself opening the tacos and pulling out the best bites of meat, wishing that Carranco and Petruso would serve the proteins as standalone plates. 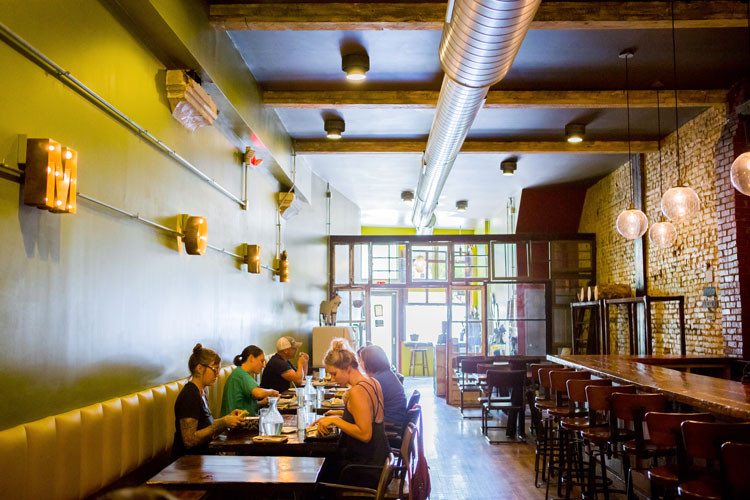 “Migas,” my favorite non-smoked item, is filled with soft eggs, fried tortilla bits, roasted red peppers and onions. “Eggs” is breakfast wrapped in a tortilla; the crispy potato bits add just the right amount of crunch, starch and salt, and you’ll rethink French fries’ status as an ideal tuber sandwich filling (potato chips still are the best, though). I’d love to see the deconstructed falafel taco special I had on one visit on the regular menu. The crunch and spice of the falafel, mingled with acidic roasted cherry tomatoes, made for a terrific, if untraditional, taco.

“Chicken and apple” tasted like a taco designed for people who are scared of tacos. There is too much cheese sauce and not nearly enough spice or acidity. It’s the only taco on the menu I hope will disappear. 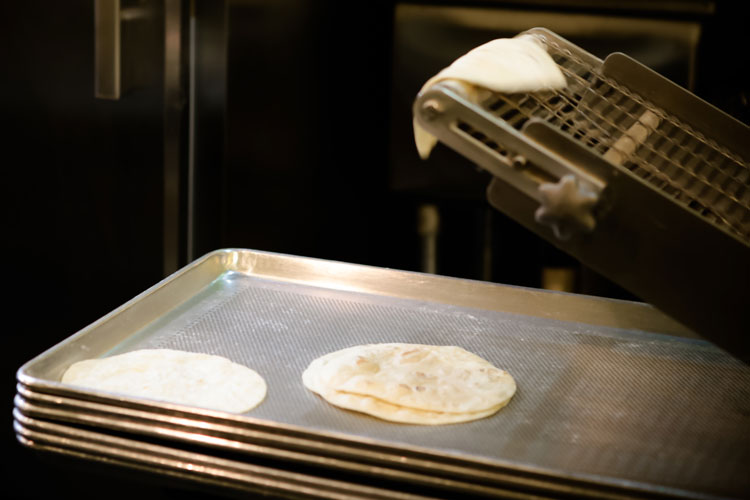 SMOKE’s tacos are served in flour tortillas made in a continuous cycle throughout the day on a new tortilla press. I’d eat them next to just about any non-lard-based flour tortilla I’ve had. Even better are the housemade corn tortillas; they’re not listed on the menu, and the kitchen notes that they’re available only in limited quantities (call ahead if you really want them), but they are too good not to mention. When you unwrap the foil, sweet puffs of maize brush your face with a corn-scented pillow. The tortilla’s deep corn flavor is beautiful. 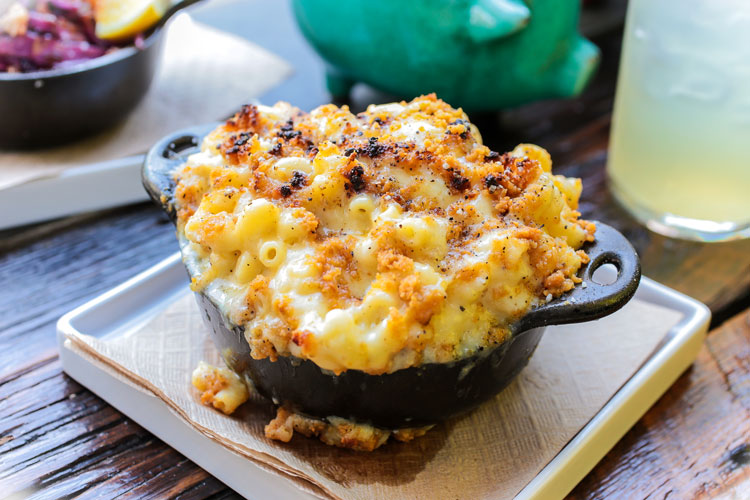 There are a few side dishes worthy of attention. The mac ’n’ cheese is crispy-topped and not too fussy. One friend said, “Make me stop eating this.” Beans, both black and pinto, are quite satisfying. The blue-cheese coleslaw is overpowering alone but works perfectly as a foil for the spiciest tacos, such as the chorizo.

Wednesday once was wing night. SMOKE’s killer wing sauce combines sweet, vinegar, fruit and red-hot flavors. If the smoked and then fried wings were crispier — they drift toward soggy — they’d quickly be new contenders in the fierce debate about the top wings in Pittsburgh. My friends and I savored the few crispy bits we could find; honestly, I wanted to keep them all to myself, but it’s said that sharing is caring, right? 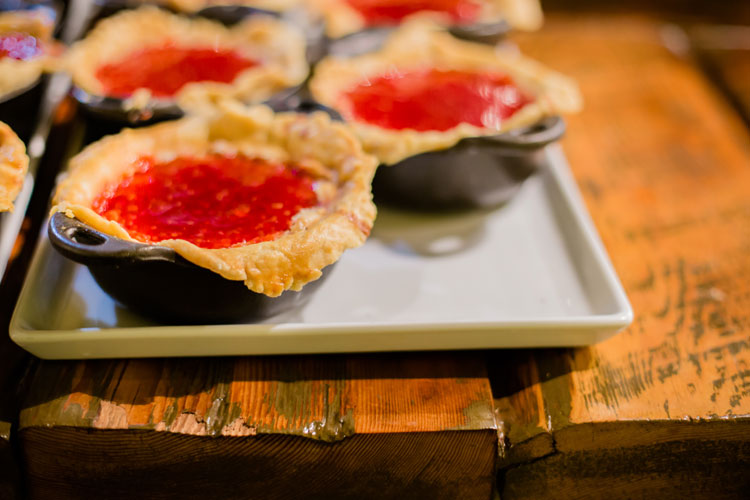 When I reviewed SMOKE, it was BYOB, but with Atlas Bottle Works next door, it’s easy to grab a few beers for the table. Horchata, a cinnamon-infused rice-milk drink with a lively lime-zest accent, is my favorite housemade drink, though it sometimes is a little thinner than horchata should be. Lemonade, also made in-house, is perfectly acidic with classic flavor.

Carranco and Petruso still need to work out a few serious kinks. Although I reject the “Dude, they should really be faster because all they are doing is making tacos” sentiment that I’ve heard, SMOKE would be better if everything moved a little faster. They’ve made some big improvements in pacing, but one weekday lunch visit took 75 minutes from start to finish, and that’s too long for many people’s lunch hours. 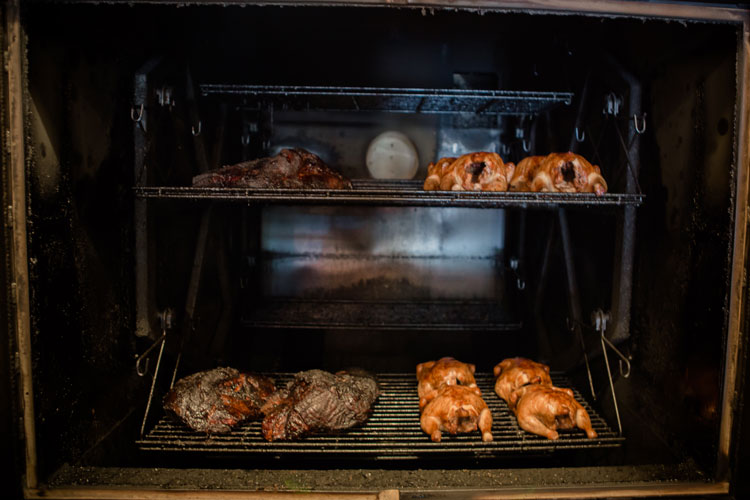 I like the casual, friendly service at SMOKE, but sometimes it feels as if some staff gets lost in a fog of mellowness. On several visits, at least one ordered item was forgotten. On one visit, I requested corn tortillas, but I received flour. On another, the hostess incorrectly entered my phone number into the NoWait app that’s meant to alert you via text message when your table is ready. SMOKE only uses the app to seat patrons once they’ve arrived and put their names on the wait-list. It’s a good thing my friend and I came back an hour later to check in, or we wouldn’t have eaten.

Even though dining at SMOKE occasionally can be frustrating, a strong kitchen, reasonable prices and a lively atmosphere make the new location one of my favorite go-to restaurants in Pittsburgh. It should be one of yours, too. 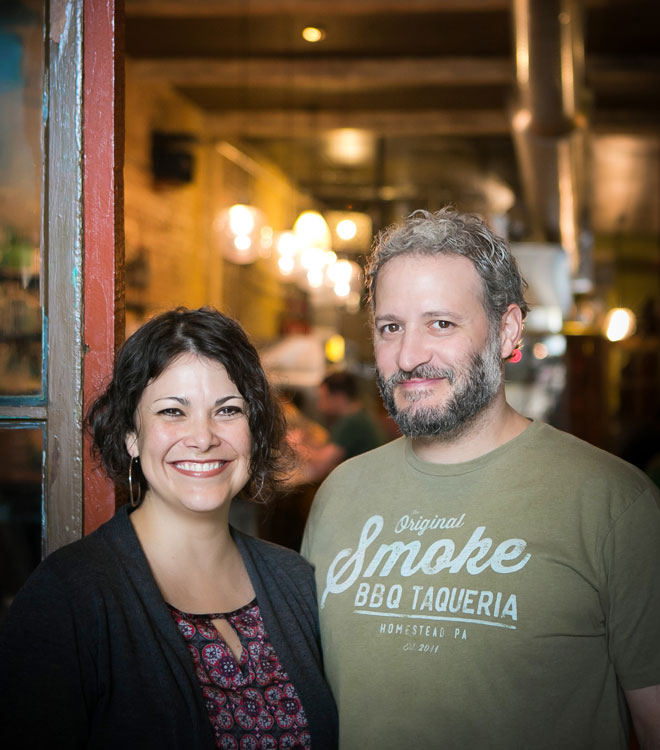 What prompted the move from the old location to the new one?   JEFF: The kitchen was really tight. We couldn’t do everything we wanted to do in it.   NELDA: We wanted to grow. We needed a tortilla machine to keep up with demand. It was too slow to press them all out by hand.   JEFF: It’s much faster now. We can make 800 to 1,200 tortillas a day here if we want to. But we also didn’t want to get too big. It’s about 50 seats in here. We could have crammed a few more in, but we didn’t want to get too big that we’d lose attention to detail about the little things.

What advantages do you have in the bigger space?   JEFF: We used to do everything from one station. Now there’s a flow to it. There’s a division of labor that we didn’t have at the other place. Our fryer in Homestead was a cast-iron skillet; now we have an actual frying station.

How does recipe development work for you?   NELDA: We bounce ideas off of each other, but as far as execution goes, that’s all Jeff.  JEFF: It’s what we like to eat. I love pastrami, so a few weeks back, I decided to make a pastrami special. There’s not any single thing that inspires a new recipe; it usually comes from something good that I’ve eaten recently.

Do you find liberty in recipe development because you’re not adhering to a traditional taco style?
JEFF: Right, we’re not trying to be a Mexican restaurant or a BBQ joint. Our name has the word Smoke in it, so we do try to make sure that one element of every taco has some smoke component in it. Primarily it’s the meat, but it could be sauce or a different component, too.

You’re not afraid of heat. I feel as if it’s almost an additional seasoning.   JEFF: It’s not inherently hot just to be hot. We love having the flavor of chilies in there. It’s all for flavor. We can tone things up or down.

How do you decide what music you’re playing?
JEFF: It’s just like the tacos; we play what we like. We talk about it every day. Sometimes there’s even arguments between the front and the back. For example, [back-of-house] will have on something mellow, but it’s too weird a vibe for upfront, so we’ll change it. I do have one rule: No Phil Collins. —HBK

This article appears in the August 2015 issue of Pittsburgh Magazine.
Categories: From the Magazine, Hot Reads, Restaurant Reviews