Kevin Sousa's Braddock restaurant finally is open. So how is it? 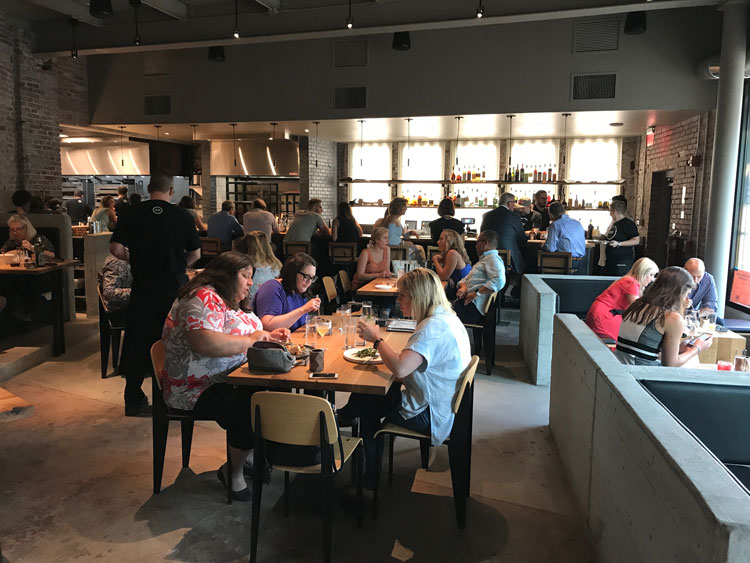 photos by hal b. Klein

Kevin Sousa changed Pittsburgh’s restaurant landscape when he opened the forward-thinking, buzzy Salt of the Earth restaurant in Garfield in 2010. Several years, and a couple of less-successful restaurants later, Sousa vaulted to national prominence by shattering a Kickstarter record — in January 2014, with the help of 2,026 backers, he raised $310,225 to fund the construction of an ambitious project in Braddock called Superior Motors.

And then everything went wrong. Construction of the space was going to take much longer — and be significantly more expensive — than anticipated. Questions were raised about Sousa’s past money management practices. There were delays. And more delays. Lack of investors. Radio silence. “Will Superior Motors ever open?” and “I’m sure that will happen as soon as Superior Motors does” became a punchline to a cautionary tale.

"I understand why we were under a magnifying glass,” Sousa says. "We did a Kickstarter campaign that was really successful. And there was a period of over a year where nothing happened at all. There are going to be people who want to think that worst. And they're entitled to do that, especially with something that's so public."

Sousa put his head down and kept working. He found an angel investor named Gregg Kander who helped with the financials. On July 16, the answer to “Will Superior Motors ever open?” finally was … “Yes. It’s open.”

It’s off to a strong start. And it’s a lot of fun to eat there. 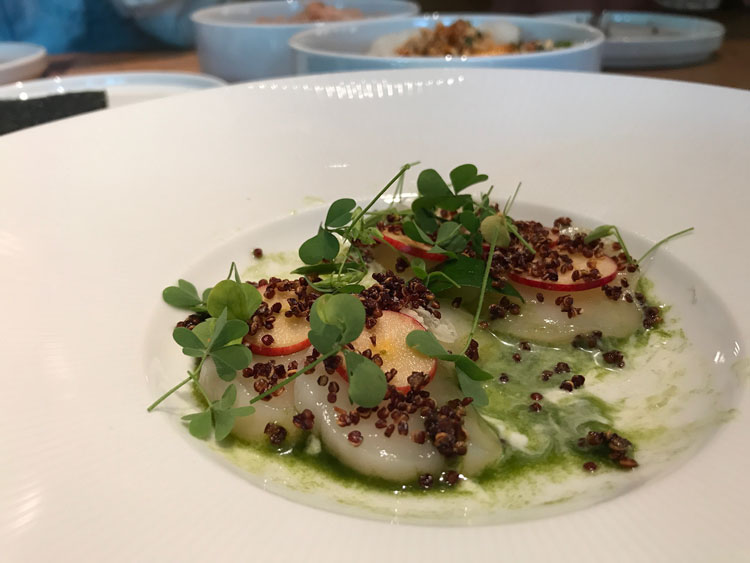 My first impression was that — aesthetics aside — I was dining in Salt 2.0. But I think it’s more like this: If Salt was Sousa’s “Sense and Sensibility,” this is his “Pride and Prejudice.” It’s written in the same voice, but the characters are more compelling.

Sousa frames his Superior Motors menu in a fashion that’s similar to what he did at Salt. The primary component of the dish — most often a protein —  is presented in bold caps [BEEF] with other elements listed underneath [chanterelle, corn, goat cheese, chard]. Here, it’s presented on a menu and not a chalkboard. That’s nice.

Though there still are well-placed bubbles of foam, Sousa is relying less on Modernist technique as a primary method and instead incorporating the best of what he did at Salt with more straightforward forms of preparation. His exploration of Japanese cookery — particularly his use of koji fermentation —  is something to watch in the forthcoming months.

The thing I appreciated most about the opening menu is how Sousa’s play on textures improves every dish. His mix of snappy, crunchy, chewy, soft and gelatinous components enhances each bite in a way that is functional and not overbearing.

“Scallop,” with its layers of flavor, is a fine example of how this works. Soft, sweet scallops sit in grassy, slightly citrus sauce of sorrel and creme fraiche. They’re topped by crisp, tart crabapple and crunchy, malty puffed quinoa. It's pretty perfect. 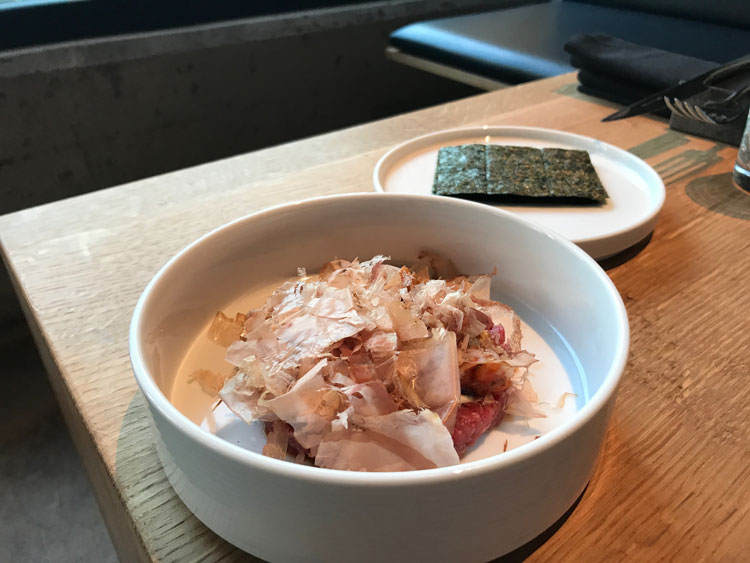 Beef tartare emerges with flakes of bonito dancing like ocean waves. Diners are instructed to spoon portions of hand-chopped, sesame- and miso-enhanced beef into sheets of nori. It’s a fun and satisfying way to start a meal. "I'd come back for this a million times,” a friend said.

Other dishes on Sousa’s mostly successful opening menu come close to hitting the mark but feel like they need a hair more precision in execution. “Duck,” for example, had a too-too chewy breast and flabby skin resting on a combination of lentils, toasted buckwheat and kohlrabi. The dish felt a bit out-of-season at a restaurant that, without hammering diners over their heads with eggplants, primarily will stick to what we should be eating at a particular time of the year.

Sousa is taking his sourcing seriously. Produce comes from down the block at Braddock Farms, meat from Pittsburgh Highlander Farm and Lamppost Farm, and he's also employed an in-house forager/larder.

One of Sousa’s strengths at Salt was hiring a terrific support team (a list of Salt alums also could read like the roster of a Pittsburgh restaurant renaissance all-star team), and he’s done it again at Superior Motors. Chris Clark flew under the radar as the general manager of Mezzo at Sienna Mercato but brings years experience running front-of-house at WD50 in Manhattan. It shows. Aside from a couple of “we’ve been doing this for less than a week” hiccups, Clark’s opening team handles their work in a way that feels confident, friendly and efficient. 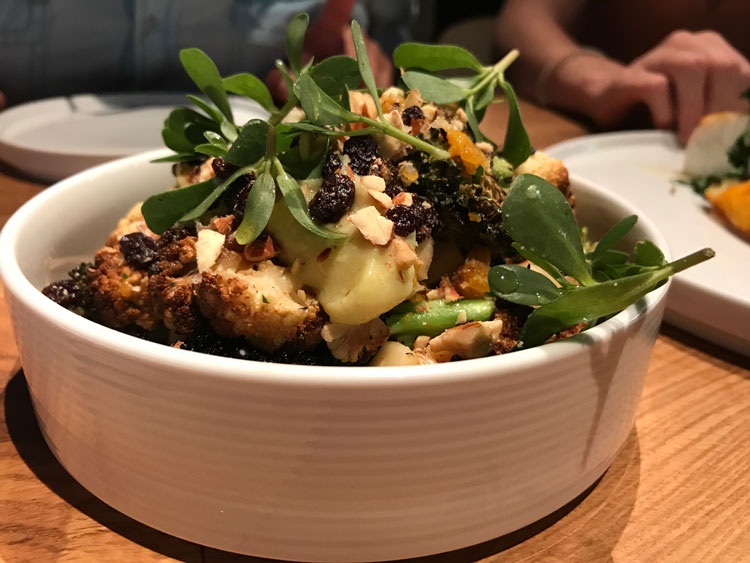 Beverage director Jeremy Bustamante, who once ran the bar program at Salt, hits it out of the park with his opening cocktail menu. His velvety vermouth cocktail (Dolin dry, lavender, thyme, lemon) is a remarkably drinkable example of why we should be imbibing more low-proof cocktails, whereas the mezcal preparation (Espadin, sage, grapefruit) is smoky, herbaceous and bright. The restaurant’s strong wine list is divided into old and new world selections, and there’s a solid beer list and a nice selection of sake to round out the drink menu.

Studio for Spatial Practice designed a concrete-rooted space that feels at home with Braddock’s industrial past that’s uplifted and balanced by brick and light-toned wood. Rock, punk and hip-hop blare from the speaker out front but indoors rests in the comfort zone that adds energy but doesn’t interfere with conversation. Artist Mia Tarducci Henry’s bright paintings grace the walls; I’m told more of them are to be hung soon. Currently, the front dining room, with a buzz from the bar and the semi-open kitchen, feels like it’s a lot more fun than the back dining room. 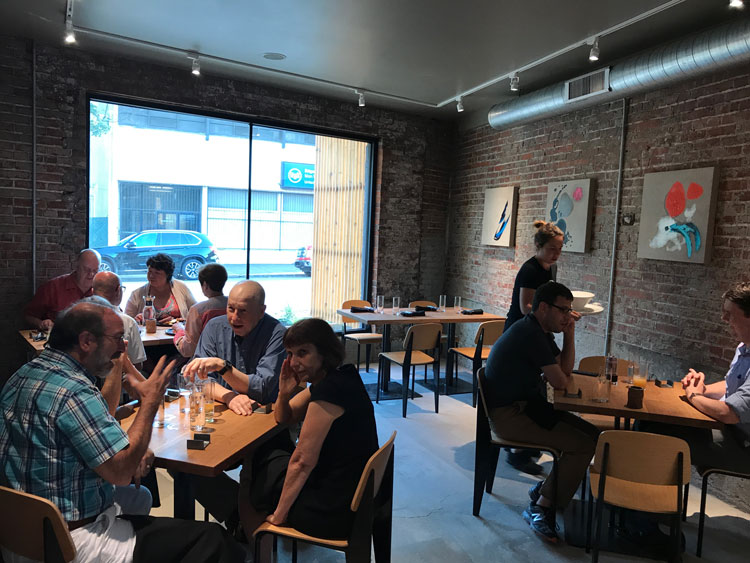 Sousa has ambitious plans for the restaurant. He’s going to dry-age meat using both a traditional western method and through koji-fermentation. A bread program is in the works, as is a cultured-butter collaboration with former Salt chef Chad Townsend, now of Millie’s Homemade Ice Cream. Sousa says he wants to hone-in on working the multimodal, five-foot, wood-fired hearth that is a focal point between the bar and the kitchen.

The feeling I get out-of-the-gate from Superior Motors is that this is less about a dining experience where you’re expected to bow to the ambitious ego of a young chef (see: Salt) and more of an invitation to join in the experience. Sousa certainly seems to be having fun and to have loosened up a bit, and that’s excellent. It’s hard to be humbled by near-failure, and it’s encouraging to see someone learn and grow from that. It's obviously too early to call this a rising-from-the-ashes story; it certainly is off to a promising start.