David Bulman’s hyper-local, 12-seat restaurant has the potential to become a dining destination. 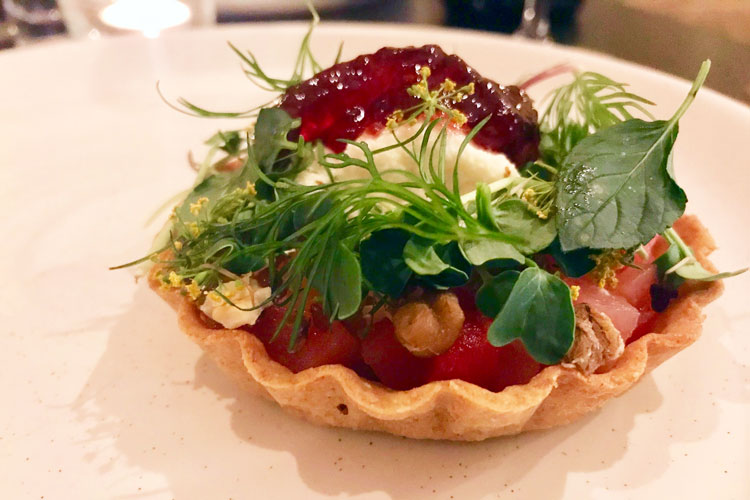 David Bulman opened Seasons, a tasting-menu-only restaurant with a hyper-local focus, in October. It’s one I’m keeping my eye on as we move into 2019 and you should too. Buhlman, 30, has the potential to join the small cadre of younger chefs who are making an impact on Pittsburgh’s dining landscape.

Bulman grew up in a working-class family outside of Buffalo. When he was 16, he moved into the home of a friend’s family as both of his parents were dealing with addiction issues. Bulman moved to Pittsburgh in 2007 to attend the now-closed Le Cordon Bleu culinary academy and, after graduation, worked for Douglass Dick at his farm-focused restaurant, Bona Terra in Sharpsburg.

But he had his sights set on something more significant.

Every Wednesday at 1:30 p.m., Buhlman sent a resume, cover letter, personal letter and references to the French Laundry, Thomas Keller’s prestigious Napa Valley restaurant. He did that for nearly two years, and the Michelin 3-star restaurant kept rejecting him, suggesting that the inexperienced chef spend some time training in New York City kitchens and then reapply. He stayed at it anyway. Eventually, management gave him the opportunity to stage at the restaurant.

It went poorly at first. “I could cook, but I didn't have the refined skill set you needed to work there,” he says.

Still, Bulman managed by acing the cooking test and interview at the end of his stage to get offered a position as cook. He worked there for about a year, at which point he had to decide either to put down roots in Napa and work his way up the ladder at the French Laundry or return to his new home. “I wanted to take what I learned and bring it back to Pittsburgh,” he says. “Also, my rent was really high.”

Bulman worked briefly at Verde in Garfield and then at notion with Dave Racicot. “He works in a very similar manner to how I do. I loved working with him,” Bulman says.

He then jobbed around for a few years as a private chef. “At first, I would show up for these dinners with ingredients in old yogurt containers because I didn't have anything else,” he says.

He built a high-end following, earning enough to invest in new equipment. Two years ago, he found his current space in Etna. He ran it with a business partner as Quickhatch, a coffee shop with good food. After that relationship dissolved, he started offering chef’s table-style tasting dinners. He met Masahiro “Mas” Ogiso at one of those events. “He offered to come on as either an investor or a partner. I wanted to have him to come on as a partner because there was a lot I could learn from him. I knew it would be a better decision in the long run to have some mentorship,” Bulman says.

As for the menu, Bulman feels it’s a logical choice for him to go hyper-local. “Can you take what's right here, right now and make something special? By eliminating things, it forces you to find your voice. There is no cinnamon here, so there's going to be no cinnamon,” he says.

I didn’t miss the cinnamon on the apple crisp (poached apple, oat crumble, whipped maple, warm cream), one of two desserts on the 8-course tasting menu I worked through in November. Nor did I find the hyper-local focus constraining or pretentious. Instead, while still a hair rough around the edges in points-of-service and execution, I found Seasons to be relaxed, a touch whimsical and wholeheartedly enjoyable. Partridge breast, cooked on the bone and served in consomme, with parsley oil, carrot, celery and herbs, was resonant in flavor and refined in preparation. Braised leek heart with herb breadcrumbs, sunchoke pudding and chips and hickory nuts was a stellar vegetarian dish, complex in taste and texture.

Bulman says he plans on hiring a farmer to work an acre plot in Allison Park next year, and he is talking to J.L. Kennedy Farm about raising a flock of ducks for the restaurant. He says he’s ready to be hyper-seasonal even in winter. Though he missed part of peak fruit season, in the summer he was able to get mushrooms, farmers market vegetables and other items to preserve. "I wish I had more peaches and berries. But there are so many apples, so it's ok,” he says.

The restaurant is open on Thursdays, Fridays and Saturdays, and diners can choose from 4-, 6- and 8-course menus, as well as a VIP chef’s tasting menu. The 4-course is offered only on Thursdays; vegetarian options for each menu are available, too. Reservations should be made in advance.