PM dining critic Hal B. Klein takes a look at the new Richard DeShantz restaurant ... and he has the scoop on what's next from the energetic restaurateur. 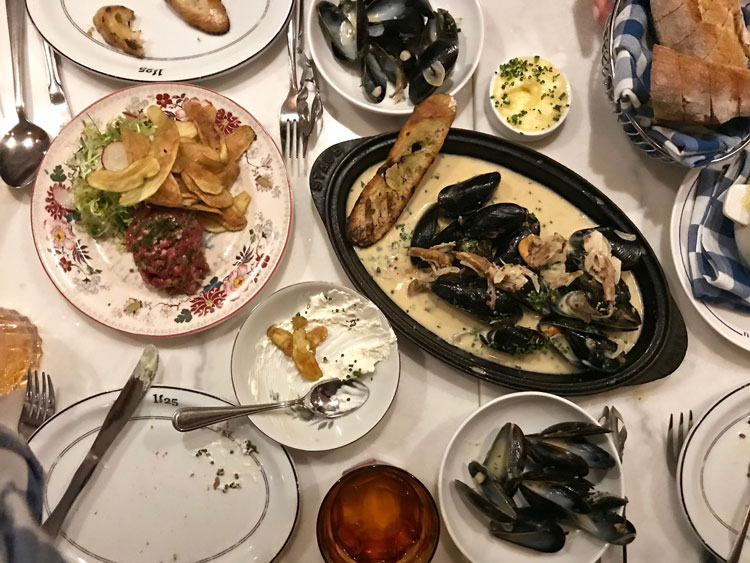 Ordering French onion soup almost always becomes a bummer. The broth is too sweet, or salty, or savory. The onions are poorly cooked, bitter. The topping is a wee bit of Swiss cheese burned on a floating island of stale, generic crouton or a blanket of under-caramelized cheese sauce.

It’s a rare treat when somebody gets it right.

The culinary team at Poulet Bleu, which just opened in Lawrenceville and is the first of four Richard Deshantz Restaurant Group restaurants scheduled to launch this year, nails it. Onions, a pound of them for every cup of soup, are slow-rendered overnight to achieve maximum, velvety sweetness. Veal stock is enhanced with oxtail. Crisp baguettes are dosed with Cognac and then topped with Comte and Emmenthaler cheeses, gently browned under a salamander. You’ll finish the whole bowl, onions and all, and then you’ll fight over the bits of cheese baked to the side of the serving vessel.

A strong restaurant opening in Pittsburgh is about as rare as that elusive bowl of soup, and you’ll find that here, too. From decor to dessert, Poulet Bleu, is a treat. 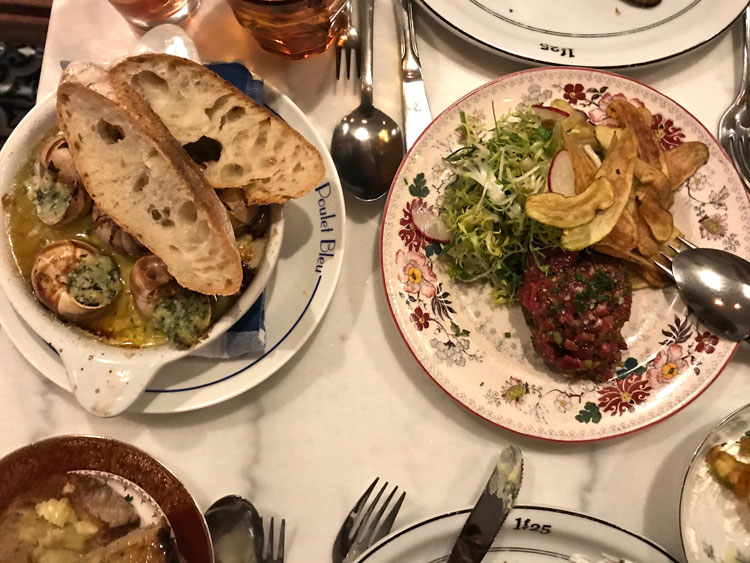 DeShantz has made a name for himself with his detailed restaurant design. His Downtown establishments, Meat & Potatoes, Butcher and the Rye, tako and Pork & Beans, are boisterous, energetic and stereotypically masculine. With his first foray from Downtown, DeShantz goes softer and elegant. Hues of blue and white are the dominant colors, popping with gold, pewter and red. The space is airy, bright and comfortable. The open kitchen, with its powerful (and pricey) Heston range, is an energetic focal point. Come warmer weather, the 50-seat restaurant will expand into the courtyard, further enhancing the transportive atmosphere. A larger upstairs dining space also in the works.

"I wanted to focus on the food. Slow the pace down and make it a little more special. I wanted it to be a little quieter,” DeShantz says.

DeShantz oversees the big picture culinary operation of Poulet Bleu, but the execution of the French bistro menu largely is left to Dave Racicot, now the restaurant group’s executive chef and de facto culinary editor, who will remain in the restaurant's kitchen for the next few months (more on that below), and Ryan Hart, Poulet Bleu’s chef de cuisine. 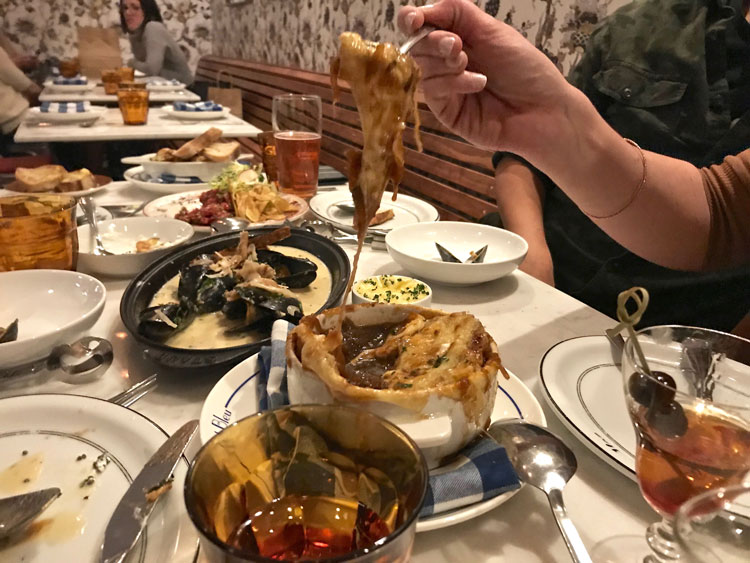 Start with a classy spin on “chips and dip,” caviar served with tangy creme fraiche and crunchy potato chips. Mussels, bathed in a rich tarragon sauce that serves as a flavor boost for both the bivalves and the grilled bread they’re served with, are plump and sweet. Or, if land mollusks are more your thing, order buttery, herbaceous escargot. For now, skip the tartare — as it stands, the chopped beef needs more salt and fewer chunks of dried mushroom, which add way too much umami.

Steak Frites come with satisfying steak and killer matchstick fries. There’s a big, big burger that’s good, but could be simplified; its double-stacked patties have a tasty funk but are too thick, and there is a blanket of cheese (perhaps choose cheddar or raclette but not both) that’s overwhelming and salty. The bun holds up though, and it's a steal at $12. A chicken dish comes two-ways, with a roasted breast that needs salt (and, a little liveliness from herbs or garlic) and leg blanquette, a comforting chicken stew that calls back to the best pot pie filling. That dish is served with potato pave, a refined scalloped potato dish popularized by Thomas Keller, that looks like stacked cobblestones and is the star of this plate. Roasted carrots served on a bed of fromage blanc, brown butter and toasted hazelnuts make for a satisfying side dish. 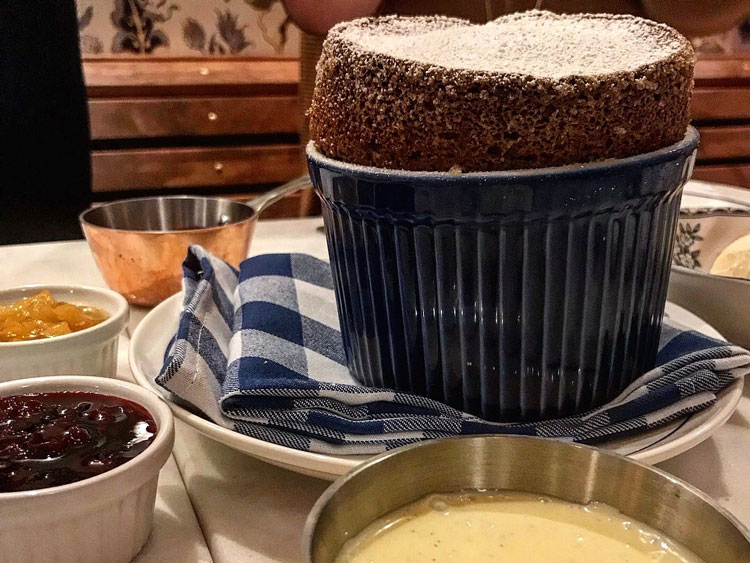 James D. Wroblewski II, who spent the better part of decade working as pastry chef at the Fairmont Hotel Downtown, handles desserts from Poulet Bleu’s basement kitchen. His work is reason enough for a visit. Chocolate soufflé rises to lofty on the outside and gives way to a buttery cloud within. Chocolate sauce doubles down on cacao gratification, mix it with the accompanying creme anglaise to add a layer of sweet milkiness; the dish also is served with cherry and pineapple compotes, as well as an extraneous banana ice cream. But then there’s the pavlova. Oh, my. It's beautiful. Light, crispy meringue caps a pillowy interior which caps tart and refreshing blueberry sauce and yuzu curd. It’s all decorated with a snowball of matcha, which adds to the visual display but also incorporates a little too much tannin. 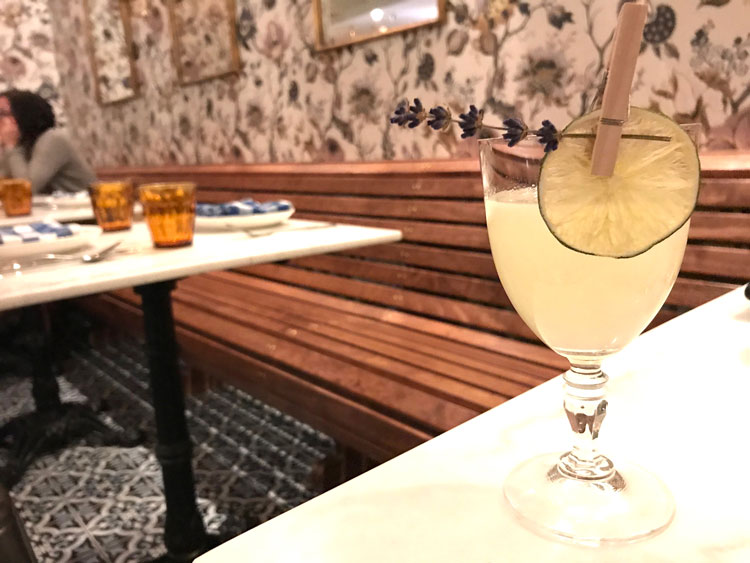 RDRG beverage director Cecil Usher’s cocktail menu is a restrained, well-executed list of classics. John Wabeck, Pittsburgh’s celebrated sommelier, has an approachable and elegant wine list, and the expertise to lead (and train staff to lead) diners to the best choices.

Poulet Bleu is the beginning of what looks to be a banner year for DeShantz, who, along with business partner Tolga Sevdik, was recently named as a semifinalist for the 2018 James Beard Foundation Restaurant and Chef awards. Here’s the rundown of what’s to come:

Next up is Fish Nor Fowl, a 90-seat restaurant in the Garfield space the formerly housed Salt of the Earth. Dan Carlton (Nine on Nine, Cure, Butcher) is the chef de cuisine, and he and Raciot will execute a small- and medium-plate menu that won’t be limited by geography or cuisine.  "How do I transform this space, get out under the umbrella of Salt, but not erase it?” is what DeShantz says he asked himself as a design question. Mid-century modern, and Scandinavian elements, including a whitewashed floor, inform the theme. Salt’s famous slate wall remains, but it’ll be transformed into a living wall vibrant with plant life. He’s also expanded the second level, which functioned almost like a penalty box at Salt, added a second bar, floor to ceiling glass with a waterfall bar and a floating shelving bar back from Urban Tree. "This was the only space I thought was really flawed at Salt. I want to make this somewhere you want to be." Fish Nor Fowl is expected to open in April.

Following that, DeShantz returns Downtown with Gi-Jin, a minimalist, space with strong Japanese influences. Raciot will be front-and-center in the development of the menu, which will be 95% raw (sushi, sashimi, crudo, tartare, etc.) and will blend traditional and forward-thinking dishes. As he’s done with Butcher and the Rye and tako, DeShantz will concentrate on a single spirit — in this case, gin —  for his bar program. The focal point of the 30-seat establishment is a single floating bar, where both chefs and bartenders will work, and Standard & Custom woodwork will be used throughout the space. "It's almost like you're in a cave,” DeShantz says. Look for a mid- to late-summer opening.

And, following that, DeShantz will open Coop de Ville in the Strip District space that formerly housed Marty’s Market. James Ciminillo (Pork & Beans) will run the restaurant's kitchen, which will serve casual comfort food such as fried chicken, Cincinnati chili and other dishes influenced by Ciminillo’s roots (he grew up near Cincinnati, OH and Lexington, KY) from a walk-up counter. DeShantz says he aims to appeal to a younger crowd at Coop de Ville — think comfortable lounge chairs with USB ports, bocce, pool, arcade games and big-screen sports. Coop de Ville is expected to open in early fall and will expand with a duckpin bowling alley later in the year.