Pete Tolman's Detroit-style pizza at the Strip District restaurant incubator is a must-get. 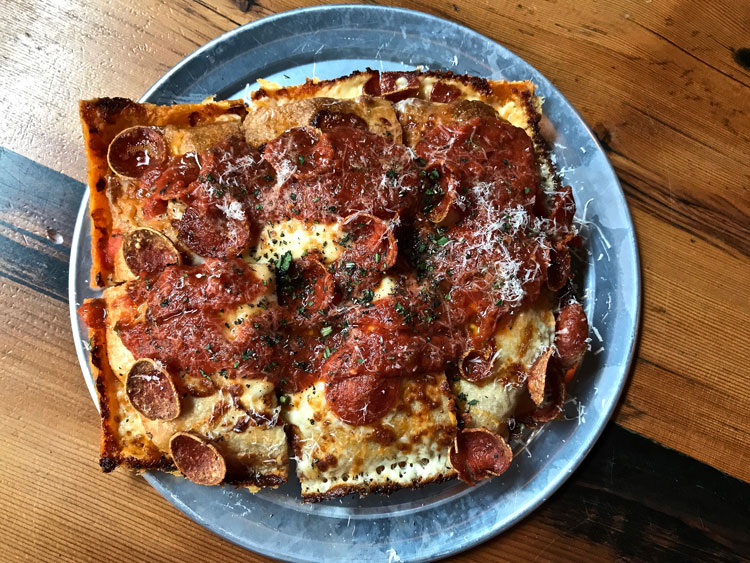 I sampled over the past few days dishes from the four new chef/owners — Jesse Barlass (Colonia), Hoa Le (Bahnmilicious), Ryan Peters (brunoise) and Pete Tolman (Iron Born). All have considerable potential, but Tolman is strongest out of the gate. Plus, he’s bringing something genuinely new to Pittsburgh — Detroit-style pizza. (There’s a chain that also makes pizza in this style(ish), but Iron Born is much better and hones closer to the traditional preparation.)

Tolman most recently was the corporate executive chef of Giant Eagle’s Market District stores, before that he worked under Dave Racicot (täkō) at Lautrec. He says that he started working on the Iron Born concept about a year ago, and has spent the past few months working to push forward his pizza-making technique.

Detroit-style pizza is believed to have been created in the late 1940s at a place called Buddy’s Pizza (formerly Buddy’s Rendezvous), yet somehow wasn't sought-after outside of the region until just a few years ago. You’ll likely be flabbergasted about why it largely remained a regional secret for so long once you try Tolman’s pizza.

Detroit-style dough is similar to that of Sicilian-style pizza — it should be airy, spongy and slightly feathery when it comes out of the oven. Tolman hired Andrew Stump, a talented baker who has worked at Five Points Artisan Bakeshop, The Livermore and Marty’s Market, to help develop Iron Born’s dough recipe. "He's helping me with mixing temperatures, friction temperatures, shaping. Things I know, but that he's been doing for a long time. Before we mix, we know the temperature and humidity of a room. We know the temperature of the water,” Tolman says. 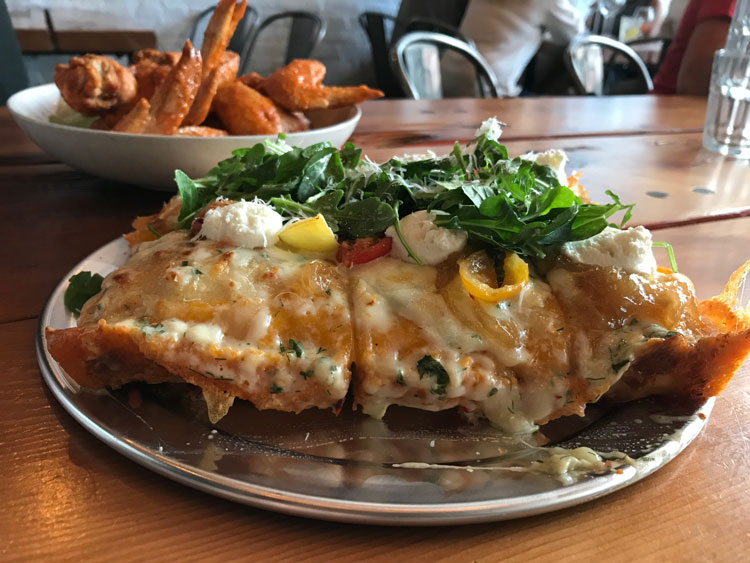 Detroit-style pizza typically is built with toppings and cheese arranged underneath the sauce. Wisconsin brick cheese is the preferred cheese. Tolman says that he plans on taking some liberties with the build (he calls his pizza style “Detroit-influenced”). For example, the pepperoni on his “Red Top” pizza still is placed atop the pie to develop the sausage's desirable crispness. Tolman finishes the pizza with tomato sauce, garlic oil, fines herbs and a two-year-old Solo di Bruna Parmesan cheese after he removes it from the oven.

The pizza is cooked in dark-metal, slightly rectangular pans with a gentle slope; it's thought that the original pans at Buddy's were spare parts from a Detroit automobile factory. Tolman’s are 8-by-10 at the bottom and 8.5-by-11 at the top. Spread a high-fat cheese such as brick cheese all the way to the ends of the pan, and the cheese begins to melt over the edges of the dough, caramelizing on the dark metal. It forms an edge-of-the-pan crust people fight over when eating a well-made macaroni and cheese. Tolman knocks this up a level by adding a sprinkling of cheddar cheese during the parbake, which gives his pizzas a duel crispness on the outside.

The Iron Born menu also includes items such as wings, ribs and burgers. However, early indications look as if pizza will be the main draw as long as he can keep up with demand.

"The space is a challenge. We're trying to figure out what volume we can do. That's what we have to learn,” he says.