A first visit to the much-anticipated restaurant from the Pierogi Night founders, plus Provision PGH gives back, and Station introduces brunch and late night service. 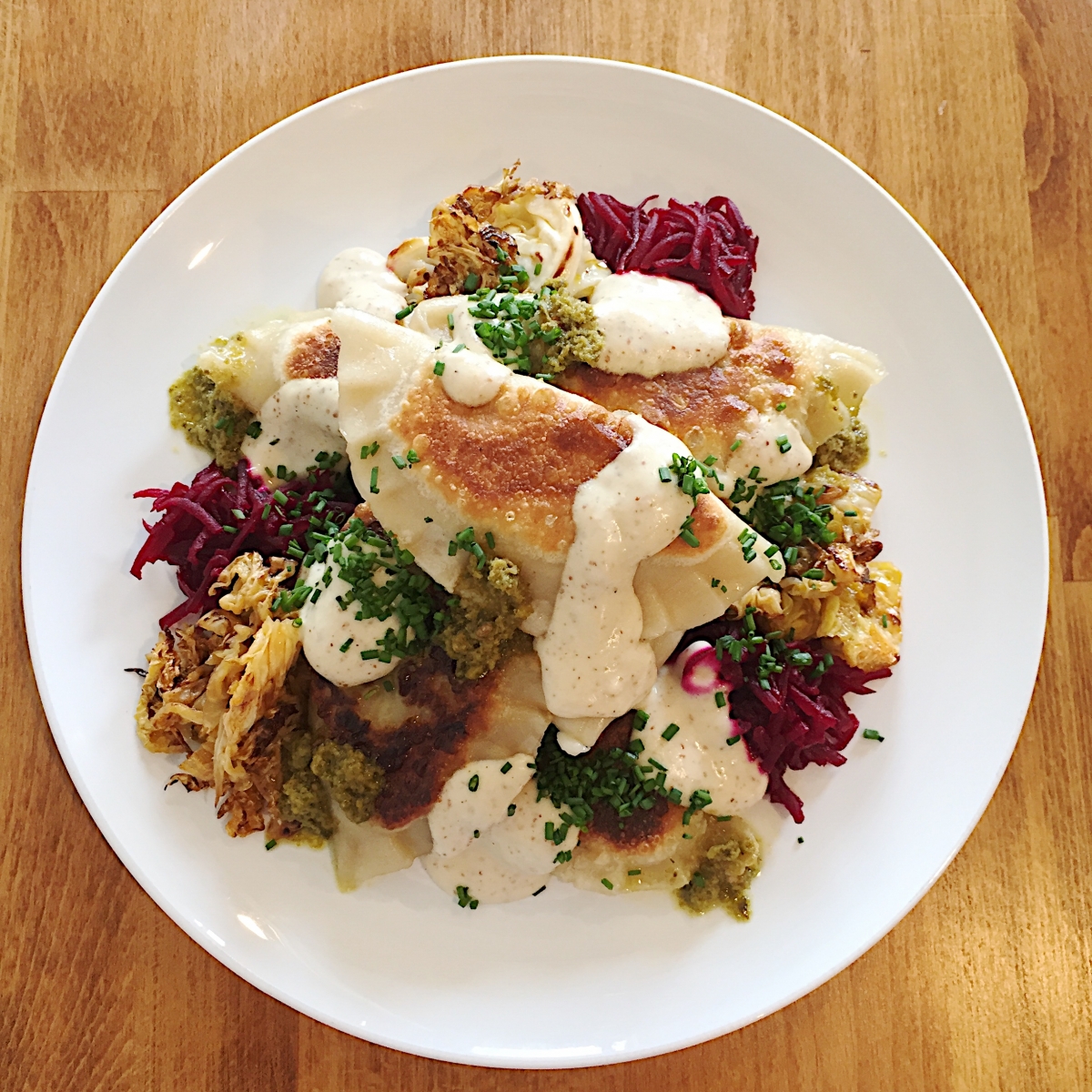 Apteka, the long-anticipated brick-and-mortar restaurant from Pierogi Night founders Kate Lasky and Tomasz Skowronski, now is open in Bloomfield. Their menu tilts toward what is colloquially known in Pittsburgh as “hunky food” (pierogi, halushki, stuffed cabbage, etc.), but with a twist: Apteka also is a 100% vegan eatery.

“A lot of people here have a rough sense of what we’re doing with the food here, or at least a reference point to it,” Lasky says.

“It’s a crossroads restaurant. There’s a connection with a hip city in central Europe — Warsaw — and 6th-generation Pittsburgher (Lasky) who went to the Croatian Center and had a strong heritage in this community,” say Skowronski, who was born in Pittsburgh to Polish parents.

Apteka’s atmosphere is decidedly and intentionally casual. It felt to me like a mix of eatery, community center, neighborhood bar and a performance art space. On the night I visited the mood was set by a surreal ambient music soundscape on the stereo (later that night there was a DJ). It’s the sort of place where after you place your order at the counter you might be asked to take water carafes and glasses back to your table, but you don’t mind doing it. 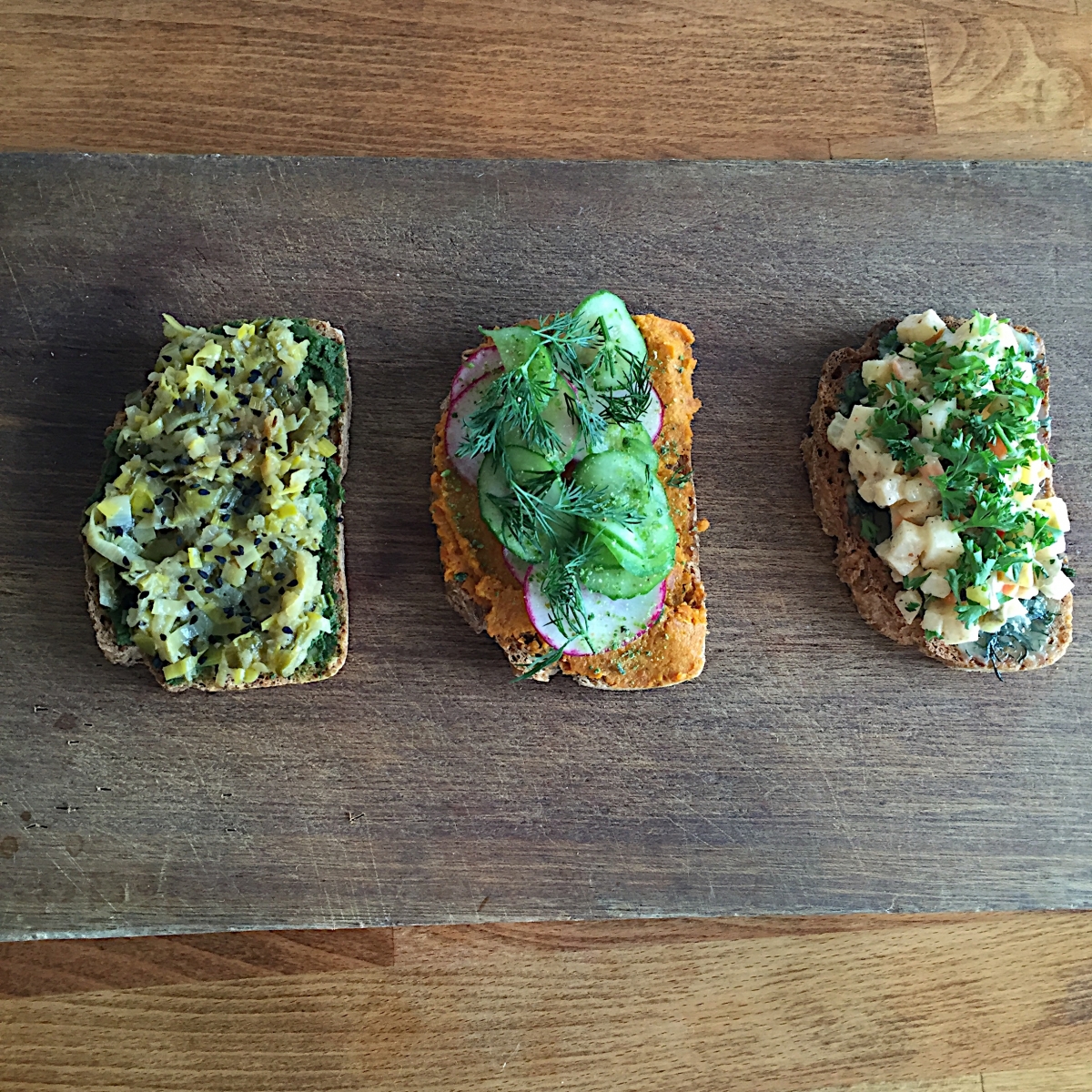 “Affordability and accessibility are really important to us. We want a place where people feel like they can hang out,” says Lasky.

None of the items on the short menu costs more than $11, and many go for much less than that. The two owners both have worked at some of the city’s best restaurants (Lasky at Root 174, Skowronski at e2) and the dishes are a nice blend of technique and homespun.

I loved the kartofole & jogurtem, a comforting dish of boiled potatoes, sauerkraut, lingonberry jam and yogurt (cultured in-house from almond and cashew milks). Kanapki, a variety of tartines, also was among my favorite dishes; I especially enjoyed the one topped with carrot pate, radish, cucumber, carrot tops and dill.

Although I’m a big proponent of butter and cheese in my pierogi, it’s pretty clear that years of experience have paid off in Lasky and Skowronski’s quest to create a vegan variety. You get a 7 of them for $11, though I’d suggest sharing those and something else since eating all 7 might make you feel stuffed. There was some consternation at my table about the level of heat in the pierogi, but I didn’t mind it. I would hope to see a bit more distinction between the flavors (I wasn’t sure if I was eating sauerkraut & mushroom or a smoked potato & mustard greens unless I looked) in the future, however. 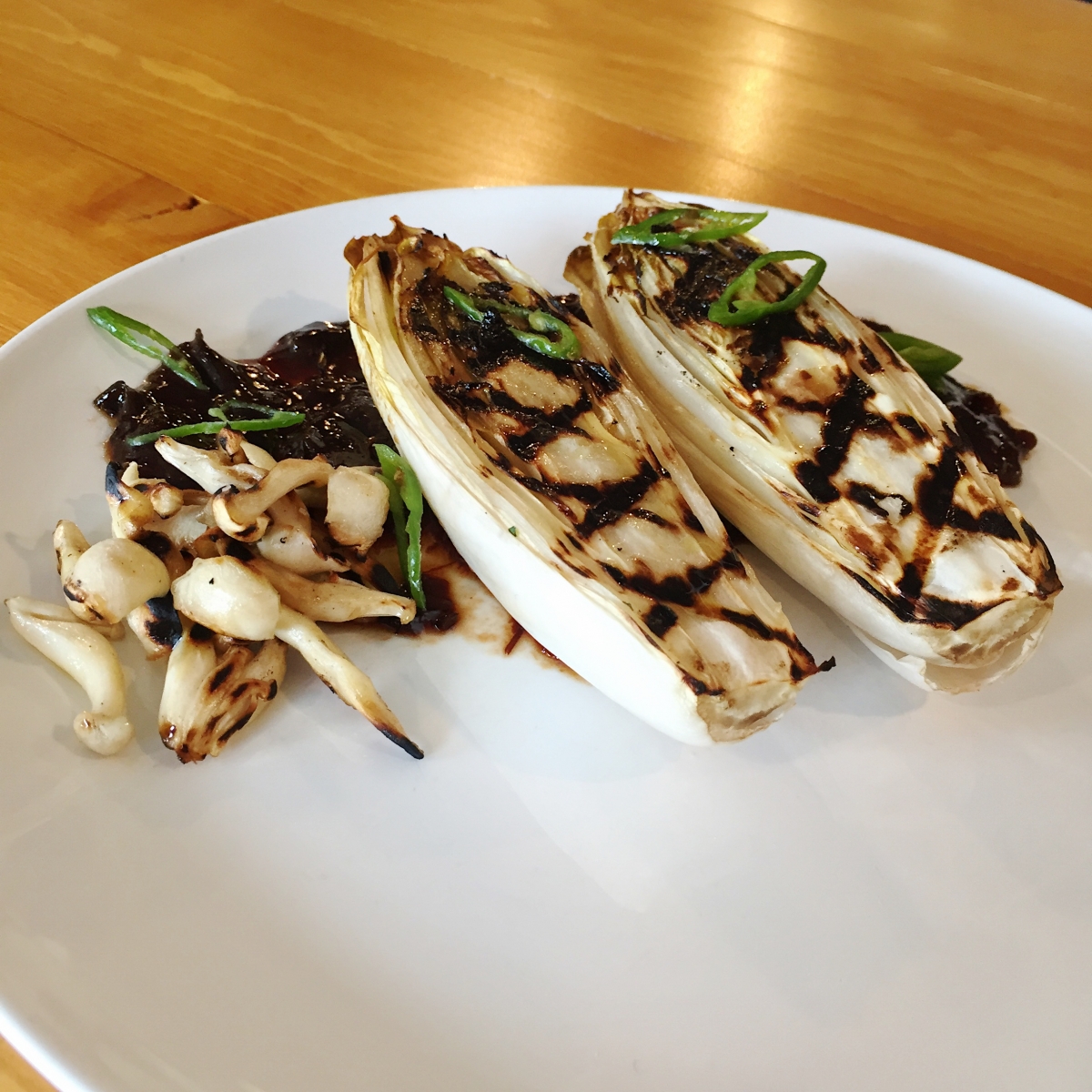 The drinks program at Apteka could become a real highlight. Bourbon with pickled prune juice and sage might not sound like something you want to order at a bar, but with softly savory cocktail was quite good, as was the gin with celery seed. Be on the lookout for the house-made cordials like quince, plum, cornelian cherry (dogwood) sour cherry, black walnut and black raspberry.

“We want to incorporate a lot of the same ideas we’re doing with the food into the drinks program. Things that fit Pittsburgh but also central and eastern Europe,” Lasky says.
​
Apteka won't be for everybody. Some of my dining companions didn’t dig the performance art soundscape. Other diners will find the space too casual. I would like to see a few more light dishes on the menu to pair with the otherwise heavy food. Some of the dishes need refinement, but that’s to be expected from a new restaurant.
​
Apteka fills another hole in Pittsburgh’s culinary landscape. It’s a stepped-up vegan eatery with a community focus and a lot of heart. I’m looking forward to tracking how it develops over the next few months. 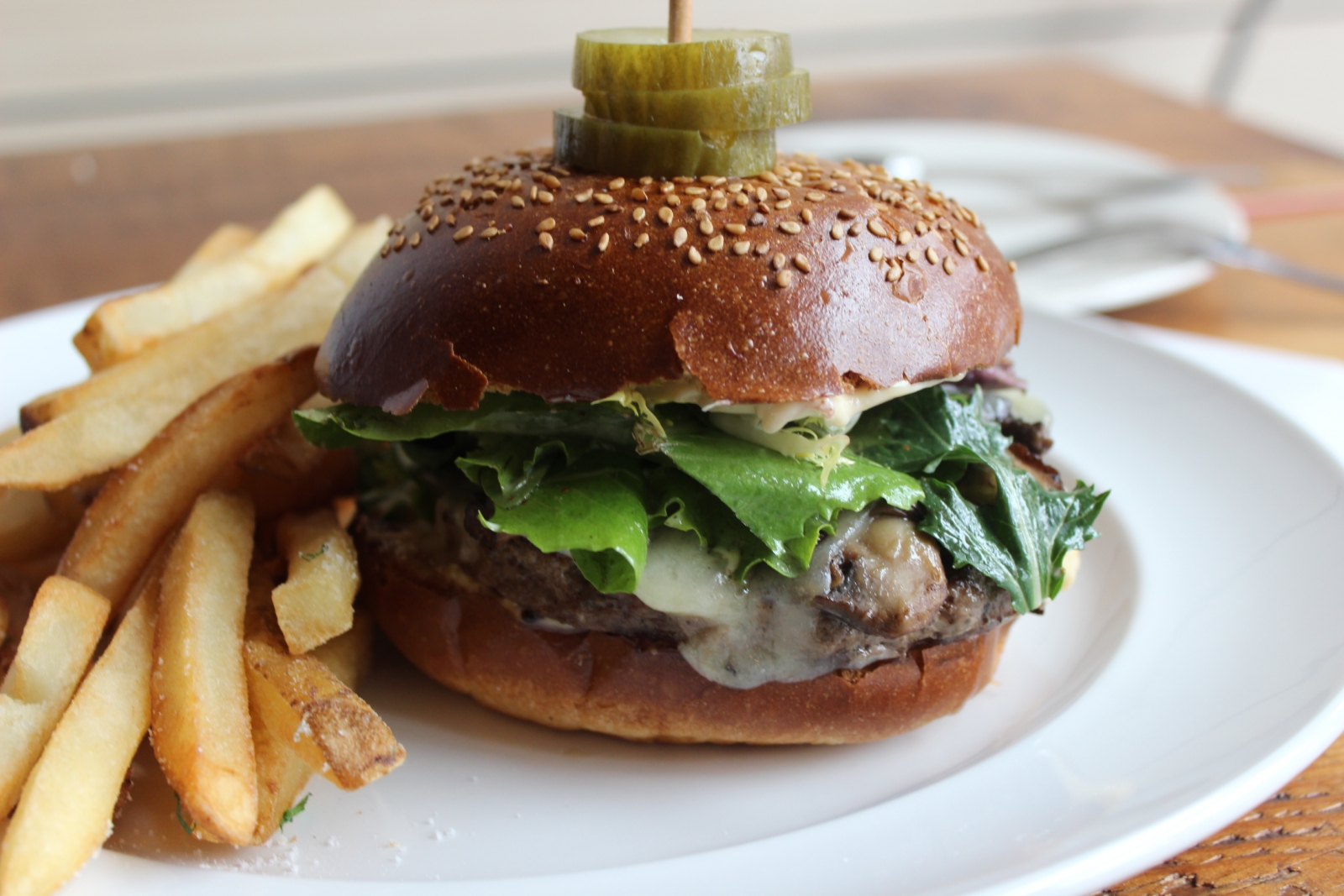 Have you had the Umami burger at Provision PGH, Stephen K. Eldridge’s restaurant in the Smallman Galley? If you’ve already tried it, you’re likely among the growing group of us that rank his burger as one of the very best in Pittsburgh.

If you haven’t tried it yet, you ought to. The beefy burger is topped with greens, smoked mushrooms, parmesan frica (the crispy puffs are a step forward in burger construction, they deepen flavor and add texture), cheddar and aioli.

Well now is a good time to get one: Eldridge and wife/business partner Susan L. Cope announced that they are going to donate $1 for every burger sold on Tuesdays, Wednesdays and Thursdays to the Greater Pittsburgh Community Food Bank.

“Homelessness and hunger are realities that hit more than just a little bit close to home for both of us. Now that finally we are finally in a position to offer a small amount to help others, we would really like to do anything that we can," says Cope. 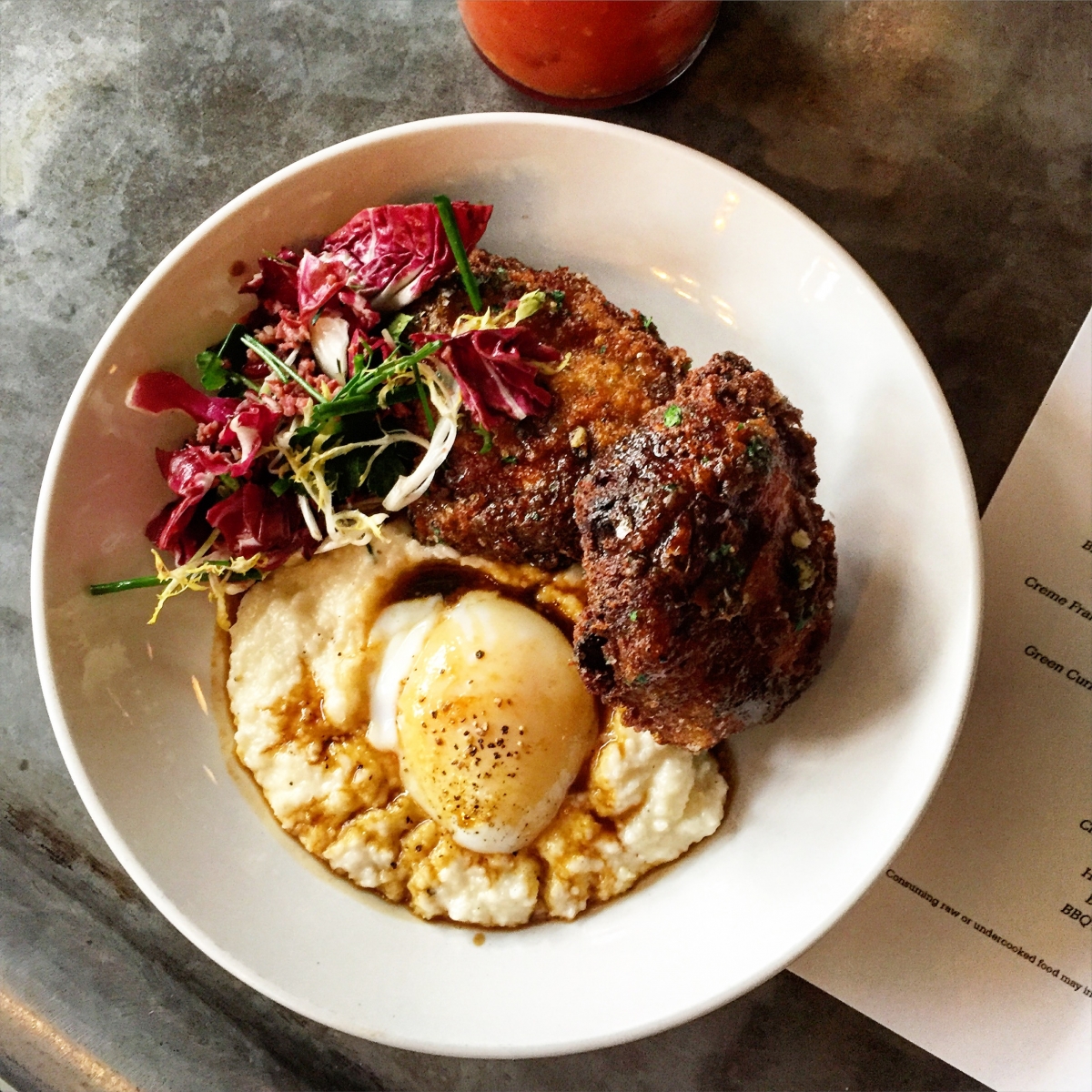 Station introduces brunch service this week. The Bloomfield restaurant will serve brunch from 10 a.m. to 2 p.m. every Sunday.

I previewed the menu last weekend, and was impressed by the dishes that I tried. The crispy ranch thigh, a chicken thigh coated in tapioca and fried crisp, is a solid choice for the those who tilt savory for their brunch choices; try it with one of the house-made hot sauces. Fried brioche sticky is what I’d recommend for diners who like a sweeter brunch treat. Get it with a glass of the excellent — if rather boozy — milk punch.

Gamble also is pairing with Pittsburgh chefs for a new Friday night late night series. It kicks off this week with Craftwork Kitchen (co-owners Justin Janosko and John Pieranunzi own Craftwork) and tacos. March 18 is Ben Dougherty of Pittsburgh Po Boy, the 25th is Red Panda (Gamble’s “seriously inauthentic” ramen shop) and April 1 is Partners in Crime with items like Scotch egg and chicken in waffle.