Finding a Rainbow in the Pandemic

The owners of Von Walter & Funk in Lawrenceville turned a long-planned kitchen renovation into an unexpected haven during the state’s stay-at-home orders. 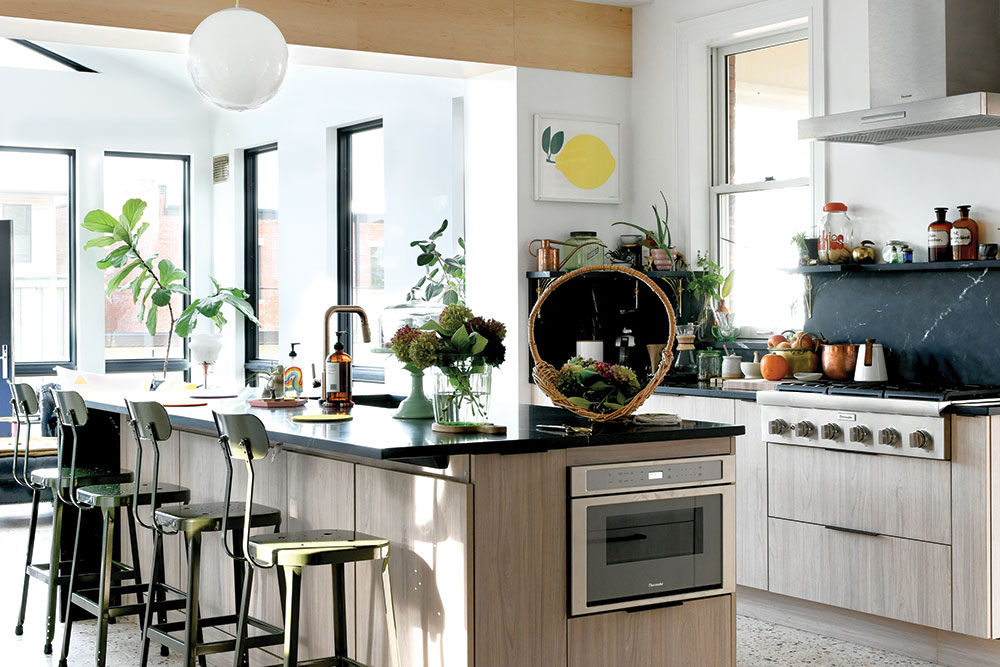 It didn’t start as a pandemic project, but it became one.

After eight years of living in their 120-year-old Victorian in Highland Park — jokingly called “McVersa Manor” — Shawn Aversa and Jamie McAdams, who own lifestyle store Von Walter + funk|BALLOON in Lawrenceville, decided their kitchen needed some help.

Like most houses of that era, the home features high-ceilings and historic charm, complemented by the couple’s carefully curated collection of vintage items and signature pops of bright colors. But while the home’s lack of an open floor plan was always part of its appeal (“We love its original form,” Aversa says), the kitchen’s location, cut off from the rest of the house, was not — particularly for a couple that loves to entertain.

“You had no idea what was going on in there,” Aversa says of the kitchen. “It was kind of painful when we had guests here.”

Throughout the years spent in the home, the couple learned what practical features they’d like best in a new kitchen.

That list included easy-to-maintain tile floors for their tribe of pups and raised cabinets to accommodate the couple’s height. Both Aversa and McAdams stand well over 6 feet tall.

“We didn’t want to bend over to use the oven. We wanted everything at eye level,” Aversa says. “That was one of the things we always talked about with a task-oriented kitchen.” 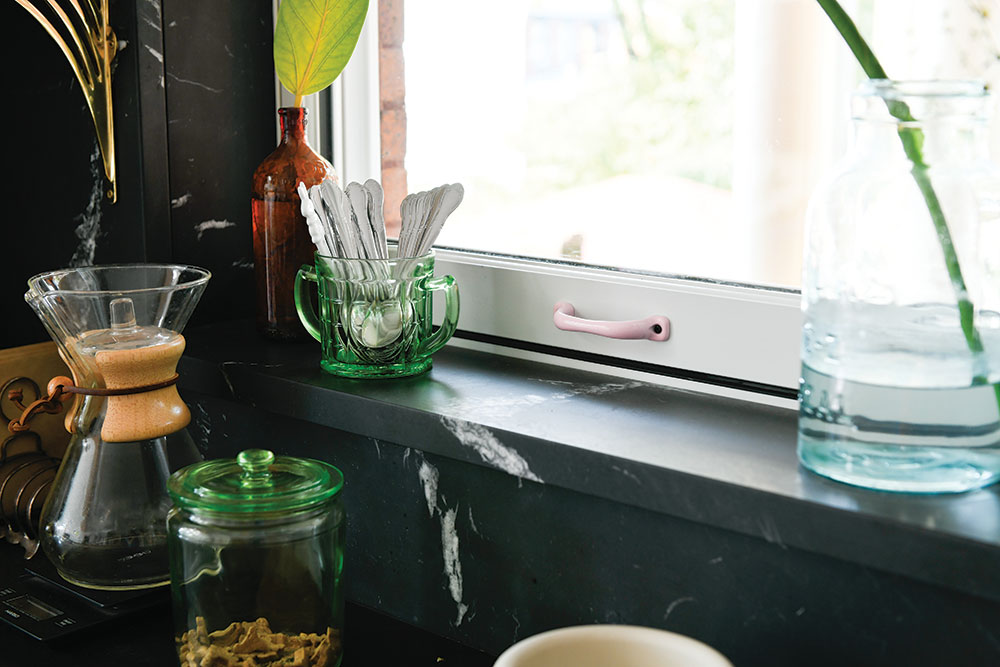 In summer 2019, Pittsburgh-based Century Interiors broke ground on the project which, besides the kitchen renovation, included a two-story addition with a two-car garage on the bottom level and a California room — level with the home’s first floor — on top.

Knowing the addition would never match the rest of the home’s traditional features, Aversa — aided by architect Jeff Wetzel of AE7 Pittsburgh — took a more modern approach, conjuring up a light-filled, airy room with plenty of clean lines.

“There was a minute there where we were going to really try to match it. I kind of woke up one day and said, ‘Stop, we’re not doing this,’” Aversa says. “It’s blatantly an addition. Why are we trying to hide it? It’s almost an injustice to the home. I think you can bring those two elements together to complement each other.”

In early 2020, the addition, while not complete inside, was closed in and airtight. Good thing, because in mid-March construction — and the world — came to a halt as a result of the COVID-19 pandemic. 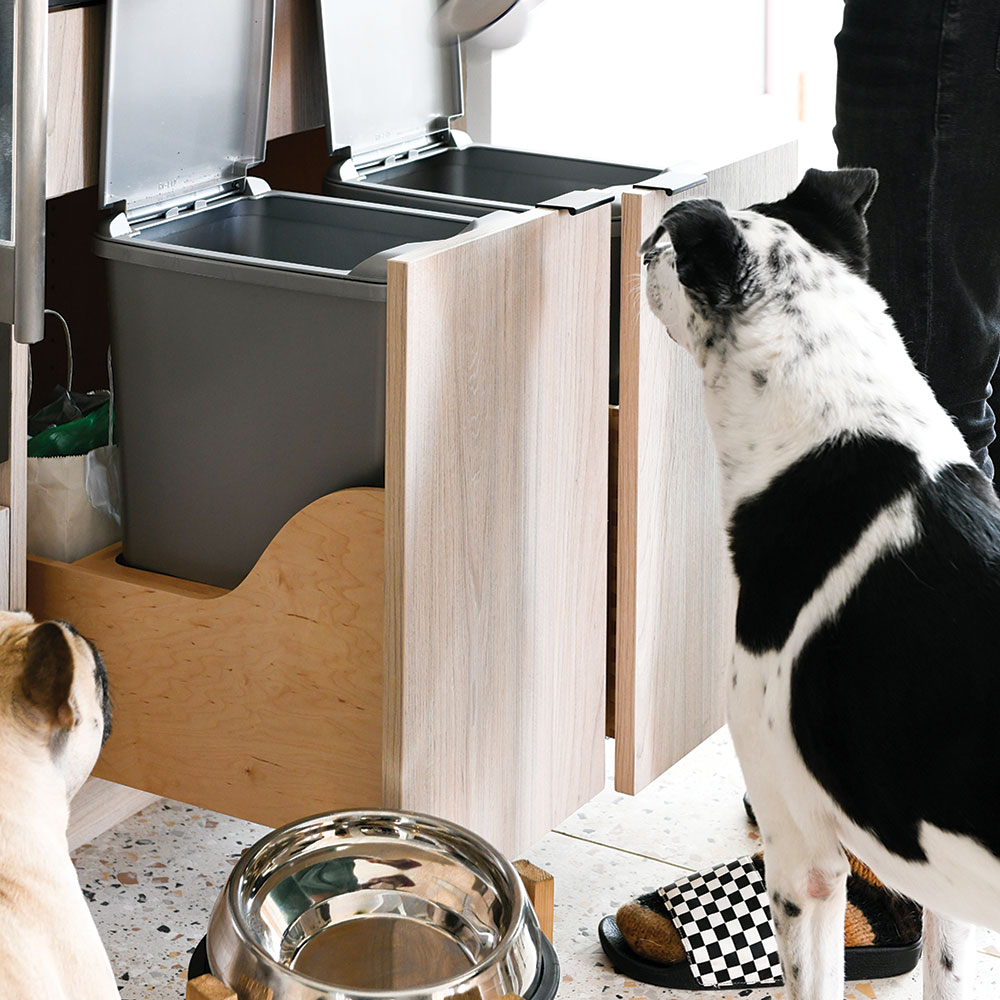 At the time, the kitchen had yet to be installed. Confined with their three dogs to two tiny downstairs rooms — and tiring of takeout food — the couple decided to make use of the unfinished addition, adding some of their furniture to it.

“There was no heat,” Aversa recalls. “We had a hole in the floor and there was a giant extension cord that powered everything in this room, mostly space heaters.”

They also created a make-shift kitchen, adding a freestanding cooktop and buying what Aversa describes as “the Cadillac of toaster ovens.”

As it turned out, the stay-at-home orders had a silver lining for the couple. As they were enjoying their new room within view of the kitchen, they realized it was still cut off from the rest of the house. So, they changed up the design, taking down a large interior wall between the kitchen, butler’s pantry and dining room — even though that meant losing some of the home’s original features. Other original elements, such as built-ins and a pantry door, were repurposed elsewhere in the house.

“We made some sacrifices, but I think it was the right choice. We kept the charm,” Aversa says now. “It really pulls the whole house together.” 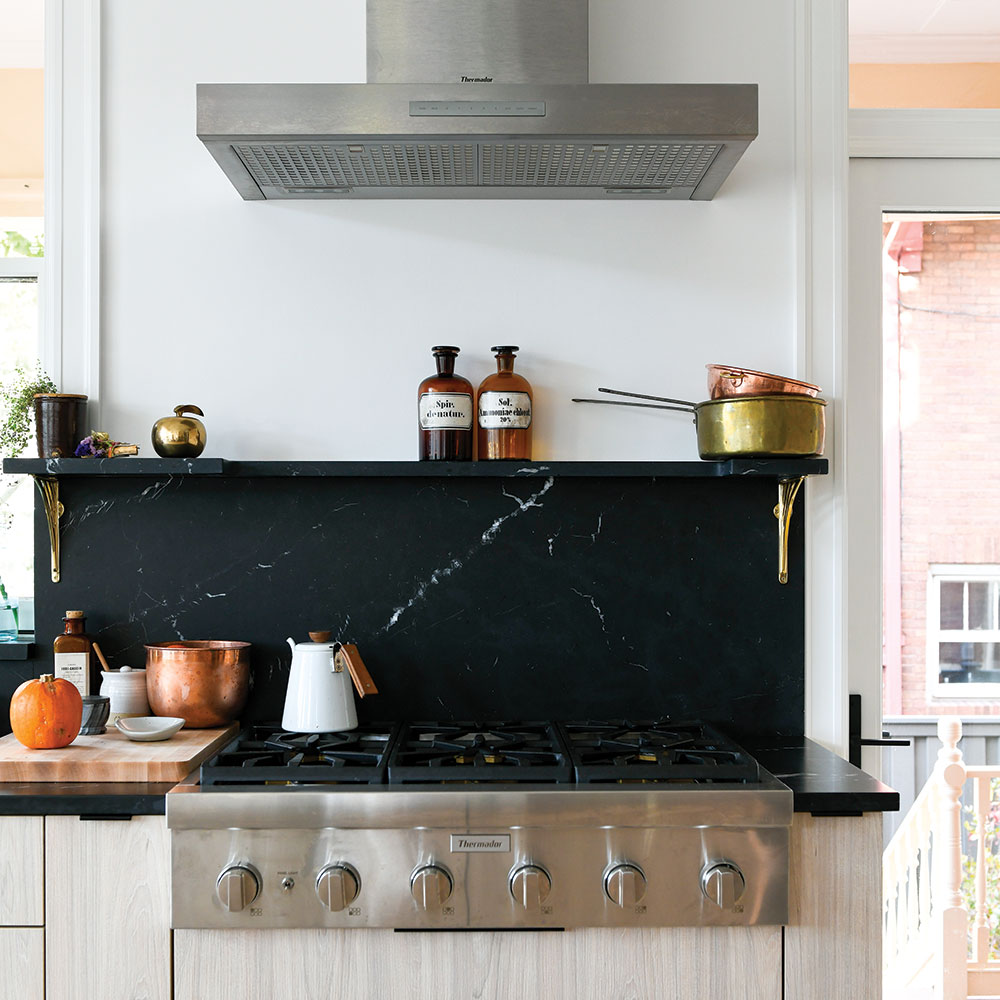 In mid-May, the contractors returned. By July, the project was finished.

For the sleek and modern kitchen, Aversa and McAdams partnered with Jacob Evans Kitchen & Bath out of Pittsburgh’s West End; owner Michael Bonato called the project a lot of fun.

“It’s great to work with people who have an eye for design,” he says.

While Bonato says Pittsburgh typically is more of a traditional market stylewise, Aversa and McAdams mixed things up by choosing a highly textured wood-look laminate in a beachy whitewash from Mouser’s Terra Collection for the cabinetry. The raised cabinets also include two pullout drawers with built-in bins specially designated for their pets’ dog food.

In another departure from tradition, the couple chose a dramatic black marble with white veining for the countertops with an unusual high-hone finish.

Aversa and Bonato agree it took some experimenting to get the finish — which dialed down the marble’s glossiness — just right. 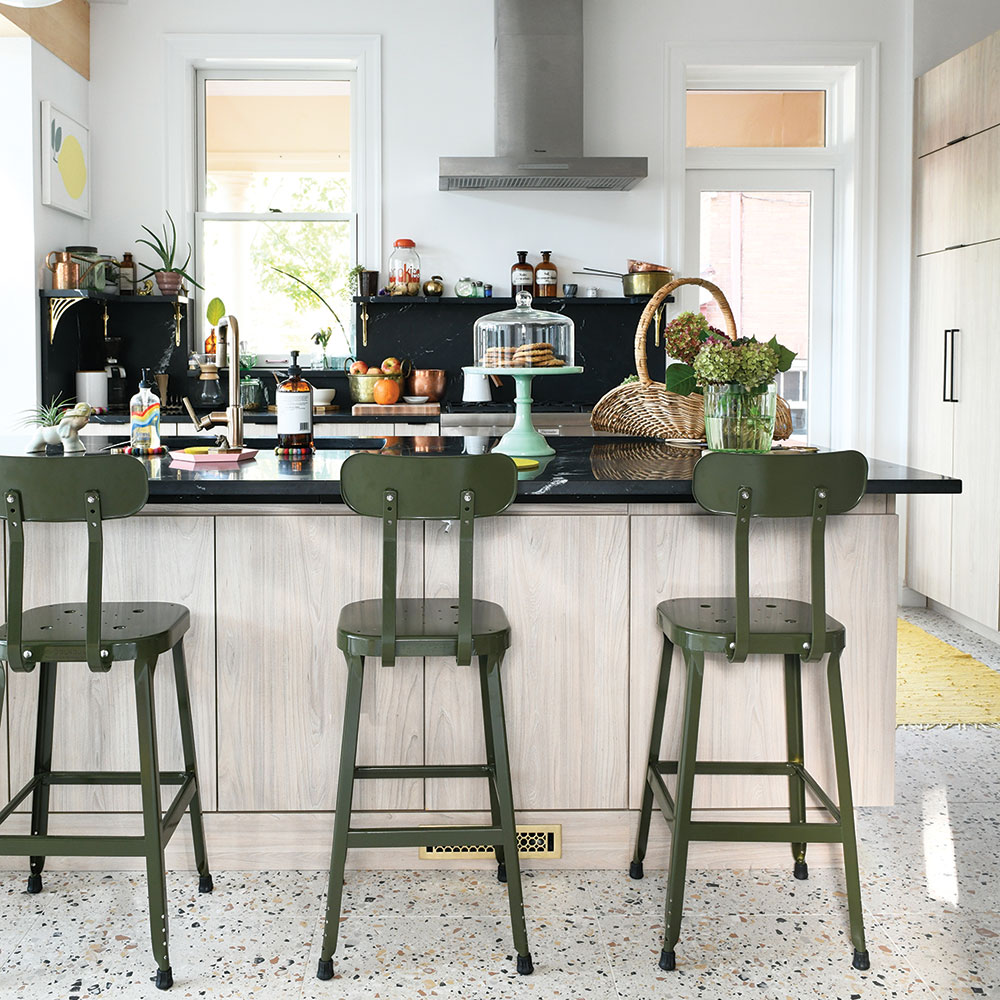 “The problem with dark countertops is when you remove some of the finish, you lose some of the color. It was looking gray,” Aversa says of the marble, which came from Pittsburgh-based supplier Primo Marble & Granite. “The high-honed finish had the right color and texture for me.”

While Aversa chose the same marble slab for the backsplash, he deviated from the norm with a “half-splash” wall topped with a shelf where he could display his kitchen wares.

“Shawn was unique in that he liked his accessories on the counter,” Bonato says. Hanging over the island — which is lined with sergeant green stools ordered from School House in Portland, Oregon, after the East Liberty location closed — are Von Walter & Funk’s pendant light fixtures that Aversa creates himself using mid-century globes and custom color cords. To give the room more dimension, one globe is 16 inches in diameter while the other is 12 inches and hung at a different height.

For the flooring, the couple chose a speckled white, matte-finished tile by Del Conca that was imported from Italy.

“It ended up being the number one element in the room,” Aversa says. “It’s great for dog hair.” 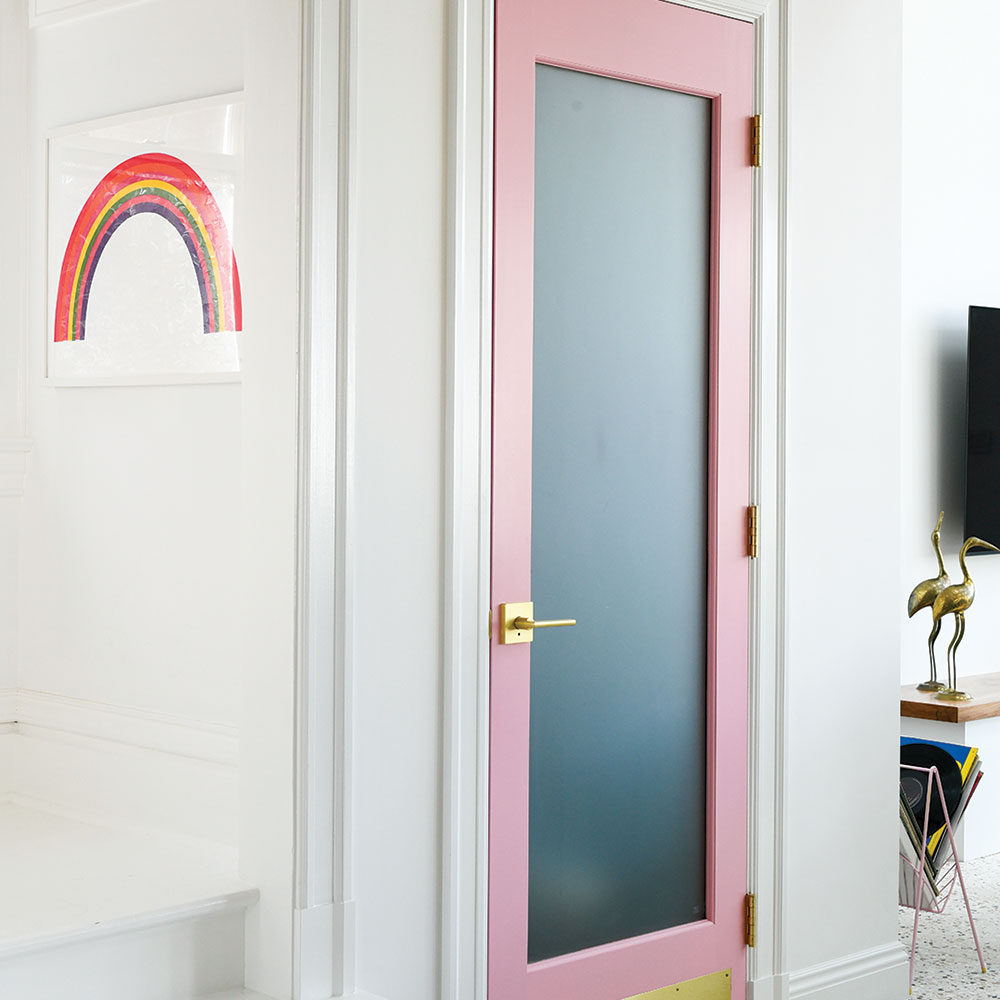 Aversa’s eclectic style carries over to the rectangular California room, which he renamed the “Rainbow Room” after he applied a vinyl rainbow decal he made himself onto one of the white walls.

Adding more pops of color is a pair of vintage, 19th-century Bergere chairs reupholstered in a bright periwinkle cotton velvet and a retro gas Malm fireplace in a cheerful turquoise color that gives the room a Nordic vibe. Under the television, which has cleverly hidden wires, is a handcrafted wooden bench top by Pittsburgh’s Urban Tree that also adds an earthy element to the room. 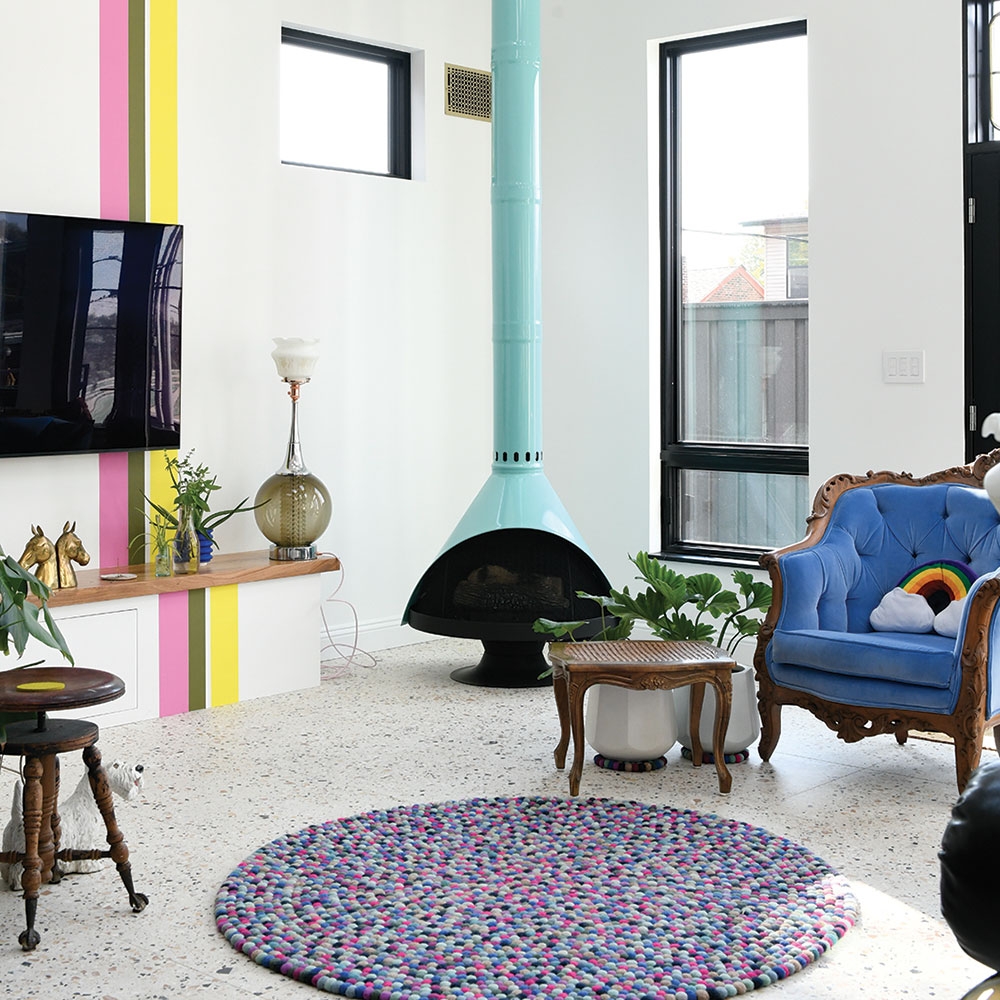 Aversa says he and McAdams have spent most of the pandemic cloistered in the bright, airy new space, which has a way of lifting their spirits.

“Thank God we have this now,” he says. “We’re like in this big bubble.” 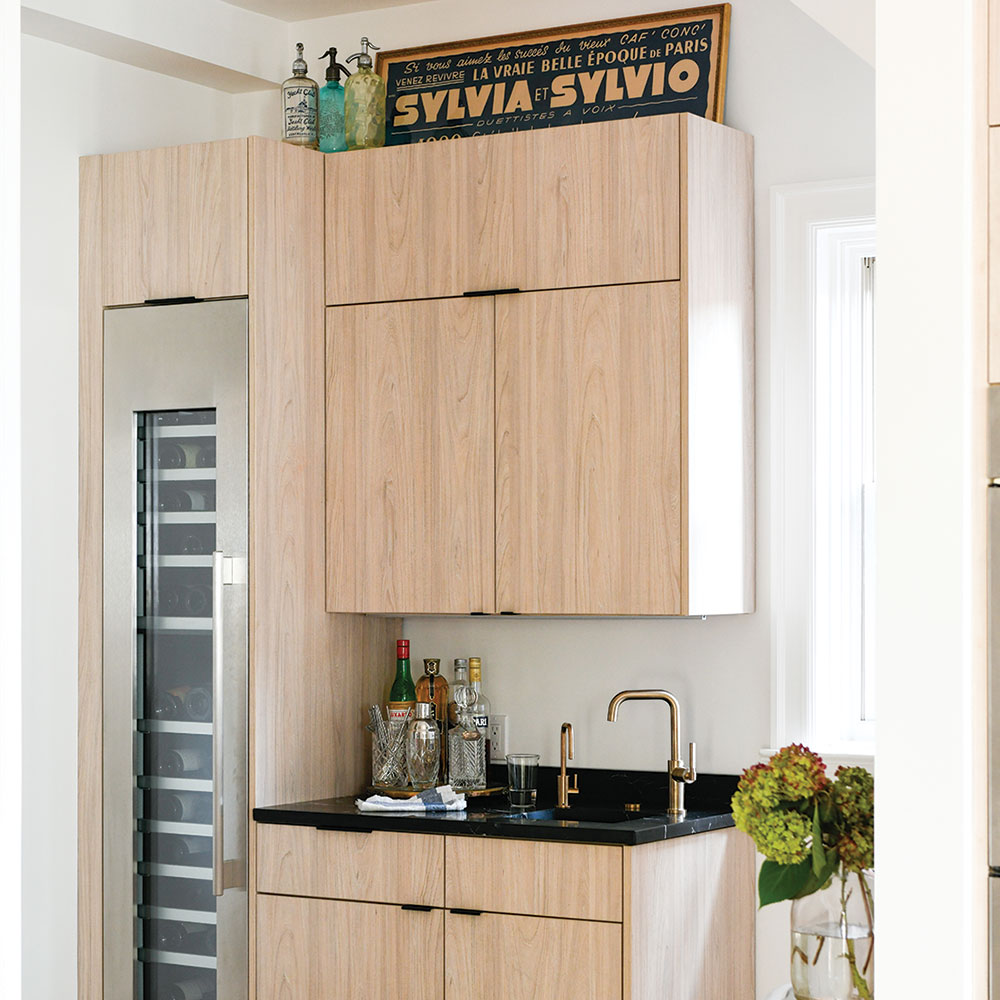 Paint: Chantilly Lace by Benjamin Moore (walls, ceiling, trim) and In the Pink by Sherwin Williams for the pantry door

This article appears in the Jan/Feb 2021 issue of Pittsburgh Magazine.
Categories: From the Magazine, HOME + Design, Hot Reads

Why the "Mushroom House" is Rooted in Pittsburgh History

5 Local Antique Shops Worth a Visit