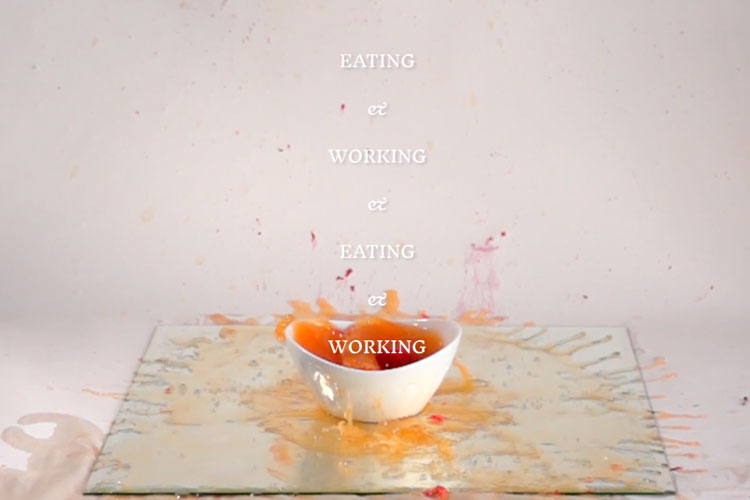 Here's what the majority of people think when aiming to decide where they want to have a restaurant meal: Is the food good? How far away is it from my house? Will I leave full? Are they nice to me?

Unseen and unthought about are the hours of physical and emotional labor that go into preparing and serving the meal, and, deeper than that, the layers of systemic racism as well as the gender- and race-based discrimination and harassment of employees that long have plagued the restaurant industry.

The multifaceted artist David Bernabo aims to address these issues in his film “Eating & Working & Eating & Working,” an 85-minute documentary released earlier this year. "It's a little behind the scenes right? Food is upfront and so are drinks. You're going there [to restaurants] to be entertained to some extent, so you don't want to think about the mechanics of how it's done,” he says.

“Eating” is Bernabo’s fifth food-related film. His four-part series, Food Systems, explores various aspects of Pittsburgh’s food culture by examining its restaurant history, its farms, home cooking and food insecurity. "I the idea of labor was lingering through all the other films. This was a chance to go deeper around all those subjects — labor, sexism and systemic racism,” he says.

The film reveals itself in duel, overlapping structures. Bernabo follows a series of restaurant industry professionals, including Oraphan Witayaprechia-Anan of Thai Gourmet, Curtis Gamble of Station, Gina Merante of Linea Verde Green Market and Jasmine Cho of Yummylicious from the start to finish of their work days.

He divides the day into 13 chapters: “Everything is About Labor,” “Both Mental and Physical,” “My Mom Thought of the Name,” “Mental Labor,” “Left Elbow,” “Small Tasks,” “All Things Yummy,” “Sexism,” “Racism, Ownership and Redlining,” “I Was Thinking About Candy,” “Wage Labor, Using the Example of the Household Economy,” “If You Think That Capitalism is Problematic,” and “‘Argot,’ by Fred Shaw.” Scholars such as Alice Julier of Chatham University, thought-leaders including Liana Maneese of The Good Peoples Group and Nicole Battle, president of the Pittsburgh chapter of the United States Bartenders Guild, as well as journalists such as Celine Roberts of Pittsburgh City Paper add their voices to the narrative.

Bernabo crafts a thoughtful, meditative piece which encourages viewers to think beyond the glitz and glamor of buzzy tasting menus and chef awards. Instead, he prompts diners to examine the cultural, emotional and physical labor, the mental health and self-care needs and racist and sexist burdens that those who work in the restaurant industry face while helping customers have a fun night out. “It’s hard to value labor if you think it didn’t take much to make that,” Julier says late in the film.

After watching “Eating," it's likely you'll value labor — and all the issues that surround it — the next time you visit a restaurant. Bernabo’s film is available on-demand at Vimeo, and he also hosts occasional screenings.