The bridge suffered a structural failure toward its west end, according to a new report by the National Transportation Safety Board. 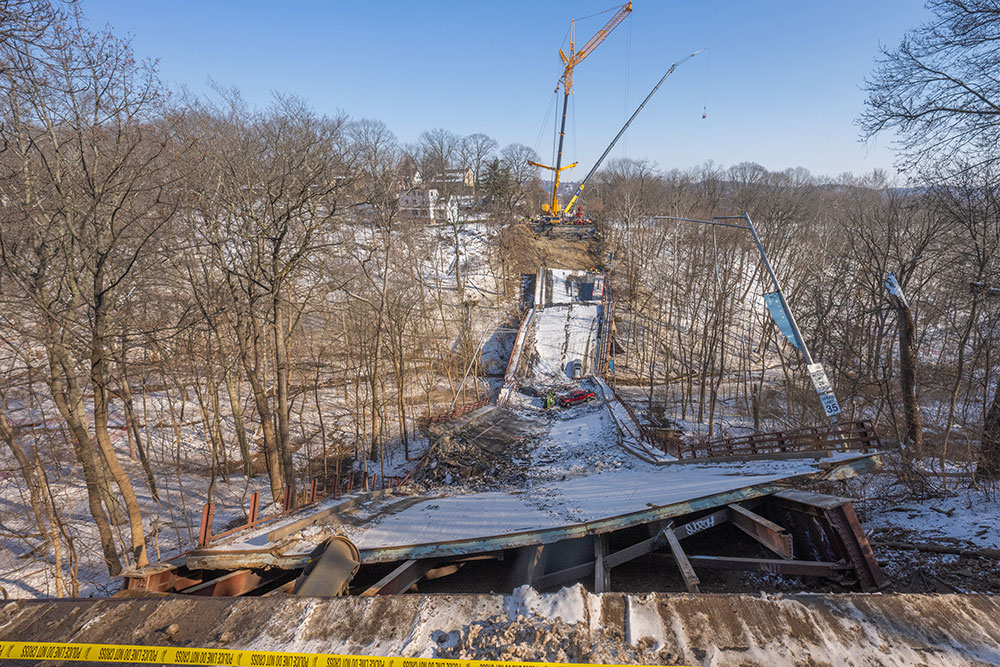 It’s been more than a week since the Fern Hollow bridge in Frick Park collapsed, injuring 10 and detouring traffic and bus routes throughout the city’s East End. Still, experts continue to investigate the cause of the collapse as crews clear away the debris.

Monday afternoon, the National Transportation Safety Board released a preliminary report exploring the potential cause of the collapse, although it could still be months before any final conclusions about what made the bridge fall are released.

The NTSB said the bridge experienced a structural failure around 6:40 a.m. on Jan. 28. As a result of the failure, the 447-foot long bridge fell about 100 feet into the park below. Reports show that the failure occurred on the west — or Squirrel Hill — end of the bridge.

The bridge was an uncoated weathering steel, three-span, continuous rigid “K” frame structure with two welded steel girders, welded steel floor beams and rolled steel stringers, according to the report. The ends of the structure rested on reinforced concrete caps on stone masonry abutments. Each girder was additionally supported by two inclined, welded steel frame legs, also made of uncoated weathering steel, which rested atop reinforced concrete thrust blocks. Although certain areas of the welded steel girders were identified as being fracture critical, no primary fractures were found in these areas.

Uncoated weathering steel refers to a group of steel alloys that are designed to, over time and with exposure to weather, form a protective patina that negates the need for painting. A “fracture critical” member refers to a part of the bridge whose failure would probably cause a portion of or the entire bridge to collapse, according to the report.

The examination will continue as debris from the bridge is removed and unobstructed access becomes available; there are still parts of the wreckage that crews can’t access because of the rubble that fell into the ravine.

The agency is also reviewing camera footage from the Port Authority bus that was crossing the bridge at the time of the collapse. It was equipped with seven cameras: one forward-facing camera, one right-side rear facing camera and five interior cameras.

Also taken into consideration by the NTSB is the design of the bridge, its condition at the time of the collapse, its maintenance and rehabilitation history and its inspection and load-rating history. The NTSB will conduct a forensic examination of some of the bridge’s structural components as the investigation progresses. The bridge had received a “poor” rating, according to PennDOT. It was one of 80 county-owned bridges to receive such a rating. There are 96 state-owned bridges with a “poor” rating, too.

“The recovery of evidence, including extraction and documentation, is expected to be a lengthy process,” the report concludes. “All aspects of the collapse remain under investigation while the NTSB determines the probable cause, with the intent of issuing safety recommendations to prevent similar events.”