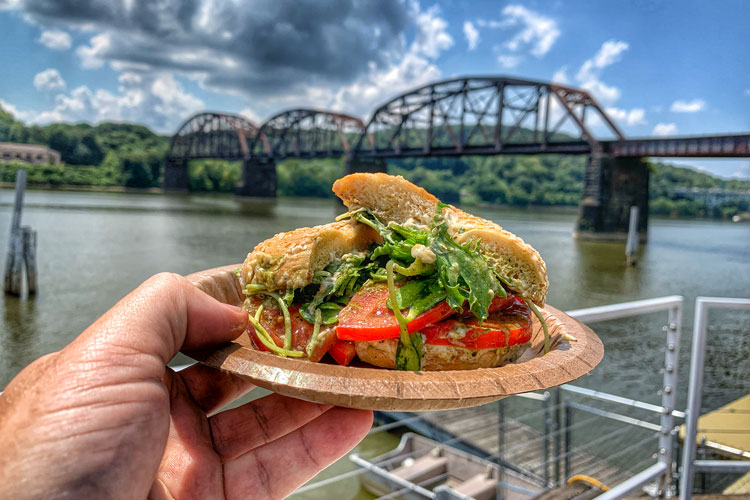 There aren't a lot of riverfront dining options in Pittsburgh, and, by and large, the food served at those establishments isn't very good. Jennifer Urich intends to brighten the dire waterside landscape with her new BYOB restaurant, Farmer x Baker, which opened last week in the utterly charming Aspinwall Riverfront Park.

“I’ve lived here for 20 years and was always searching for great places to eat by the water. I felt like I found that when I walked into this park,” she says.

The establishment's name combines two of Urich’s passions: the former landscaper owns Root and Heart Farm in Gibsonia and has for years baked bread as a hobby. She says her baking is influenced by her father’s Hungarian Jewish heritage and her mother’s French roots; previous generations of her family worked as professional bakers, too.

Urich is planning on using her bread — bagels, flatbreads and biscuits are part of the initial lineup — as a showcase for produce, cheese and meat raised within 30 miles of Pittsburgh (flour, however, comes from Central Milling in Utah). In addition to vegetables and edible flowers from Root and Heart, she currently is working with Tiny Seed Farm, Dillner Family Farm and Freedom Farms. “It’s simple comfort food, sourced really well,” she says.

Urich started selling bagels in the park last autumn and now, along with Jesse Barlass (Colonia at Smallman Galley, Station), is offering a straightforward, ever-changing menu of tasty seasonal cuisine. Last week, for example, you could find a bagel with heirloom tomato, basil and greens, a baguette with ham, arugula, onions, cucumbers and herb aioli and farm greens shakshuka, among other breakfast and lunch dishes; Urich also plans on rolling out a Sunday evening dinner menu this weekend. “The baked goods are the vehicle for whatever is seasonal. Other than that, we’re not going to set any parameters or any theme for what we’re serving,” she says.

The base of operations is an upcycled 160-square-foot shipping container. Urich, who has experience as an architect and contractor, believes she’s the first person in the region to rehabilitate one into a fully functioning commercial kitchen. “It’s an awesome thing to be able to build a kitchen and open a restaurant for $80,000,” she says.

The setting is a hidden gem (for most of us), too. Aspinwall Riverfront Park is a tranquil, 10-acre space peppered with comfortable seating, a dog park, a pleasant marina and mellow areas for reading. The addition of this charming BYOB eatery makes the park an even more delightful destination. “I’m so excited to create a space where people can unplug and be by the water. It’s calming here,” Urich says. 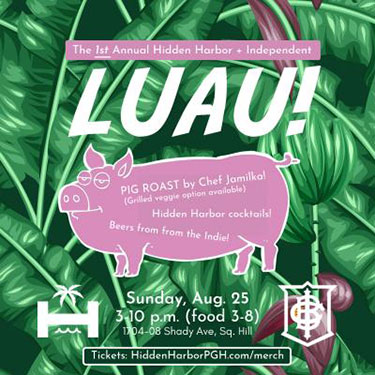 In Other News: Hidden Harbor and the Independent Brewing Company are throwing a luau on Sunday, Aug. 25. Former big Burrito chef Tim Eelman, now working at Marla in San Francisco, is returning to town to team up with Independent Hospitality Group executive chef Jamilka Borges for a Puerto Rican style pig roast. Their menu will feature whole-hog barbecue, paella and “fixins galore,” and bars will have drink specials (as well as their excellent day-to-day offerings) to pair. Tickets are $25 for a large plate of food.