Events including al fresco fashion and art installations are planned for the city’s staircases. 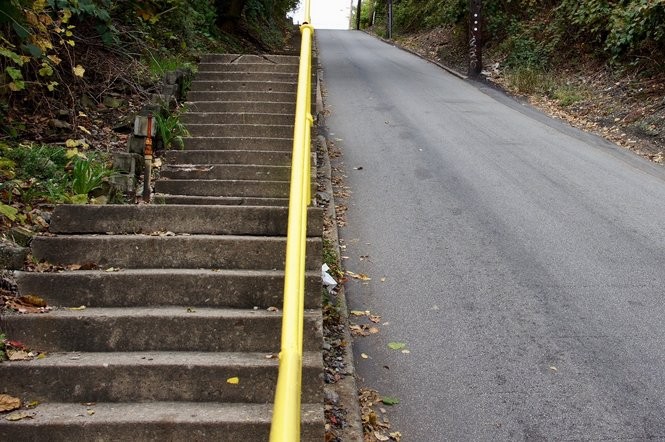 With around 800 sets of steps, Pittsburgh has more public staircases than any other city in the United States. These staircases are often found in underserved communities in which the hills are steep and the public transit options are scarce.

Starting on Friday, Oct. 4, Bike Pittsburgh (BikePGH) and the Office of Public Art will join forces for a new event series aimed at celebrating the  city steps and bringing attention to the walkable connections between neighborhoods.

“The Steps We Take” will bring art and events to city steps in Polish Hill, the West End, Fineview and Troy Hill. Including work from artists, architects and community groups, the event series will include a fashion show and scavenger hunt on the stairs in the West End, an immersive audio tour with sound-activated lights leading up the Rialto Street steps in Troy Hill and several block parties and art installations throughout the four neighborhoods.

Landscape architects Merritt Chase, along with members of the Polish Hill Civic Association, will “temporarily transform Polish Hill’s city steps into vertical parks, activated by vertical parties between multiple city steps,” according to the event listing on BikePGH’s website. The vertical parties will include an evening block party along the Harding Way steps on Friday, Oct. 4, and a pierogi brunch between the Phelan Way and Paulowna Street steps on Sunday, Oct. 6.

The West End will become a fashion hub on Saturday, Oct. 5, thanks to artist Bradford Mumpower. Led by scavenger hunt clues, folks can travel the West End via city steps while looking for mannequins dressed in locally designed and created fashions. That afternoon, a fashion show featuring six local fashion designers will take place on the Sanctus Streets stairs.

Artist Gene Thompson, along with the Fineview Citizens Council, will organize two free events in Fineview on Oct. 11 and Oct. 12. The events, featuring communal wearable sculptures, aim to unite folks and bring people together in unlikely spaces.

In Troy Hill, an app will guide folks through an instillation of light and sounds starting on Oct. 10. Through an audio-based walking tour, participants will hear musical compositions and the voices of residents who live in the neighborhood telling their stories. Led by artists Danny Bracken and Erin Anderson, the app will remain active after the events conclude on Oct. 12.