Elements Contemporary Cuisine, located in downtown Pittsburgh, has the right ingredients for success, including meat, cheese and more.

In the past few months, we’ve seen a banner number of promising new restaurants open in the area. Among these is Elements Contemporary Cuisine, which premiered in late August with a very fine charcuterie offering wholesome, uncomplicated food, and a lively bar scene—all served in a sultry slate-blue and taupe environment.

Elements (with a stylized logo of earth, fire and water) occupies the space of the now-defunct Palomino in downtown’s Four Gateway Center, making it especially convenient for the after-work and pre-theater crowds. The space features tall ceilings, an open floor plan punctuated by large columns, floor-to-ceiling windows and a mix of booths and dark-wood tables—all redone in a moody palette of blues, grays and browns, resulting in an urbane, downtown vibe.

Elements was created by David Greenberg, a restaurateur from Cabo San Lucas, Mexico. He came to Pittsburgh because of the great opportunity here for new, interesting restaurants.

Greenberg believes in playing up the team’s strengths: Severino, in addition to having cooking experience, has a special background when it comes to butchery and meat preparation, resulting in the restaurant’s unique offering of “meat, cheese and more.” After graduating from the former Pennsylvania Institute of Culinary Arts (now Le Cordon Bleu) here in Pittsburgh, Severino worked at a number of highly esteemed California restaurants, including Marinus at Bernardus Lodge in Carmel Valley, Big Sur Bakery & Restaurant in Big Sur and Manresa in Los Gatos (under executive chef David Kinch).

While cooking at these prestigious places, Severino developed a special interest in using whole local animals. “I have a respect for the farmer and the creature—that means I want to use the whole animal and have no waste,” he says. This led him to become deeply involved in charcuterie, the French term for meat products such as sausage, cured meats, pâté and terrines. Eventually, he opened Severino’s Community Butcher in Santa Cruz, Calif., where he became a very successful purveyor of pork products to farmers markets and restaurants. 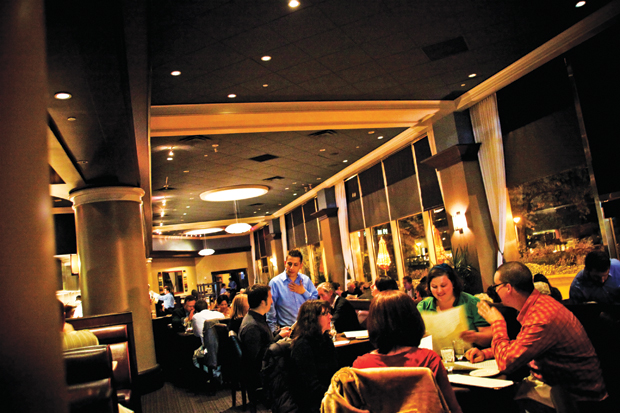 After deciding to return to Pittsburgh, Severino, who hails from Ohio, worked at Eleven and Casbah. He also worked as a product-development manager for one year at Ayrshire Farm in Virginia, where he launched its charcuterie product line.

So, after all of this, you will not be surprised to learn that the “meat, cheese and more” section at Elements is absolutely worth your time and money. There is a fascinating selection of about a dozen each of meats, cheeses and accompaniments (such as spreads, olives and prepared vegetables). These can be combined as you choose, starting at $9 for three items and going up to $95 for all items, or you can opt for pre-selected combinations of six items ($15) grouped by country or style of origin (American, Italian and Mediterranean).

Descriptions of the meats and cheeses are included in a detailed glossary (one that’s handed to each table of guests). The meats are, of course, all housemade. I recommend the duck speck—a dry, hard, smoked and salted sliced duck breast, or the lardo (cured pork fat).

Each cheese that I tried—like the crotin de chèvre—was carefully selected, perfectly ripe and served at the proper temperature. The restaurant’s goal is to develop enough local and regional sources so that over half the cheeses are from Pennsylvania.

As for the accompaniments, which are made in-house, I favor the white-bean puree, spiced almonds, olive tapenade, peach mostarda (mustard) and charred radicchio. All are served with Allegro Hearth breads (from the Squirrel Hill bakery).

The main menu is divided into pizza, small plates, soup & salad, entrées and a daily tasting menu that offers seven courses for $70.

The wood-fired pizzas are made with homemade dough and are very popular with the after-work crowd, says Severino. Try the homemade Blackstrap ham pizza ($7).

Under small plates, the sea scallops ($12) selection comprises three very large seared scallops served with chestnut pesto, bacon and apples; it is a very successful complement of flavors. Unfortunately, the romaine salad ($9), with a soft-cooked egg, capers, roast peppers, anchovies and manchego cheese, made for an imperfect combination of flavors and was sloppily presented.

Look for about a dozen choices for entrées, with a few dishes each of pasta, fish, pork, chicken, lamb and steak. I like this menu because when I dined with four people who had varying preferences that suited each individual’s taste.

Eggplant-parmesan manicotti ($20) stars delicate, light pasta enhanced by a fluffy eggplant, ricotta and taleggio-cheese filling. It sits in a pool of creamed spinach, giving you a feeling of richness but without the heaviness you might expect. Another good choice is the flat-iron steak ($27). Mine was a perfectly cooked, tender steak served with smoked fingerling potatoes, wild mushrooms and spinach and was accompanied by traditional horseradish cream.

Now, about the desserts, produced by pastry chef Barbara Ferguson (also formerly of Mio). Unfortunately, they are the weakest element here. The best selection I sampled is the yogurt panna cotta ($7)—creamy and thick with a refreshing, tangy yogurt taste. On the other hand, the vanilla bean crème brûlée ($6) was so watery that it was taken off our bill after our complaint.

The apple tart ($6), attractively served in a pewter crock alongside maple ice cream, is average at best.

The drink list is extensive and includes specialty cocktails ($10), draft and bottled beer, more than 30-plus types of vodka, more than 30 types of scotch and whiskey, brandies, cordials, liqueurs and ports. Elements is definitely a place to go for a drink.

As for wine, in addition to full bottles, Elements offers 30 wines by the half bottle and more than 20 wines by the glass, allowing you to affordably vary your wine with each course.

The atmosphere inside this restaurant is warm and inviting, the service friendly, and the food worthwhile. And make absolutely sure you try “meat, cheese and more.” That offering alone is worth the trip—and more.

This article appears in the December 2010 issue of Pittsburgh Magazine.
Categories: Restaurant Reviews