The University has attempted to restrict the event after it received complaints that aspects of the show were in conflict with the university’s “Catholic mission.” 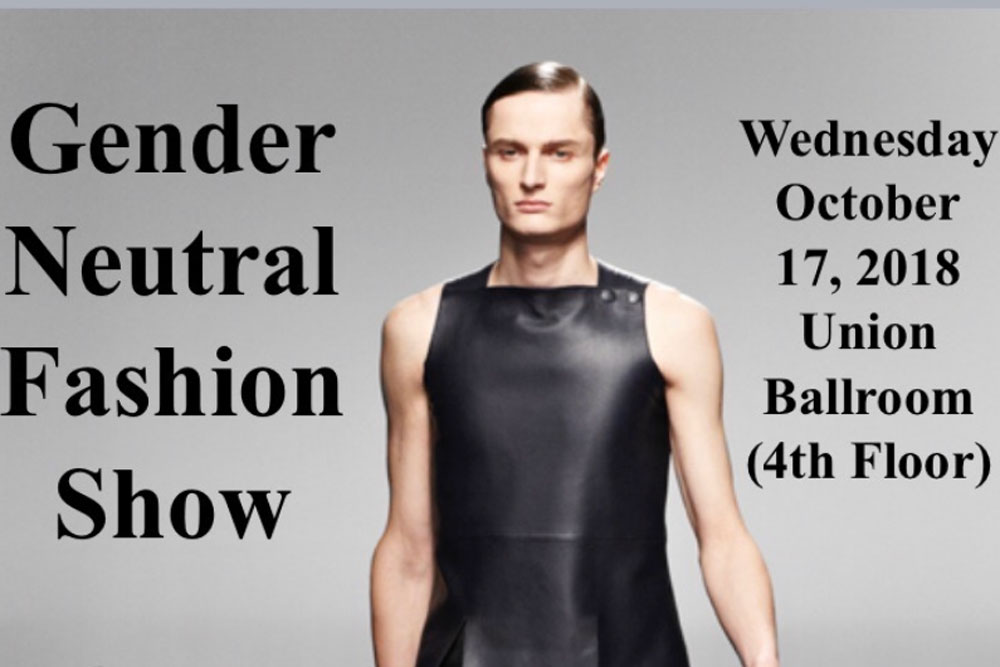 A PORTION OF THE POSTER FOR LAST YEAR’S GENDER NEUTRAL FASHION SHOW AT DUQUESNE UNIVERSITY.

UPDATE: On Oct. 3, The Duke reported that Duquesne University has reversed its stance against gender neutral language amid massive backlash from students, faculty and community members. The Gender Neutral Fashion Show will take place on Oct. 23, featuring a panel discussion and a runway walk showcasing student models.

A version of this story appeared in the Sept. 26, 2019, edition of the Duquesne Duke.

Last year, Duquesne University’s Gender Forum co-hosted a “Gender Neutral Fashion Show” with the Department of Women and Gender Studies, but an attempt to repeat the show this October has run afoul of the administration.

Officials in the university said that due to complaints they received about a 2018 poster featuring a male-presenting runway model in a dress, they would require that this year’s show refrain from using gender neutral language and photographs similar to the one on last year’s poster.

Many members of both the campus and local communities expressed discouragement and anger by the resistance to the fashion show’s theme.

“It blindsided all of us,” Gender Forum President Emma Shirey says. “No one had said anything about it being problematic.”

An official statement signed by Kristine Blair, dean of McAnulty College, and Darlene Weaver, associate provost for academic affairs, was sent in response to Duquesne Duke inquiries and referenced the university’s Catholic mission.

“No matter what group seeks to use university resources for programming, Duquesne University has consistently required that it show respect for the Catholic religious identity of the institution,” the statement reads. “Faculty, staff and students share in Duquesne University’s Catholic and Spiritan mission, and therefore have a common responsibility to develop programs and events that foster academic rigor and align with our core values.”

The statement went on to say that “the posters advertising the event generated numerous complaints from a variety of students, faculty and alumni.”

The controversy comes soon after Pittsburgh native Billy Porter, who has generated buzz for the gender fluid styles he has worn on the red carpet this season, made history with his Sept. 23 Emmy win — Porter became the first openly gay black man to take home the award — and a time when gender neutrality is increasingly mainstream.

Multiple people with direct knowledge of the situation who wished to speak off the record say the complaints are coming from the Pittsburgh Diocese.

Greg Barnhisel, who has been the chairman of the English department at Duquesne for the last six years and the director of freshman writing for 10 years before that, corroborated those accounts.

“I heard that some of these complaints originated from outside the university, even with the office of the bishop and Bishop Zubik himself. Also with donors,” says Barnhisel. “It is not appropriate for the office of the diocese and donors to have any say in what is fundamentally an academic program.”

In a statement issued to Pittsburgh Magazine, the Catholic Diocese said, “Last year Bishop Zubik received several complaints about the advertisements for a gender neutral fashion show at Duquesne University. The diocese referred the complaints to the university out of concern that the event, as advertised, did not reflect Catholic teaching on gender. Our Catholic faith teaches that gender is a gift from God.

“Neither the bishop nor diocesan staff instructed the university on what action to take, but it is the responsibility of all diocesan bishops to remind every Catholic institution in their diocese that Catholic institutions have an obligation to reflect Catholic teaching. God loves everyone, including the students involved in the fashion show, but not all events are appropriate for sponsorship by a Catholic school.”

Laura Engel, a professor in the WGS department who spoke at the academic panel that preceded last year’s fashion show, says it was the best-attended WGS event she’d experienced. She was confused when she heard from her colleagues that the event was facing backlash.

“The runway walk was people wearing clothes that you would see people wearing every day. This was not a costume show; this was a show about people just walking and saying hello and being appreciated for how they wanted to present themselves,” she says. “It was really one of those special moments at Duquesne.”

Engel says the initial pushback from the administration could send a negative message to students. “Students need to feel safe and know that they have allies and advocates.”

In the statement, the university says that it never cancelled or banned the event. Rather, Blair and Weaver wrote that, before approving space and resource allocation for the fashion show, “[the university] has sought to determine that the program is academically-focused and that promotional materials are not designed in a fashion that will unnecessarily offend others.”

They also say that the issue is just now coming to light — 11 months after the previous event — because of leadership changes and staff turnover in other offices. Blair and Weaver both began their tenures in July.

On Sept. 25, faculty of the WGS department met with university administration to discuss an alternative event. At that meeting, according to Linda Kinnahan, professor of English and founding member of WGS, the Gender Forum was cleared to hold an event similar to last year’s fashion show, as long as it abided by the restrictions outlined by the university — eliminating “gender neutral” and similar language and refraining from using images that the university could consider offensive.

“It’s our understanding as of today that we can proceed with an event,” Kinnahan says. “But we’ve been told that the image [on the poster] was a problem in combination with the language, particularly the term ‘gender neutral.’”

Kinnahan and other faculty members also worry about the possible implications of the university putting limitations on what words can or cannot be used in an academic setting.

Stew Frick, a nonbinary local fashion designer, does not attend Duquesne but was set to repeat as featured designer at this year’s show. Frick was “really disappointed” in the reaction from the administration.

“The offer of putting on a show while simultaneously eliminating the original purpose of having a gender neutral fashion show — to signal to queer students that they are welcome, accepted and that they have the right to feel secure in the clothes they choose to wear — fills me with disappointment and sadness for the queer students of Duquesne,” Frick says.

“Not only has the administration shown that they are unwilling to weather a few homophobic complaints about a completely school-appropriate poster, but they are also willing to erase those same queer students’ identity while trying to pose that same erasure as an olive branch, a compromise.’”

The Gender Forum and WGS department has decided to move forward with the show, slated for its original date of Oct. 23.