The Duquesne Dukes men’s basketball team opened the season with a lengthy undefeated streak, despite lacking a home court. 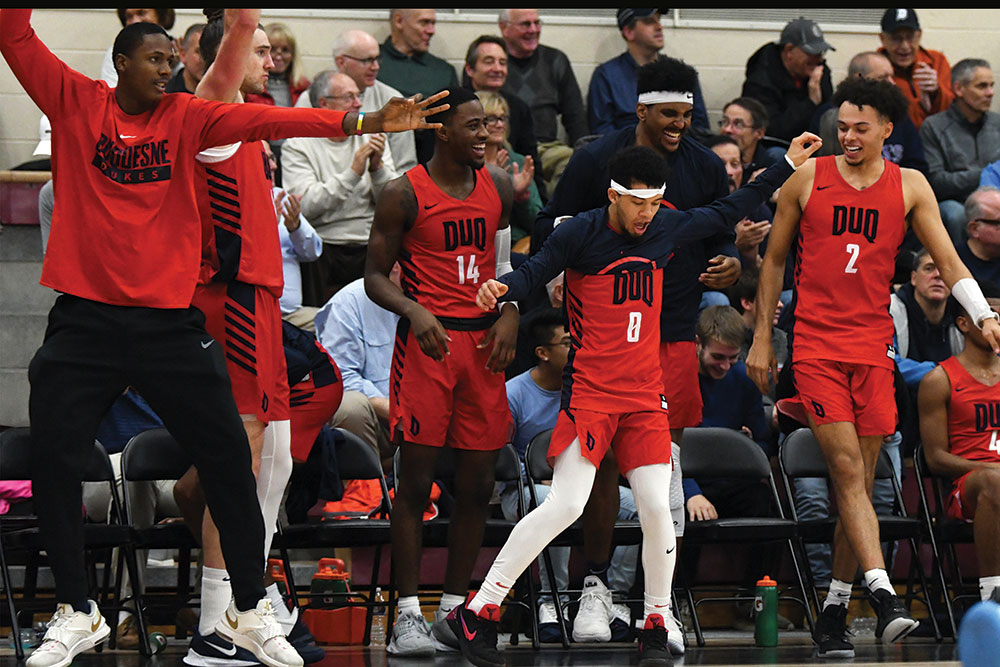 The Duquesne Dukes men’s basketball team began the season by making one thing clear: They don’t need their own court to win.

Sure, the Dukes will be happy to return to the reborn UPMC Cooper Fieldhouse, currently in the midst of an extensive rehabilitation (and a name change — it’s the Palumbo no more), for the 2020-21 campaign. But alternating between three temporary local courts and a series of neutral sites didn’t stop the surging Dukes from opening the season with a historic 10-0 record.

On Dec. 21, the day of their 10th straight victory, the Dukes found themselves in fine company as one of only four undefeated Division I teams in the country, alongside Auburn, San Diego State and Liberty.

The Duquesne men’s team hasn’t started a season with 10 consecutive victories since 1953. There’s a bit of synchronicity there; the Dukes of 1953-54 fielded a guard named Sid Dambrot, father of the team’s current head coach, Keith Dambrot. That team would eventually reach the top of the Associated Press rankings.

The Dukes’ streak began with a 94-67 drubbing of Princeton in the season opener, held at PPG Paints Arena — one of three local hosts for Duquesne basketball this season, along with La Roche University and the new UPMC Events Center at Robert Morris University. The run also included an undefeated performance in the Junkanoo Jam, a round-robin tournament held annually in the Bahamas; Duquesne bested Indiana State, Air Force and Loyola Marymount over the course of the four-day competition.

While the streak ended with a Dec. 22 loss to the University of Alabama at Birmingham, the Dukes are looking to post their second consecutive winning season under Dambrot after a 19-13 campaign in 2018-19. This month’s home contests include a Feb. 19 matchup with George Washington at PPG Paints Arena — the second half of a Duquesne doubleheader, with the women’s team taking on Rhode Island earlier in the evening — and a Feb. 29 tilt with formidable George Mason at the UPMC Events Center.

This article appears in the February 2020 issue of Pittsburgh Magazine.
Categories: Sports, The 412