Get over to Burgatory: For a limited time the team will whip up a "heavenly shake" that tastes like St. Patrick's Day in a glass. 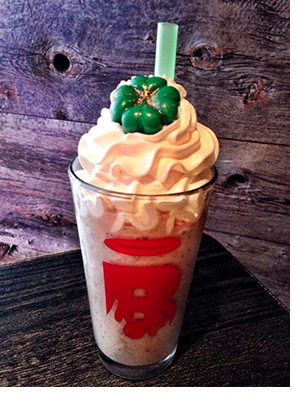 GET ONE OF BURGATORY’S MINT SHAKES
Once again, a major fast-food franchise is running promos for its seasonal milkshake, tempting those with a sweet tooth. There's an alternative: Through Monday, Burgatory will be serving its mint shake. Staffers blend house-churned vanilla ice cream, chocolate syrup, housemade mint syrup and Thin Mint Girl Scout cookies and place a mint-chocolate shamrock atop the swirls of whipped cream. If you’re in the mood for an adult beverage, get yours spiked with chocolate vodka.

(Shake served at the Waterworks and Robinson Township locations; burgatorybar.com)

Favorite bar gadget?
The jigger for measuring because you want to be pretty accurate when making specific cocktails.

Drink of 2014?
I feel like a lot of people are doing tiki drinks — especially with rum coming from local [companies] . . . Rum mainly is used to create tropical drinks.

Mixing tip?
I never knew this existed with an egg-white drink — [but you should] dry-shake ingredients first to get the whites foamy. Then do an ice shake.

APONTE FOOD TRAILER OFFERS ‘LATIN FLAVA’
Hector Aponte is no stranger to the restaurant industry. The Florida native grew up observing the “world’s best cooks” — his mother and grandmother — in action. He worked his way up the ranks at his family’s eatery and eventually operated a food trailer. Aponte relocated to Pittsburgh about two years ago and established a food trailer last year, from which he serves such Puerto Rican classics as empanadas and bacalao patties. Find Aponte’s Latin Flava in the Cultural District at lunchtime Tuesday through Friday and at various regional events, including the food-truck roundup set for Sunday.

Keep track of the region’s food trucks by reviewing our @PGHmagEAT feed.

This article appears in the March 2014 issue of Eat Street.
Categories: PGHeats