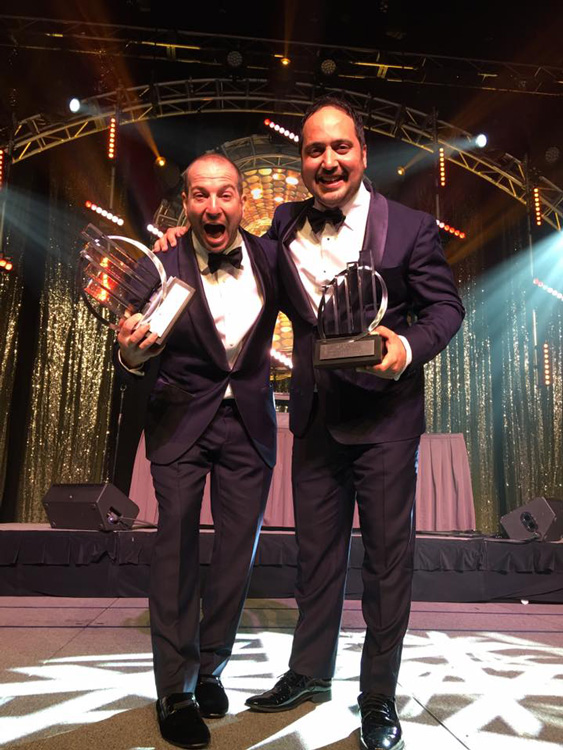 Richard DeShantz and Tolga Sevdik of the Richard DeShantz Restaurant Group have been named the western Pennsylvania and West Virginia regional winners in the “service” category of the EY Entrepreneur of the Year awards. The award program, sponsored by Ernst & Young, recognizes business owners who, according to the awards website, “create the products, services and jobs that help our economy and communities grow.”
​
DeShantz — the restaurant group’s executive chef — and Sevdik — the group's general manager — began influencing the Downtown restaurant community when they opened Meat & Potatoes in 2011. In addition to Meat & Potatoes, the duo operates Butcher & the Rye and täkō, and are expected to open a fourth Downtown restaurant, Pork & Beans, by the end of the summer (they currently are waiting on final inspections). DeShantz also recently announced that the restaurant group has purchased the space previously occupied by Salt of the Earth restaurant and expect to open two restaurants in that location in 2017. The company currently employs over 300 people.

"We never could have done this without our management team, our staff and our business partners. It's not just Rick and I that won this," says Sevdik.

The other regional winners for the Entrepreneur of the Year award are: Nicholas Ambeliotis, founder and CEO of Mediterra Bakehouse, for Distribution and Manufacturing; Wei-Shin Lai, CEO of AcousticSheep, for Retail and Consumer Products; Gabriela Isturiz, president of Bakersfield Systems LLC, for Emerging; Jason Lange, CEO of BloomBoard Inc., for Technology Services; Dr. Todd Wolynn and Dr. Albert Wolf, CEO and CFO of Kids Plus Pediatrics, for Healthcare; Luke Skurman, CEO of Niche.com, Inc., for Technology Data Solutions; and Sergey Gorlov of Petrosoft, LLC, for Technology Software. Bill Flanagan, Chief Corporate Relations Officer of Allegheny Conference on Community Development, was awarded the 2016 EY Championship of Entrepreneurship award.

All the winners will move on to the national-level of the awards. Those winners will be announced on November 19 in Palm Springs.