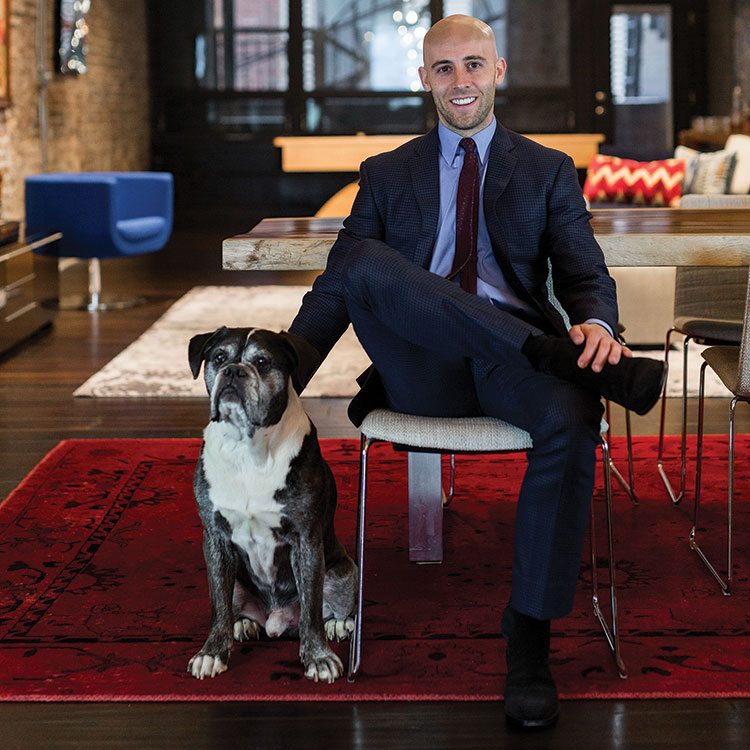 Matt Monsour has a history of knowing what he wants.

When the partner at the Pittsburgh office of the McGuireWoods law firm was looking for a new place to call home close to a decade ago, he was determined to live Downtown, despite advice from his family that he’d be better off with a nice home in the suburbs.

“They warned me against it,” he says with a laugh.

But Monsour would not be swayed. Downtown — which at the time had few residential options — was where he wanted to be, and cookie-cutter style condos were not an option for him.

Monsour, now 36, says he stumbled upon the perfect space, an industrial-style loft inside a 1870s-era building in the heart of Pittsburgh’s Cultural District, by accident while out walking his dog, Hugo — Monsour calls him his best friend — and noticed a for-sale sign on the building. 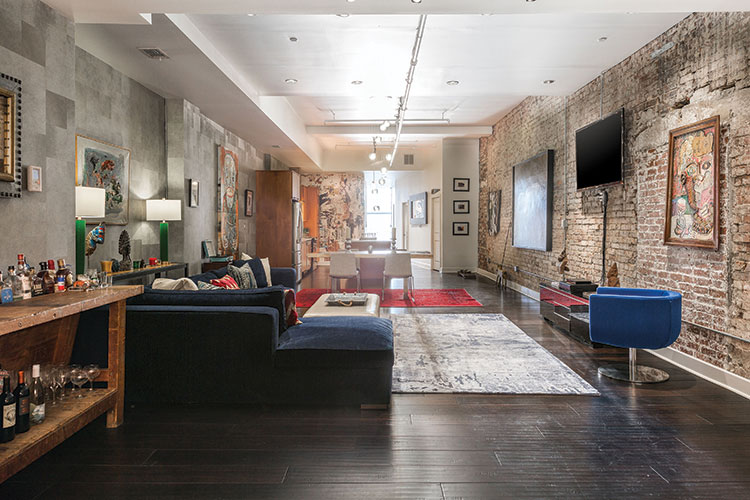 After his real estate agent learned HGTV was looking to document first-time homeowners searching for a place in the city, Monsour was cast in an episode of the network’s show, “My First Place.”

On the episode, which aired in 2011, Monsour was shown three places, despite the fact that he had recently fallen in love with, and was in the process of buying, his home.

“What’s always funny is, I purchased the place before I went on the show, so I had to act my way through the other two places they made me see,” Monsour says, adding the show’s producers asked him to play up his dissatisfaction with the other homes. “Obviously, I needed to rip on the other places a little because I already had my place.”

At the time, the building — which Monsour says he was told had been a printing company before sitting vacant for more than 50 years through several stalled development efforts — was little more than raw space. 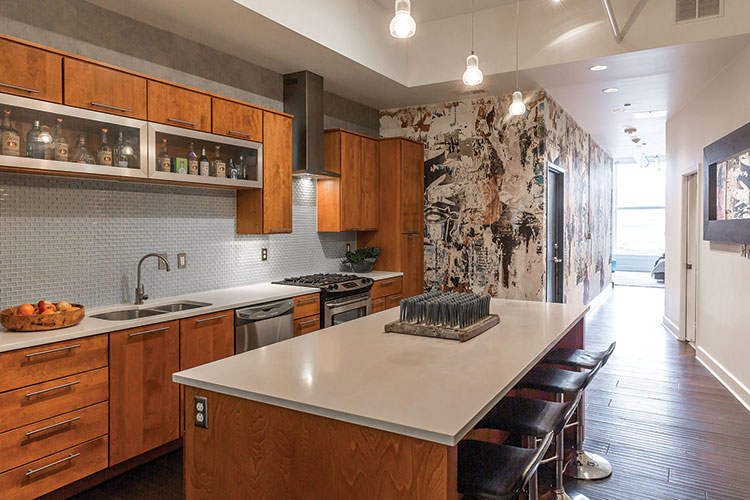 But Monsour could sense the potential. After purchasing the space, he had walls torn down, added a kitchen and exposed the loft’s brick walls. Inside, he outfitted the condo, which features 11-foot-tall ceilings and an enormous front window overlooking Penn Avenue, with a black couch from IKEA and a pool table — and that’s it.

“Those were the only things I had,” he says. “It was like a true college bachelor pad.”

After living there for a few years, Monsour brought in Sewickley-based Studio B Interior Design owner Betsy Wentz, who had designed his sister’s home on Beaver Street in the village.

“I really loved what she did in there,” he says. “At the same time she was doing my sister’s house, I saw her own house in [the March 2014 issue of Pittsburgh Magazine]. I thought, if I ever move to the suburbs, I want my house to look like this.” 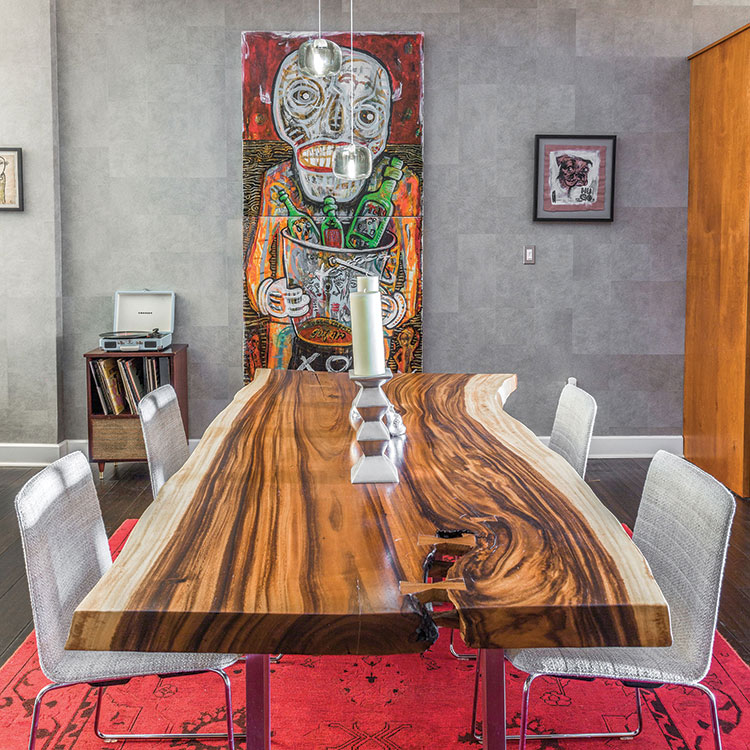 In addition to his couch and pool table, Monsour also had a major piece of art, a colorful 7-foot by 5-foot painting by noted Pittsburgh-born artist Rick Bach that affectionately is known as “Angry Man.”

“That painting just spoke to me,” he says.

Wentz, who loves to play with color, created a palette for the loft based around the painting, adding several one-of-a-kind rugs purchased in New York City, including a striking over-dyed red carpet that lies in front of “Angry Man” and below a live-edge dining table. To house Monsour’s impressive liquor collection, she found a vintage carpenter’s workbench. 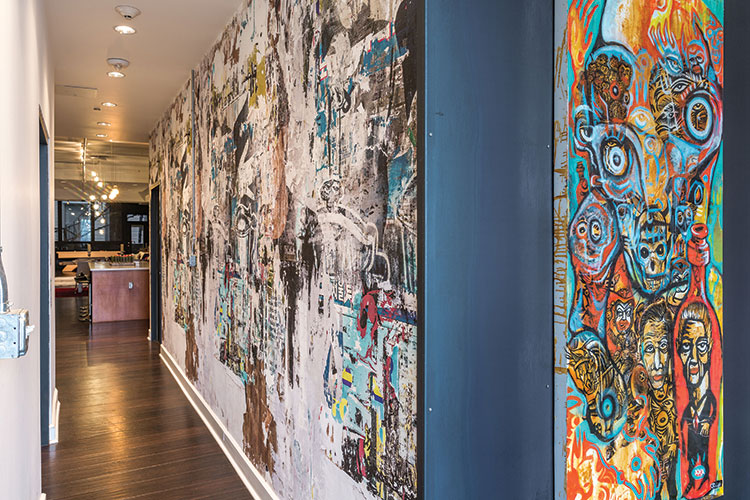 On one of the loft’s long walls, she installed a commercial-grade vinyl wallcovering textured with horsehair by French brand Elitis. On the wall opposite the elevator entrance, Wentz installed a graffiti mural by another high-end French wallcoverings brand, Casamance.

“We needed to somehow get that urban feeling, which is where the graffiti wall came in,” Wentz says. “Matt was always very involved in picking his own stuff.”

“I was difficult,” Monsour interjects.

“He knew what he wanted,” Wentz counters. 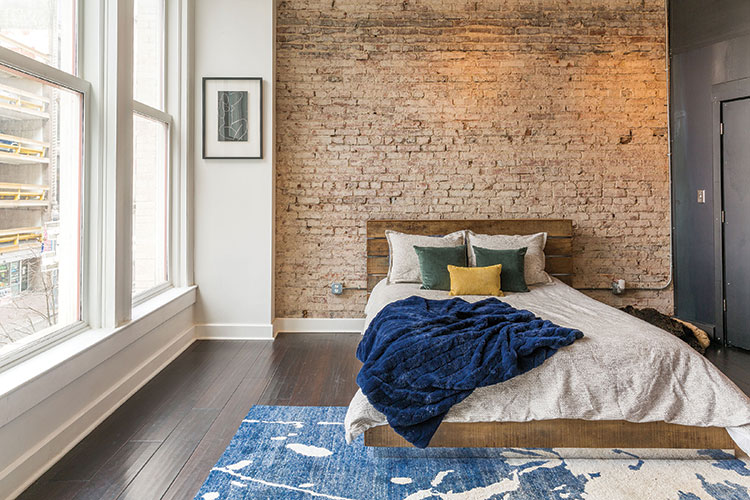 Monsour’s brick walls are home to more of his eclectic art collection featuring all Pittsburgh-based artists, among them Mia Tarducci, Zach Brown, Liza Brenner and Jesse Best. In the living room, a handcrafted console table by former Steelers player-turned-woodworker John Malecki sits behind a sleek custom sectional (the IKEA couch is long gone).

“It was important to me that the art be local because I do think we have such a vibrant art scene here, and this place sort of shows that off,” Monsour says. 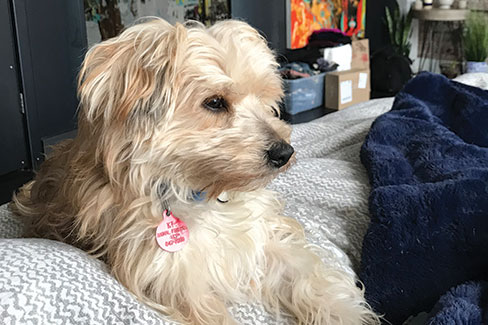 An animal lover, Monsour met Teddy when he helped return him to his leash for a homeless man Downtown. When he learned that Teddy’s owner was planning to give up the dog, whose back leg was badly damaged, Monsour, who sits on the board of Animal Friends, offered to take Teddy there for care and — after learning the dog’s leg would need amputated — he and his girlfriend decided to adopt him.

“Now I can’t imagine life without him,” he says. 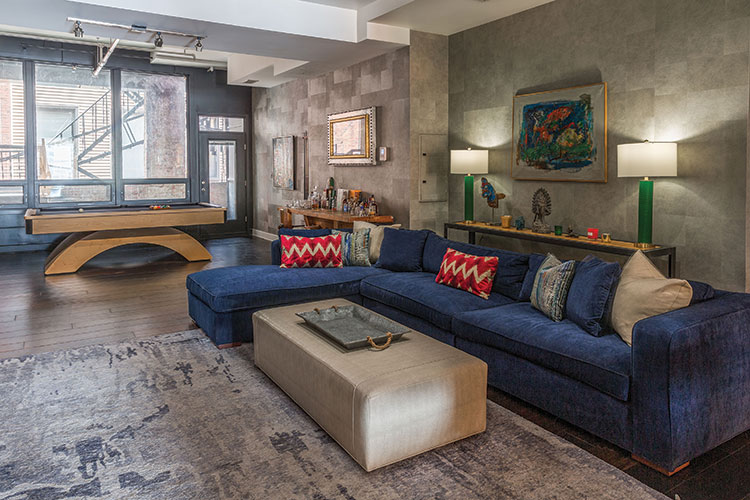 Monsour adds he has never regretted his decision to buy a place Downtown, where he takes advantage of his location to walk to shows, restaurants and even his office in Market Square.

His hope is that more retailers and more unique residences will pop up Downtown that utilize the vacant historic buildings while staying true to those buildings’ roots.

This article appears in the June 2019 issue of Home & Garden.
Categories: From the Magazine, HOME + Design, Hot Reads