A new day dawns with Donato’s, a promising addition to the Fox Chapel dining scene, presenting American fare and a touch of Italy.

Donato’s, a new American restaurant with an Italian twist, is hopping. Why? Because it fills a niche in the Fox Chapel area and region by offering a wide range of simply prepared food in a pleasant environment that is appropriate for a special occasion or for everyday dining.

Even before you take your first bite, there are omens that augur well for a positive experience. Getting there is easy—Donato’s is located in O’Hara Township, right off the Fox Chapel exit of Route 28—and there’s ample parking in Fox Chapel Plaza, where the restaurant is located. When you enter Donato’s, the handsome environment makes you feel as if you are at Capital Grille (more about that later).

The interior comprises three primary spaces: a large, open dining room, a bar and the kitchen. The dining room is dignified and understated, featuring earth-tone fabric wallpaper, wood and leather chairs, white tablecloths and large, dramatic, white light fixtures; a private dining room is available for patrons to use, too. Visible from the dining room is the kitchen, partially separated from the dining room with glass, providing the opportunity to watch the cooking in action.
Donato’s is a study in contrasts. While the servers may wear tuxedos, most of the patrons I saw were dressed in semi-casual attire. The contrast extends to Donato’s owners, too.

The restaurant opened in June by two partners: businessman David Tesone and chef Donato Coluccio. Tesone, president of Tesone Transport & Coal Inc. in Cheswick, Pa., has a self-described “passion for people and food” to go along with many years of business experience, which lead him to finally pursue his longtime wish of owning a restaurant. Coluccio, a graduate of Pennsylvania Institute of Culinary Arts (now Le Cordon Bleu), spent 15 years in the hotel industry as a corporate executive chef traveling around the United States, followed by three years as executive chef and partner at downtown’s Capital Grille.

The pair formed a concept that Coluccio describes as a “welcoming restaurant that offers recognizable food made with top-notch ingredients.”

The menu, which changes daily, consists of appetizers, salads, pasta, veal, chicken and meat. Providing a menu that truly accommodates the diner, Donato’s lets you create your own meal by matching a pasta shape to a sauce or by choosing a cut of meat, veal or chicken and having it prepared in any number of ways (blackened, broiled, seared and so on) and combining it with your choice of sauces or accompaniments. Also, you may choose to add a la carte side dishes (such as grilled asparagus or fingerling potatoes) to complete the customization of your meal.

A weakness of this concept is that you may choose unwisely. For example, I ordered the jumbo Gulf shrimp ($26) and combined the dish with a blend of roasted red peppers, oven-dried tomatoes and basil. I received a white plate with a neat arrangement of about five shrimp, which were grilled and seasoned only with salt and pepper, accompanied by a small pile of the red-pepper mix. This dish was too plain for my liking.

For appetizers, a very good choice is the Angus-beef carpaccio ($15) served with frisée, black truffle aïoli and Parmigiano Reggiano—an assemblage of flavorful, good-quality ingredients. Although only on the menu as an entrée, my companion and I requested a single crab cake ($14) as an appetizer. It was simple and respectable— a clump of jumbo lump crab loosely held together; the accompanying light and fresh housemade lemon garlic aïoli was so good that we ate it with our bread after the crab cake was gone.

A disappointing appetizer is the bruschetta ($8), which was topped with very bland chopped shrimp. The stuffed banana peppers ($10) are the most popular appetizer (though I did not sample them); they’re filled with ahi tuna and cured olives. 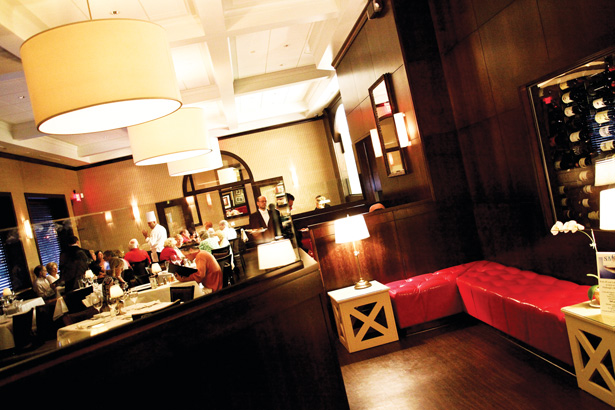 Patrons sit in the large, open dining room and chat between courses.

The entrées are straightforward and traditional: The most common seasonings are salt, pepper, oil and vinegar. My dining companion ordered the 10-ounce filet mignon ($33) and requested it with “no pink;” it arrived woefully overcooked (even for well-done) and was accompanied by an undercooked roasted-garlic bulb and tomato-parsley salad. Glancing around at the steaks on other tables, I saw varying levels of red and pink centers and concluded that overcooking was the result of our server trying too hard to ensure that there was absolutely no pink—not an overall reflection of a problem with the cooking of steaks.

The veal Marsala ($25) is classically prepared with crimini mushrooms, shallots and Marsala wine; however, the breading and sauce are both too thick, making the dish a bit goopy.

The pasta (I chose bucatini: a thick, hollow spaghetti) with white clam sauce is terrific. The light, garlicky sauce is packed with chopped clams, and then the entire dish is topped with additional shell-on clams.

Look for two standout side dishes (portioned to share): The grilled artichokes and asparagus ($11), starring large artichoke hearts with grilled Sicilian sea salt, stems and fresh asparagus in lemon oil; and the seasonal mushrooms ($10), featuring an assortment of portobello, crimini and shitake mushrooms sautéed with onions bathed in a rich mushroom broth.

The wine list offers a variety of choices by the glass and by the bottle (glasses from $9 to $15; bottles from $25 to $418).
Donato’s desserts are excellent. They are old-fashioned, Italian-influenced confections made by pastry chefs Jessica Shaffer and Kelly Kratsa.

The ricotta cheesecake ($11), light and airy on a buttery, traditional graham-cracker crust, succeeds with just the right level of cheesiness. The zuppa inglese ($12), which translates as “English soup,” (typically like a trifle) is to die for; Donato’s version is a layer cake that alternates thin layers of sponge cake moistened with triple sec and rum, with layers of thick chocolate, berry and vanilla pastry creams that act as frosting—wow ! The tiramisù ($11) was neither too dry nor too moist—definitely better than most.

Also, if you’re planning a special occasion, the restaurant staff will surprise the guest of honor with a two-person-sized, homemade chocolate or vanilla cake.

This restaurant has a clear sense of its own identity and goals: to deliver traditional food prepared simply and served in a tasteful, welcoming environment. Donato’s has found its niche.

This article appears in the October 2010 issue of Pittsburgh Magazine.
Categories: From the Magazine, Restaurant Reviews