While some local politicians say it will bolster the city’s economy, others worry about the dangers that hosting the event could pose. 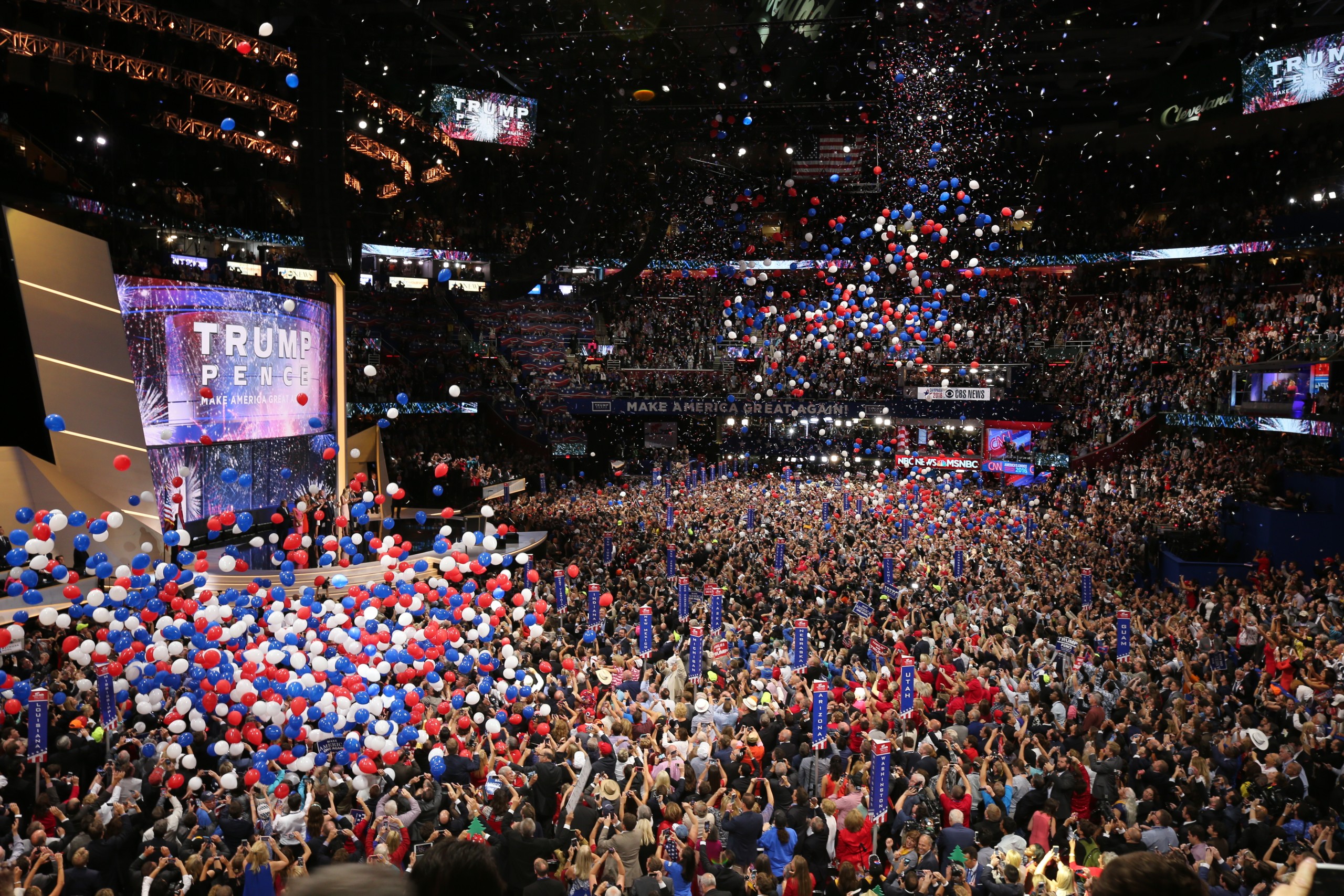 PHOTO VIA SHUTTERSTOCK | THE 2016 REPUBLICAN NATIONAL CONVENTION IN CLEVELAND, OHIO.

Less than a week into his tenure, Mayor Ed Gainey made waves this weekend when he voiced his support for a bid that would bring the 2024 Republican National Convention to Pittsburgh.

“Pittsburgh is a world-class city primed for economic recovery and downtown revitalization as we recover from the COVID-19 pandemic,” Gainey, a Democrat, wrote Saturday in a letter to RNC Chairwomen Ronna McDaniel.

He added that “the Republican National Convention would assist in building upon [the technology and innovation, education and health care] sectors of our economy with a direct infusion of over $200 million into our local economy supporting Pittsburgh’s incredible local businesses.”

A spokesperson for the RNC said that event organizers have narrowed their list of potential 2024 locations to four cities: Pittsburgh, Milwaukee, Nashville and Salt Lake City. Staffers will now travel to each of the four cities and further narrow the list.

According to CNN, where a party hosts a national convention is “widely seen as a symbolic choice that offers the party a chance to both build infrastructure in a key swing state and message to important subsets of voters.”

Supporters of the bid say Pittsburgh is a budding hub for innovation and new economies, making it a smart choice for the convention. They also allege that it could bring revenue to local businesses, who could benefit from the traffic such a large-scale event would bring to the city’s shops and restaurants.

“Some folks are enjoying the leftist meltdown over the news Pittsburgh is in the final four to host the 2024 RNC Convention,” he wrote. “Me, I’m disappointed that so many who call themselves “progressive” fail to see the benefit of $200 million in economic activity for the region.”

In a letter from November, Allegheny County Executive Rich Fitzgerald, also a Democrat, said he would “welcome the opportunity” for the city to host the RNC.

“Perhaps just as importantly for the site committee, Pittsburgh is conveniently located and easily reached by air, car and train,” Fitzgerald wrote, adding that the city is within 500 miles of nearly half the country’s population and within a six-hour car or train ride from 10 states and Washington, D.C., according to the Post-Gazette.

But local Democratic party leaders and city residents alike have voiced their opposition to the plan, citing concerns over the safety, optics and political ramifications the RNC’s presence could have. Registered Democrats in Allegheny County outnumber registered Republicans by 2 to 1, according to state election figures.

“The prospect of the City of Pittsburgh playing host to a political institution which harbors and propagates far-right extremism and anti-democratic sentiment misrepresents our values as a community,” wrote Jerry Dickinson, a candidate for Congress in PA-18, in a statement.

City Councilman Ricky Burgess echoed these concerns in a statement he released Saturday, calling the Republican Party “the party of hatred” when he implored VisitPittsburgh — one of the entities spearheading the endeavor to bring the RNC to Pittsburgh — to withdraw the city’s bid.

“The Republican Party stands as a clear and present danger to public safety and good order, not to mention public health. Republican-controlled state legislatures have passed laws denying women access to health care services and African-Americans access to the ballot,” Burgess wrote. “The Republican Party has worked to ensure that there are nearly [400 million] firearms in the United States while blocking laws to protect innocent Americans from those deadly weapons, even as these weapons increasingly find their way into our schools, temples, synagogues and churches.”

The tension comes as the nation reflects upon the attempted insurrection in the country’s capital, which took place a year ago on Jan. 6. It was carried out by more than 2,000 far-right supporters of Donald Trump, many of whom believed the 2020 election had been stolen and that Trump was its rightful winner — an idea that had been endorsed by multiple high-profile Republicans.

In his statement, Burgess also cited the Capitol attacks as a reason why the RNC should not be held in Pittsburgh.

“Having witnessed the vicious attack on the U.S. Capitol last year, where many Republicans tried to overthrow our government … it is clear that the Republican Party hates democracy itself,” he said.

Many took to Twitter to voice their concerns, including Emily Kinkead, D-Allegheny, representative for PA House District 20.

“Two days ago, we acknowledged the one-year anniversary of the #Insurrection,” she tweeted on Jan. 8. “Today, we’re inviting the insurrectionists to come enjoy beautiful Pittsburgh?! … — you’re not welcome here.”

Erika Strassburger, a Pittsburgh City Council member representing Squirrel Hill, Point Breeze, Shadyside and Oakland, replied to the Post-Gazette’s article about the RNC bid with her opposition, too.

“I realize I don’t get a vote here, but just for the record, I vote nope,” she wrote.

Another Twitter user wrote, “Retweet if you are a Pittsburgh small business owner who does NOT think holding the RNC convention in our city is worth the money. #RNCoutofPGH #NoToRNCinPittsburgh,” while another asked if there was an official hashtag to show city residents’ opposition to the bid.

Another yet opposed hosting any convention at all, regardless of location, until “this whole pandemic thing is in check.”

KDKA also reported that then-Mayor Bill Peduto had been asked to write a letter in November encouraging the RNC to choose Pittsburgh. He said no.