Courtney McFarlane is Master of the Fire

The Tessaro's grill master found a home in the restaurant's kitchen in 1987. 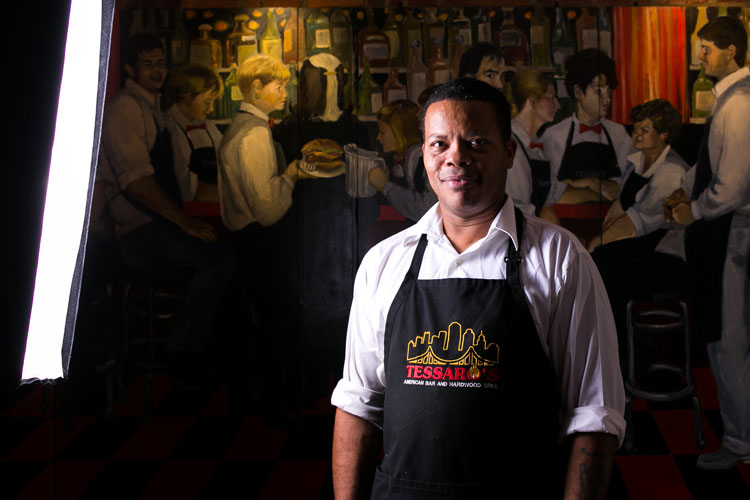 Courtney McFarlane has, over the years, honed his grilling technique to a point most of us would consider perfection. He repeatedly weighs 10 ounces of ground beef by feel, without the help of a kitchen scale. He fires, tracks and pulls 75 hamburgers in an hour. He keeps a hardwood fire smoldering at just the right temperature for 12 hours straight. He does it day after day, nearly every day, just as he has for more than two decades.

“You have to be very organized. And you have to have a very good memory of what you have on the grill. You have to know how to multitask,” he says.

McFarlane, 51, is grill master at Tessaro’s in Bloomfield, a position he’s held since 1998; he started working at the restaurant in 1987.

McFarlane emigrated from Discovery Bay, Jamaica, when he was 19, following the rest of his family, who had moved to Pittsburgh two years earlier. McFarlane learned about a job opening at the restaurant from his mother and took a position as the restaurant’s dishwasher. Although he was studying at Connelley Technical Institute at the time, he never ended up leaving Tessaro’s — the iconic Pittsburgh establishment is the only place he’s ever held a full-time position.

Tee Harrington, matriarch of the family that purchased Tessaro’s in 1985, took a shine to McFarlane, as did her son Kelly Harrington. They moved him up the ranks to prep cook, salad prep and kitchen assistant. In 1992, he moved to the grill, working under the tutelage of grill cook Mark Benz.

“There was no room for error. It wasn’t easy. I made a lot of mistakes. But I looked at Kelly and thought, ‘I don’t want to let this guy down.’ You get it together, real quick,” McFarlane says.

McFarlane also had another goal in mind: “I wanted to become just as good as Mark. Or even better.”

The two worked alongside Benz’s sister, Helen, for about six years. McFarlane says it took him nearly that long to feel close to having a mastery of Tessaro’s Bloomfield-forged cast-iron grill. When both Benz siblings left in 1998, McFarlane was ready to take charge as the restaurant’s sole grill master.

By all accounts, McFarlane has achieved his goals. He can read several moves ahead when presented a row of tickets, organizing the 3-foot-by-2-foot grill so that he can monitor the various degrees of doneness of the burgers. He instinctively knows just when to flip a patty — and, he says, more importantly, when not to. “Don’t keep flipping it. Let it sit, let it cook. The heat has to dissipate through the meat.”

McFarlane embraces the virtuosity of repetitiveness that comes with his grill master title. Occasionally, however, there are new challenges. The restaurant has over the years expanded — what once was a 13-table, 50-seat operation now seats 99 people. The kitchen didn’t grow with the restaurant, but, last year, McFarlane took a cue from backyard gas grills and added a second cast-iron rack above the original grates.

He also is passing on the zen of the grill to anyone who cycles through his kitchen, setting an example by following advice he’s honed in on after cooking thousands of hamburgers over a hardwood fire in the Bloomfield kitchen:

“I tell upcoming cooks that if you get frustrated or get upset, everything is going to be a big mess. Keep your cool, because, no matter what, it’s going to happen. Focus on what you’re doing and do it well,” he says.