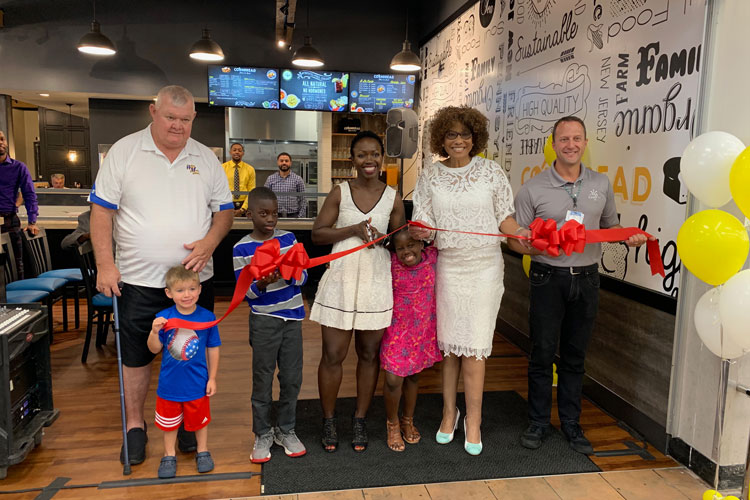 Walmart likely wouldn’t be at the top of the list of suggestions you or I would offer when someone asks about where to meet for lunch. If Adenah Bayoh and Elzadie “Zadie” Smith have their way, that might change.

Last week, the duo opened Cornbread at the Walmart in West Mifflin. It’s the first location of the fast-casual concept outside of its original restaurant in Maplewood, New Jersey. Diners can expect a menu of American soul food dishes such as fried catfish, fried chicken, ribs, candied yams, collard greens, cabbage and more. There is, of course, excellent cornbread, too.

“Too often, when people create something that is healthy, good and well thought out, they don't make it accessible for everyday people. We wanted to make Cornbread accessible,” says Bayoh.

Bayoh grew up on a farm in Liberia and her grandfather at one time owned a restaurant there. She immigrated to the United States when she was 13, a refugee escaping the violence of a civil war that raged from 1989 to 1997. Now 40, she’s crafted a career as a real estate developer and as an owner of a small chain of IHOP franchises in northern New Jersey.

Bayoh met Smith when she was looking for childcare for her first son — Smith’s “Zadie's Nurturing Den” came highly recommended by a friend. Smith sometimes made scratch-cooked meals at her childcare center.

“The first time I tasted her food, I said, ‘Miss Zadie, the world has to taste your food.’ And I constantly harassed her to do it,” says Bayoh. “It took years, and she finally said yes.”

The feeling of respect between the two entrepreneurs is mutual. “I think of her as a daughter. I've never seen anyone with such drive,” Smith says.

Smith grew up in a culinary family — her father was a chef and her mother a locally celebrated cook — in Tifton, Georgia. When she was 14, she was employed as a live-in domestic worker and was asked to make a cornbread stuffing from a batch of leftover cornbread. Not sure what to do, Smith called her mother, who walked her through the process over the phone. Over time, and many phone calls to her mother, Smith says, “I got it. I understood which seasoning went where and how long things should cook. And then I started experimenting on my own.”

Look for two additional Cornbread locations at the Tarentum and Greensburg Walmart stores in the next few months. In the meantime, add the Walmart in West Mifflin to your list of lunch options — I suggest you start with fried catfish, yams and, of course, cornbread.