Collier’s Weekly: The Top 10 Uses for an Old Stone Pier

The foot of the bygone Wabash Bridge is for sale. Here’s what we’d do with it. 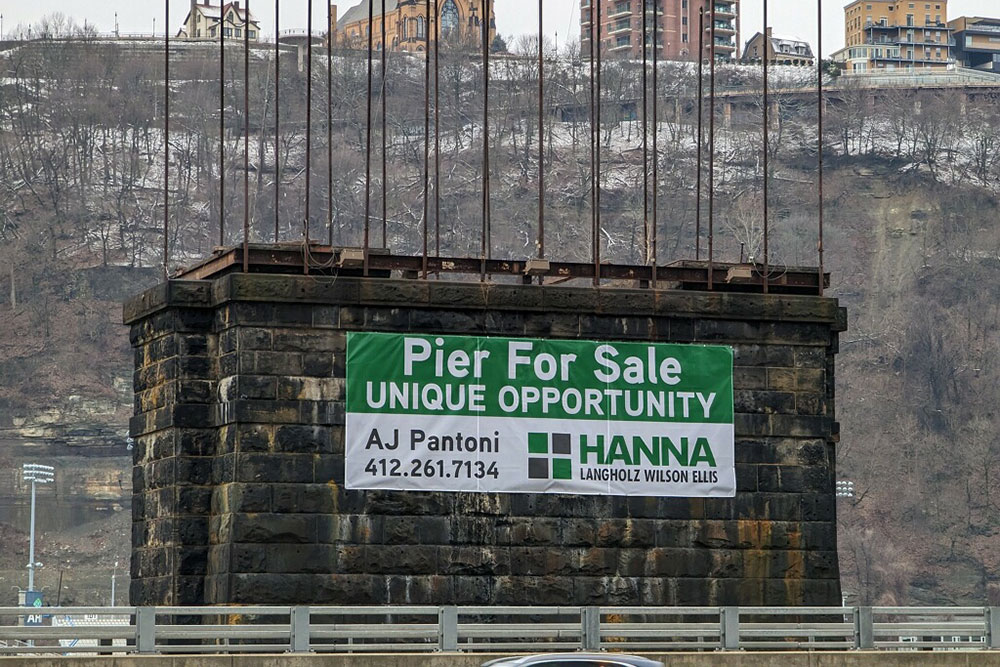 The noted con man George C. Parker made a dubious living selling things he did not own to unsuspecting victims. Unlike less imaginative swindlers, though, Parker peddled whole landmarks, convincing his marks that he held the deed to iconic locales such as the Statue of Liberty, Grant’s Tomb and (most famously) the Brooklyn Bridge.

Parker’s habit of selling deeds to the famous span gave rise to an aphorism: “If you believe that, I have a bridge in Brooklyn to sell you.” It’s become shorthand for gullibility. Modern Pittsburghers, therefore, are right to be suspicious of an unusual banner that has popped up Downtown, towering above the Mon Wharf.

It figures — Brooklynites get a whole bridge, but we only get one pier.

As reported by the Trib, though, this is no hoax; the northern foot of the bygone Wabash Bridge is privately owned and up for sale. The stone tower, jutting out of the Monongahela River adjacent to the Wharf, has been used for various purposes — from mooring barges to hosting art installations — since the 1948 demolition of the bridge itself.

While it’s a sturdy and well-located oddity, you may be wondering what, precisely, you would do with a hulking riverfront monument. Fortunately, I have some ideas. You can have them for free, just name the pier after me. (Or at least one of the nicer rocks.)