A perhaps unreasonable plan to reuse a little-traveled roadway. 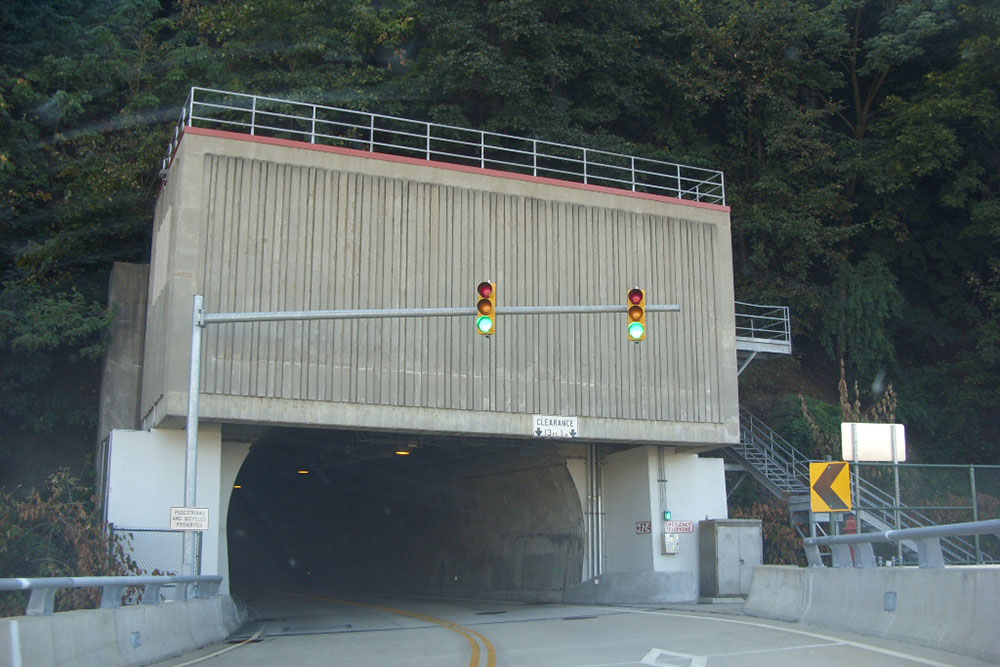 It’s raining as I write this.

It’s Monday morning. The last time I sat at my desk, on Friday afternoon, it was raining. The weekend was mostly a blessed break — but tomorrow, when this is published and appears in your mailbox, the forecast says it will once again be raining.

I’m fed up with the rain.

I know that complaining about spring precipitation in Pittsburgh is as tired a gripe as bemoaning the Pirates’ low payroll. But I just wrote a column about that, too, so here we are: It’s rainy, and  I don’t like it.

Am I going somewhere with this? Yes! Thank you for sticking around through that opening grumpiness.

The other day, I was trying to figure out if I could conceivably go for a run without spending much time exposed to the sky. There are, after all, a bevy of bridges around here, and plenty of overpasses to accompany them. Could an enterprising yet water-averse runner map out a route that avoids the tyranny of the clouds above?

The answer, unfortunately, is “not really.” If you take the North Shore trail and make some creative use of the Fort Pitt bridge onto the Boulevard of the Allies, you can have some decent stretches where you’re at least partly sheltered. But there’s nowhere I know of where you can safely trace the arc of an overhead obstacle and complete a dry run in wet conditions.

(If you’re thinking about pointing out the existence of treadmills at this point, yes, thank you, I know about treadmills. Unfortunately, they are — to use a very technical term — no fun.)

Knee deep in this thought experiment, I began to consider what it would take to get a decent run in, under cover the whole way. Short of turning some chunk of Downtown into a Vegas Strip-style indoor/outdoor thing, there’s not a lot of precedent; even installations such as New York’s High Line are, by design, open to the elements.

And then, I remembered a slice of civic folly that, most of the time, offers nothing to anyone: The Wabash Tunnel.

If you’ve never noticed the Wabash Tunnel, you’re not alone. Since 2004, it has served as a kid brother to its much more functional sibling, the Fort Pitt Tunnel; just a few hundred yards along the side of the mountain, the Wabash connects West Carson Street to Route 51 through the flank of Mount Washington. It operates one way at a time — usually outbound, but inbound on weekday mornings.

Doesn’t the Fort Pitt Tunnel already do all of this — in both directions, all the time? Yes. Yes it does.

So why is this plucky little tunnel there at all? It was a railroad tunnel until the 1940s, leading north by way of the bygone Wabash Bridge. After that, it endured a half-century of false starts. It was intended to be added to the Skybus system; Pittsburghers with long memories will recall that boondoggle, an endlessly touted piece of public transit that got a lot of time and money and never even came close to existing.

Later, PAT simply used the tunnel as a bus garage, reinforcing the entrances so no one would break in and smash up the buses. This plan was reconsidered after someone broke in and smashed up the buses.

By 2004, the tunnel was converted for vehicular use, but it doesn’t get a whole lot of action. You’re only saving time with the Wabash if you’re on a very, very specific route — like, say, from the Melting Pot to that BP on Route 51. If you have just had a big brunch and need to gas up the car, the Wabash Tunnel is for you. In all other scenarios, there’s a faster way to get where you’re going.

A modest proposal: Reclaim the Wabash Tunnel as a recreation area.

There are probably engineering and health reasons why it’s not advisable to jog through a dank, old tunnel. I’m here to say that we can overcome those limitations. (The conditions, I mean. At some fundamental level, it’s going to stay dank and old.) We add an array of cheap, LED lights. We sell ad space on the walls and use it to add water stations and sitting areas. Hell, we can set up food trucks, if we feel like it. (Uhh, select food trucks. Don’t want a jogging area smelling like sausage. Then again: Maybe we do? I’d run faster if I were going to sausage.)

Open it during certain hours with some degree of supervision, and I’d pay a few bucks to run around in there on a rainy day. We’d be turning a redundant, lonely road into an unlikely, only-in-Pittsburgh tourist attraction — if you lean into how weird it is to jog in a dank, old tunnel, it becomes quirky and unique! Pittsburgh: Come for the normal tourist attractions, and sneak in a jog in basically a cave!

Is this a good idea?

I don’t know. I just don’t want to run in the rain.