Fortunately, such places are on the rise. 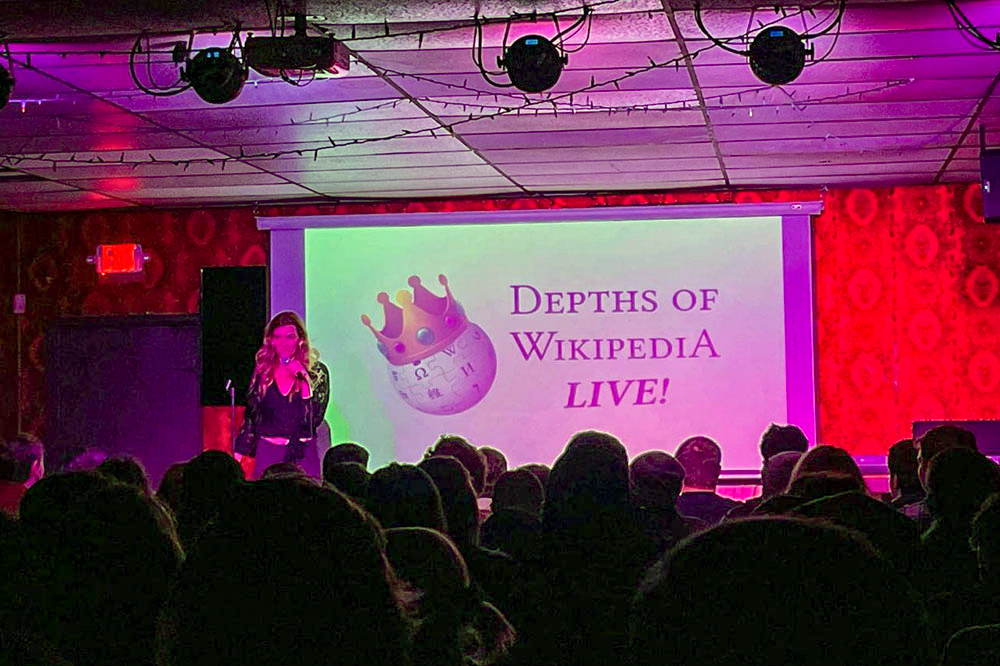 I’m sitting at the bar at Bottlerocket Social Hall, and I’m watching a presentation about bizarre Wikipedia pages.

The show — which sold out two nights at the Allentown venue — is the creation of Annie Rauwerda, whose social-media accounts @depthsofwikipedia mine the massive encyclopedia for unusual, aberrant or bizarre information and illustrations. “Depths of Wikipedia LIVE!” featured online drama, audience participation, a spontaneously appearing bagpiper and quite possibly the best Powerpoint I’ve ever seen.

It is also, as you might guess, something of an unusual show. Adjacent to stand-up and improv comedy but just as similar to a class presentation, it was the sort of thing that wouldn’t quite work at a traditional comedy club. It wouldn’t quite fit anywhere we’d call traditional, really. It can only take place at a venue that is more interested in the unusual than the predictable — the kind of place that not only allows for variety, but seeks it.

Fortunately, such places are on the rise.

In the post-COVID landscape, the places getting buzz are those that adopt an anything-goes mentality with their entertainment and events. (This is definitely true in Pittsburgh, though I hear it’s not explicitly a local trend.)

At one point, creative folks sought to open a space tailor-made to their preferred mode of expression — music clubs, comedy clubs, black-box theaters. Now, the winds seem to be favoring blank slates — places that are cool enough to draw attention on their own and are welcoming to whatever people want to put on stage, as long as it’s interesting enough to draw a crowd.

Bottlerocket is at the vanguard of this type of programming. In the next two weeks, they’ll welcome beloved yinzer raconteur Rick Sebak for an evening of holiday reminiscence; have a podcast taping from the affable Greenfield’s Finest crew; host a screening of the millennial Disney touchstone “High School Musical,” with a sing-along strongly encouraged; give the stage over to native stand-up Joe Kwaczala for a homecoming show; offer ’70s covers from the party band Dancing Queen; and do something with traveling performers Marcia Belsky and Jake Cornell (I’m not quite sure what they do, but I think it’s theater, kinda).

That’s a half-dozen events, none in the same genre. Or even the same medium.

To be fair, Bottlerocket is primarily — or at least equally — a bar, and quite a good one at that. They also boost their customer base with a novel membership system. But, along with other rising venues such as those at the distilleries Kingfly Spirits and Lucky Sign Spirits, Bottlerocket seems to be tapping into a desire for variety and unpredictability.

Something fun is happening, they’re saying; don’t worry about what it is. You can trust us to pick good stuff.

It’s an exciting development, and — while I love a small, purpose-driven venue — an encouraging one. As people (in Pittsburgh particularly) have become less inclined to leave the house, we need spaces that inherently generate excitement.

If two nights of full, raucous crowds for a Wikipedia show are any indication, Bottlerocket is succeeding.