Collier’s Weekly: Gorillas In Our Midst

At the Pittsburgh Zoo, a new virtual-reality experience offers an up-close look at gorillas in the wild. 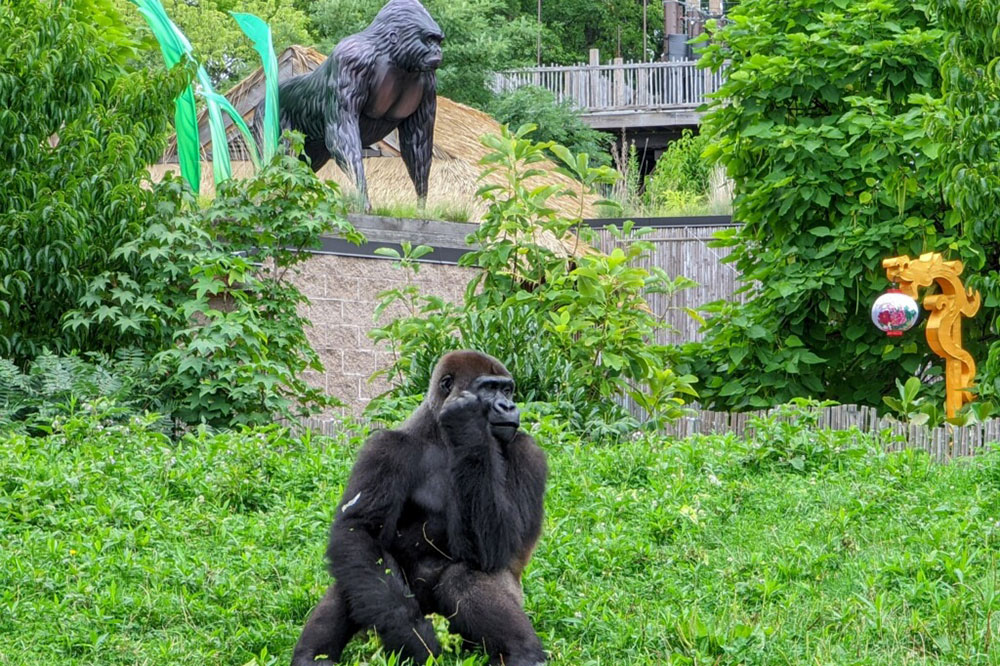 Several years ago, I was poking around the Pittsburgh Zoo after reporting on a new exhibit. For as long as I’ve been with Pittsburgh Magazine, I’ve made this a habit; I’ll take Zoo staff up on an invitation to preview a new animal or experience, then I’ll excuse myself and spend the rest of the afternoon wandering the zoo at my own pace.

On this particular trip, I found myself taking my time in the Tropical Forest — in common parlance, the monkey house. It wasn’t too crowded on this day, allowing me plenty of time to linger at each window, observing the often playful behavior of the apes and monkeys in detail.

As Ollie Gratzinger pointed out in a Places We Love feature earlier this year, it’s an excellent exhibit; you could easily lose an hour or more in there. I always found it brilliant, in a showmanship sense, that the fascinating western lowland gorillas were saved for last, in an indoor-outdoor habitat at the end of the pathway through the building. Perhaps no animal in the zoo is more watchable; these highly intelligent creatures are as charismatic as they are imposing.

On this day, one of the female gorillas was reclining against the slanted glass window that separates guest from ape. Calmly, but directly, I approached; even with the great angles afforded to visitors in the Tropical Forest, it’s rare to get a chance to study a gorilla with mere inches of separation.

I stood quietly, watching the gorilla as she occasionally regarded me between stretches. After a few minutes, another ape approached — a silverback, this time. I tensed slightly; while I have utter faith in the integrity of the glass and concrete, it’s difficult to convince your brain that the powerful creature headed towards you is no threat. Still, I wasn’t going to back away; I wanted the close-up view of the male as well.

He paid no attention to me at first, checking briefly in with his friend before turning to study something on the wall. I got in closer; what is he doing, I thought. He seemed to be inspecting a flaw in the paint, even peeling a stray piece of the wall — as if it were tree bark, I thought, rolling it between his fingers and …

It was at that moment that the gorilla hurled himself toward me with incredible force.

He ricocheted off of the glass; a thunderous boom, like dropping a steel drum off of a skyscraper, echoed throughout the monkey house. I leapt backwards, instinctively drawing my arms up in a timid gesture — I wasn’t defending myself, I seemed to be instinctively trying to look as pathetic as possible.

The silverback playfully ran to the back of his habitat, before turning to stare at me.

Just putting you in your place, he seemed to be thinking.

I later noticed a helpful sign on the wall introducing the zoo’s gorillas; the silverback in question is Harry, who the sign says “seems to enjoy startling people and can be a bit of a trickster.”

He sure as hell can.

I can tell you that, in that moment — with a 350-pound, staggeringly muscular ape hurling its agile mass directly at you — any semblance of higher thought goes away, replaced by a raw emotion somewhere between panic, shock and surrender. It was a remarkable experience, though one I don’t hope to repeat.

Instead, I last paid a visit to inspect the zoo’s new Gorilla Trek Virtual Reality Experience, a high-tech presentation that utilizes a virtual-reality helmet and responsive, theater-style seats to immerse guests safely in the midst of a family of gorillas in the Rwandan forest.

For $7, visitors can enjoy a 7-minute film that follows gorillas young and old (turn your head to try and spot a baby gorilla hiding behind you) through an eventful day in the forest. The movement is gentle, more like a 4D-style theater seat than a ride, but the illusion is total; between the ability to turn your head and look in any direction and the remarkable clarity of the images, you’ll forget that you’re not actually face-to-face with great apes.

And when they approach — just as when Harry sauntered over to me in the Tropical Forest — you’ll grip the handles, instinctively nervous about the oncoming animal.

It’s a quick, pleasant addition to a day at the zoo, and one that offers a rare glimpse at a natural habitat on the other side of the world. (It will also be open during the ongoing Asian Lantern festival.) If you’re like me, it’ll inspire you to backtrack to the Tropical Forest and take a closer look at the gorillas that call Pittsburgh home.

And if Harry’s in a playful mood, you too might end up with a close encounter. Don’t feel bad if he fools you; he’s pretty good at this trickster routine.